It’s been almost two and a half years since the last DJ TechTools key detection software comparison. Times have changed and the software has moved on, so we took a fresh look at the capabilities of Mixed in Key, Rapid Evolution, and Beatunes-  and we also discuss whys and wherefores of musical key, too. Ready to see which software won this time?

THEORY FOR DUMMIES (BY A DUMMY)

First, a crash course in music theory for DJs without any extraneous tangents. This might be tough!

A musical key is a group of notes that play well together, and in western major and minor scales there are seven notes out of a total twelve per scale. Major scales work by starting with a note  – this note is called the tonic, and becomes the name of the key – and moving up the semitones in the following steps: 2, 2, 1, 2, 2, 2, 1.  Minor scales start with the tonic and move up the semitones in this manner: 2, 1, 2, 2, 1, 2, 2 (there are a few special rules for different types of minor scale that involve differences when moving back down the notes, but for now this will suffice).

The scale pattern is always the same, so some keys play almost the same notes even though they focus on a different tonic (move up seven semitones to see this; only one note will be different between the two keys and it will be due to where available sharp/flat semitones throw the pattern). Because of the cyclical nature of moving through tonics – eventually you will come full circle – keys can be placed on a circle which indicates which keys are most similar, and this circle is called the circle of fifths. This is true not only for the major and minor scales independently, but there is also a relationship between a major and minor scale which share most notes. 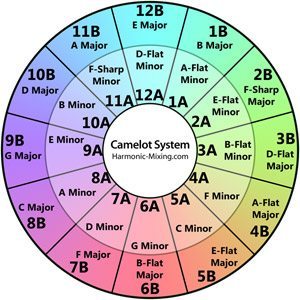 The Camelot wheel gives the twelve tonic scales a number, so that rather than having to remember the relationship between scales one can simply look for numbers – in the heat of the moment this is a simpler way to think about key relationships than memorising the circle of fifths.

The only way to find a key is to dissect a song and distinguish the notes that are playing. A good musician can do this by ear; in much the same way that learning to beatmatch tunes your brain to be able to distinguish different rhythm metres in isolation, training can enable you to separate pitches (if you have true biological perfect pitch and train yourself to recognise pitches as note values you can know a key almost instantly, whereas most of us aspire to a well honed sense of memory based relative pitch). You can also always play along with a song on a keyboard until you find the selection of notes that don’t clash and derive the key that way.

Computers can analyse audio files and pull apart the notes too. The reason for all this theory is to help you understand how to interpret the results that computer software comes up with and understand how relevant they are. Considering the above, you should be able to understand how the following can throw a computer (or indeed a human) key detector off the scent:

If a track has a key change in it, it will be impossible for a key detection programme to tell you what key the track is in for what should be obvious reasons. However if there is a little key drift or perhaps a small section of atonal (not in key) audio, we might hope that the software would have a punt at the most likely to be compatible. Similarly whilst we could forgive a key detection programme for not being able to conclusively tell us a key where one isn’t clearly defined, we’d hope it could be somewhat accurate in its guess of the tonic.

Why haven’t we included Mixmeister, as we did in 2009? Put simply, I don’t feel it’s particularly relevant at this point in time. It’s been more or less blown out of the water by Ableton Live, Traktor, et al, and buying a fully fledged, $200 piece of software simply to extract key information from it seems ridiculous.

Okay, so the test. From a broad but realistic pool of genres and styles I selected 50 tracks, cranked the accuracy sliders on the software up, and let them get to work. To ensure that the results of the software are being compared to accurate real world results I brought Mark Davis, creator of the Camelot Wheel and one of the major proponents of harmonic mixing, on board. Mark determines the keys of songs manually, and guarantees his results are 95% accurate; he has amassed a jaw dropping database of over 55,000 key matched tracks over 20 years of research and sells the database in book form (with regular electronic updates and an electronic search) from harmonic-mixing.com. 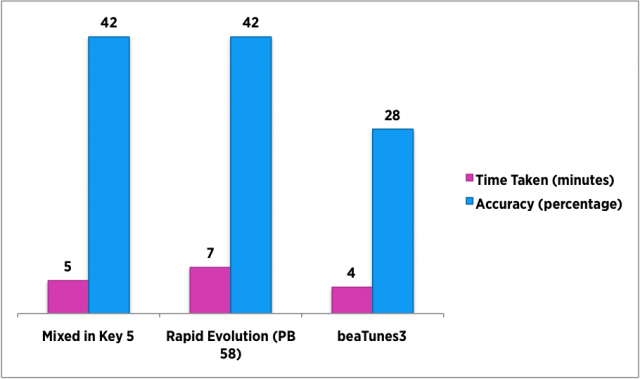 Time taken: 5 minutes
Good at: Looking good, detecting key and giving camelot values
Not so good at: Being affordable – it’s the most expensive option on test.

Time taken: 4 minutes
Good at: Integrating with iTunes and doing a load of housekeeping above and beyond key detection
Not so good at: Camelot mode – it doesn’t exist. It’s also the least accurate at our test tracks.

Time taken: 7 minutes
Good at: Detecting key for free!
Not so good at: Having a good interface.

If you have a massive library, key detection software can be a huge timesaver. The 2008 MacBook used is starting to show its age, but as you can see it handled the task with ease and time taken was simply not an issue for any of the software on test. As long as the software gets most right, you’ll be able to weed out the ones it messed up on or couldn’t detect and do those manually, or pay someone like Mark Davis to tell you. At $20 for 100 tracks from Mark – that’s 20 cents per track – you’re getting decent value for money if you’re not confident finding the keys yourself. If what you want isn’t in the database, though, you’ll have to wait until a listening session to get your custom choices recorded.

As for which key detector is the best, the numbers don’t lie. Beatunes was the quickest (although as mentioned there’s barely anything in it), Rapid Evolution and Mixed in Key were jointly the most accurate, and while Rapid Evolution’s free – MiK has a much nicer user interface. Those are probably the three selling points vying for your attention (excepting Beatunes’s inability to detect Camelot key), so if you’re determined not to pay then it’s worth giving Rapid Evolution a run through because it gets the job done. When all’s said and done though, for the one off payment versus the lifetime of easier use, Mixed in Key gets our vote. Just remember that nothing beats a well trained human.

More info on each software:

See the results of our 2009 Key Detection Software Smackdown!