In the past we’ve covered how to make DJ name drops and IDs, and at the request of a number of emails we’re revisiting the topic to discuss why it’s important to have a drop, on what formats to use them properly , and what new resources exist to make your own quality drops. We sparked a lot of controversy the last time we wrote on this topic – with a lot of DJs claiming that drops are always tacky and uncalled for – so we’ve made some clear guidelines for when throwing your name in the mix works in your favor.

A traditional DJ drop is a simple name drop of the DJ playing, usually thrown into the mix during a transition or break in the music. Stereotypcially, name drops are heard in three styles:

It’s likely a direct result of the overuse of these three styles that so many DJs abhore namedrops and find them as tacky as an airhorn sample. All three  are quite commonly found on radio stations – mainly because those are the resources that radio show producers already have around them (often sending quite a bit of promotional work to professional male and female announcers similar to those described above).

AN AIR OF IMPORTANCE

Many drop-seeking DJs see the above styles as models for producing their own drops, and I personally experienced this while working for a mobile DJ company. It’s understandable in that community of DJs because there’s such a strong emphasis placed on selling a sense of professionalism and authenticity to customers. Looking back on it, the recording below now sounds incredibly cheesy – but at the time I was ecstatic that our boss had these made for all of the DJs working for the company.

Beyond simply identifying the DJ, successful drops also lend credence to the importance of the DJ in the mix. For this article, we actually reached out to DJTT friend J. Espinosa (who you might remember from his cameo in this tutorial about switching out DJs) who’s been DJing major radio mixshows since 2001. He holds down three hour long mixshows every single day – two on 94.9FM San Francisco and one on KISS in Phoenix, so he’s an excellent example of a DJ who knows how to use name drops to success. His favorite drops showcase his connections as a DJ:

Name drops that I use are usually just artist drops, working for radio has its perks, we have a lot of artists roll through. I’ll usually use the ones that sound catchy, or if they have a cool accent. Name drops are great for branding. People remember cool name drops, I think every DJ should have at least one!

So let’s take the core lessons here: branding and authenticity. When a name drop works to remind the listener what the DJ is they’re listening to and does so in a way that makes the DJ important in/appropriate for the situation, and it does that without being overbearing, it’s a winner.

It’s always important to start the process of making something new by finding examples of those things that are really well done. We’ve selected a few favorites in this section – but we’re also interested to hear your own examples in the comments below of artists who use successful self-labeling samples.

Flosstradamus uses a classic vocoded vocal of their name with a stutter at the beginning to mark their mixes, remixes, and in their live sets.

Girl Talk restricts his own version of a name drop for just the intro of his set – right before coming out on stage, he plays a track that’s an tempo-rising chant of samples of people saying “girl” and “talk” respectively.


Also consider that a name drop doesn’t have to be the name of the DJ that’s in the mix – perhaps it’s the name of your label – as A-Trak is known to drop overtop of his mixes and radio show the drawn out “Fooooool’s Gold!” sample. Listen to it in the below teaser track at around 2:15.


Here’s another great tip: instead of a name at all, why not choose a signature sound or sample to associate your mixes and productions with? Crookers’ remixes often have their signature “Wow” sample, and producers in the recent popular Trapstyle/Future Trill genre has taken on their own favorite sample to simply identify their mixes with – “Damn, Son, where’d you find this?” 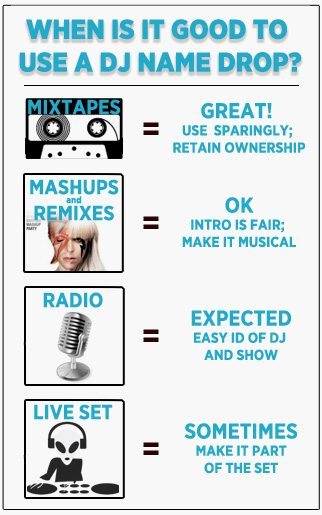 RULES: WHEN DO I USE IT?

As many responses from us posing the question on Twitter last week indicated, there are clearly times, mediums, and genres where it is and isn’t appropriate to use a name drop. We’ve put together a brief set of guidelines as to what works below.

In mixtapes, it’s appropriate to pepper your mix with a variety of call-out samples that remind the listener who’s the curator and mixer behind the mix,- this is especially appropriate in longer, radio friendly mixtapes. Additionally it’s handy to make sure another DJ doesn’t slap his/her name on your downloadable mix and claim it as their own.

In original tracks, remixes, and mashups, it’s generally acceptable to put a drop in the introduction or outro, but when you’re producing a track that you want other DJs to play out, don’t break the feeling of the song just because you want to be recognized. J. Espinosa takes this point a bit further:

I personally hate when producers/remixers slap their name drops into songs. If it’s in the beginning of the track, and its subtle, that’s ok. If I download a track thats “Produced by ____” I think that’s great, but I don’t really think its necessary to hear who produced the track while its being played.

If you’ve got a cooler/more musically integrated shout-out, consider editing it to keep it interesting – for example, chopping the sample up in time with the rhythm of the song like in this 2010 remix by The Girls Can Hear Us:

On broadcast and web radio, DJs and radio programs use drops fairly regularly to remind people what they’re listening to and who’s in the mix  – as well to protect any exclusives and world premieres that are being broadcasted as a part of the show. Radio One has exclusive tracks all the time and has to prevent bootleggers from ripping the track for nefarious purposes, so Pete Tong and friends throw protective drops into these particular songs:

Live DJ sets and club gigs is where the drop seems the least appropriate. Most of the time, the DJs who are playing have their names all over the event already, and pull out a significant crowd. Perhaps a very rare drop might be alright, but they often feel absurdly commercial and out of place at house parties, warehouse ragers, and so on. If you’re going to use a drop, either save it for the beginning or end of your set, or it has to fit with the music.

Why not take this opportunity to make some kind of performance out of it? Scratch DJs are the model here – if you can cut up your own drop in a mix, it’ll show off your skills without breaking the groove. Genre/context of the event can be a factor as well – in a more Top 40-focused club, DJs are more able to get away with throwing in their name into the mix than at a deep house party.

HOW TO USE YOUR DJ DROP

Just like any kind of sample playback, timing is everything. Remember that no matter how cool your drop is, people will get sick of it if you use it during every transition in a mix or all over a song.  You also don’t want to kill the vibe of the song you’re playing or drown out the vocals- here’s J. Espinosa’s thoughts on when and how to throw in your IDs:

Preferably DJs shouldn’t hit drops over parts of songs that have words. For radio, I’ll use ’em either before the climax of a song, during a build-up, or over an instrumental. Or get creative and insert your name drop in where another word of a song is, like live wordplay.

I love to use effects on my name drops. I’ll add some echo and tweak it over beats. I don’t really think there are many rules to hitting name drops. If it sounds good, then do it – but too much of anything is never good, so also keep that in mind!

GETTING YOUR OWN DROP

Hiring a professional to record your drop will sometimes be the right choice – especially if their voice matches the sound you’re going for – but don’t doubt your own ability to record a decent quality drop.  We covered the basics of making your own drop in a previous article, including how to record a clean drop into Ableton and using your computer’s built-in speech-generation programs, but we wanted to add a few other ideas into the mix: 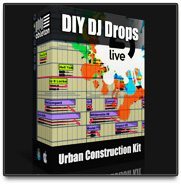 To give you all a tool to get started with, we’re giving away 15 copies of a “DIY DJ Drops Construction Kit” Ableton package from the folks over at Mixaloop who make loops and samples for DJs and producers. In addition to hundreds of FX and Vocal samples, the package provides an Ableton template as a starting context in which to place a “dry” version of your drop and gives it the traditional radio-style context complete with vocal and mastering chains, compression, etc.

What Unique Gear Do Top Producers Use?

DJing In Extreme Conditions: Burning Man and Beyond

Bedroom DJ Woes: Why You’re Not Getting Booked (And What To Do About It)

Even More Documentaries for Producers and DJs