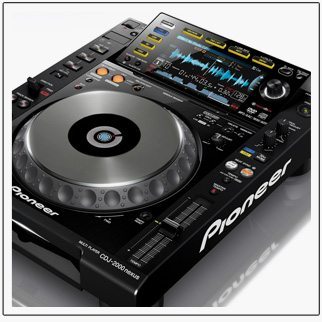 As teased earlier this week, the new Pioneer CDJ-200 Nexus units have dropped with a brand new feature set, including the expected wireless Rekordbox functionality, tempo and beat synchronization, color-based key indicators, advanced slip modes for loops, reverse, and scratching, as well as a slew of other improvements. Read on for more details and the official Pioneer release videos featuring Eats Everything, Kissy Sellout, and Laidback Luke.

While the new players are seemingly chockfull of new ideas and improvements the three major new features on the CDJ-2000 Nexus that we’re most interested in and that warrant a bit of discussion include:

Obviously the first thing on most of our minds: how much is this kit? The suggested retail price is $2,399 – about $500 more than the CDJ-2000 Mk1s are selling for around the internet. A pretty penny – especially considering you’ll probably want  a set of them to really use all of these features in a setup.

Editorial Update: As expected, the debate rages on across the web about how adding sync features is the best/worse idea ever. Big-name DJs are already weighing in on Twitter with their thoughts – check out two highlights below:

Good DJing is selection, it’s timing and pacing, it’s creative mixing, it’s the art of weaving songs together. Use whatever you want.

A sync function won’t prevent people playing shit tunes. What to play and when to play it is what makes a good DJ, not the snares lining up

Pioneer has three videos out – all performance videos showing off the new feature set as listed below. It’s really nice to see Pioneer product release videos that feature off technical routines and show the potential of the kit as opposed to how cool you’ll be when you buy it, like with the lower-end controller releases we just saw.  Check them all out in the links at the end of this article or watch the Kissy Sellout video below:

Obviously there have been a few other major and minor updates on these new units, and we know how you all love the technical details, so here’s the full feature set straight from Pioneer:

Industry’s First DJ Player with Wireless Source Capability
The CDJ-2000nexus can utilize different music sources, from a hard drive to USB thumb drive and/or SD memory card, and now for the first time, an iPhone, iPad and iPod touch and a computer via Wi-Fi. Using Pioneer’s rekordbox App to create playlists, cue/loop points, beat location settings, waveform analysis and more, users can temporarily transfer the content wirelessly through Wi-Fi to the CDJ-2000nexus. Users can also perform the same wireless function with a Mac utilizing the rekordbox music management software.

New rekordbox Software Functions
With the included rekordbox music management software installed on a computer, users can organize and catalog their entire music libraries. Newly added features available when rekordbox is used with the CDJ-2000nexus include music file analysis functions such as Wave Form Zoom (wave form expansion) and Key, as well as additional settings such as Active Loop and Hot Cue Auto Load.

When music files are imported to rekordbox, the software analyzes each file and prepares it for use specifically for the CDJ player.

Full-Color LCD Display
The CDJ-2000nexus features a large full-color WQVGA 6.1-inch (480 x 234) LCD panel for displaying song titles and album art as well as detailed track information. The Wave data of each song is also illustrated on screen and the new Wave Zoom function provides five different levels of magnification of the wave data which are color-coded according to bandwidth.

Pro DJ Link
Pioneer’s Pro DJ Link feature enables up to four CDJ-2000nexus players to connect via the Link Port and share a single music source. Additional functions added to the CDJ-2000nexus that can be accessed when other players

are connected using the Pro DJ Link are:
• Beat Sync – Tempo and beat location of music currently playing on one of the device can be matched with the push of a button.
• Traffic Light – Shows the keys of music being played by any players connected via Pro DJ Link, making key-compatible music easier to find by a different color indicator.
• Beat Count and Phase Meter – The Beat Count, which is the number of beats until a set point (memory cue), and the Phase Meter, which shows the beat/bar of the music, can also be displayed simultaneously by other players.

Performance Functions
Pioneer added Slip Mode and Quantize functions to the CDJ-2000nexus for added performance and reliability.
• Slip Mode – When activated, Slip Mode silently continues song playback during a loop, reverse or scratch and continues audible playback at the exact time when the loop, reverse or scratch is ended, resulting in smoother transitions.
• Quantize – Utilizing a Quantizing feature, cue points and loops can be set perfectly on-beat. The Quantize feature ensures cue points are set accurately and automatically, correcting and synching beats during manual looping or real-time cueing to reduce off-beat mistakes.

• My Settings – The function settings of a player can be saved to an iPhone, iPad or iPod touch, USB storage device, SD memory card, or other device. For additional convenience, the settings can also be can be made ahead of time on the rekordbox App or software allowing users switch to their settings when a connection is made to the CDJ-2000nexus.

More Features:
• DJ software MIDI/HID control – Up to 35 controls on the surface of each player can be used to trigger other devices, such as DJ effectors and software by way of HID and/or MIDI.
• Active Loop – Automatically starts loops when playback begins from a specified point.
• Load Previous Track – Playback of prior music that has been loaded to the player.
• Rating on the Go – Users can rate tracks during play for easy reference or sorting.