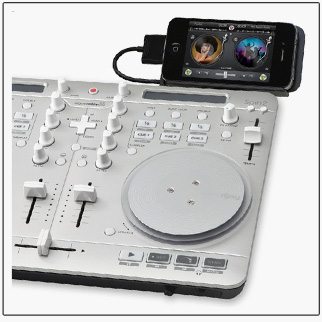 Continuing a long week of pre-BPM gear announcements, Vestax has announced that they’ve been working on a second version of the Spin, the Spin2. The unit takes the portability and slim package of the original Spin and applies it to workflow and usage, in that it’s designed to work seamlessly with the desktop, iPad, and iPhone versions of Algoriddim’s djay application. The controller is clearly designed to be an introductory controller for those looking to grab a few tracks from their iTunes library and start mixing right away.

As far as the unit itself, it looks very similar to the design of the original Spin – the main noticeable differences being the strip search touch sensors at the top of each deck and the replacement of the unusual fader EQs for more traditional pots. The unit also is a bit more subtle than the Spin, with no brushed metal jogwheel plates.

Check out the Vestax announcement video below showing off some of the coolest features of the new kit:

Complete djay integration is pretty awesome – especially because that the unit can take advantage of iOS 6’s Multi-audio Support, allowing DJs to have both cue and output audio in complete stereo.

The unit has a suggested retail price of  $349 / €329 / £269 and will be released in December, likely just in time for the winter holiday season – and perhaps like it’s predecessor, you might spot it in Apple retail stores…