Earlier this week, we learned that one of our members, Arkaei, had not only held down his third winning title in the German International DJ Association championships, but also went on to compete in the World Finals. While he he didn’t make it onto the podium, he still rocked the stage with a wild setup: two Electrix Tweakers, a Moog Etherwave+ theremin, an Access Virus TI, a Kontrol Z2 and more. In today’s article, Arkaei himself breaks down his workflow and gear, as well as a few insider tips exclusive for DJTT readers!

Editor’s note: a quick bit of background – the IDA (International DJ Association) is a modern version of the former ITF (International Turntablism Federation) whose yearly battles were one of the major international competitions of turntablism. The IDA was founded to modernize the ITF’s contest, and has been in operation since 2007.

On Nov 24th 2012, I managed to defend my title as German IDA Champion in the Show Category. This third consecutive win granted me the opportunity to compete at the World Finals in Kraków, Poland (see the set in the video above). Despite not being much of a turntablist, I managed to turn quite a few heads with my routine because of its sheer nerd power; the Show category is less about technical scratching and more about live performance, so I focused on that. In this article, I’ll walk you through my entire setup and workflow as a “thank you” to the DJTT community – I learned a lot from you guys, it’s time to give something back. 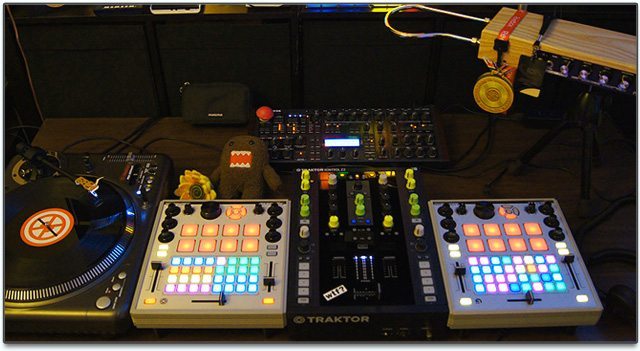 When working on new material, I always start on paper. It helps me get the basic stuff laid out before I go deep. As you can see below, I was planning to use an iPad running Lemur at first, but in the end I decided to drop it for the sake of physical pads and faders, of which there are plenty on the Tweakers.

Besides that, this crude scribbled draft is essentially the final setup; let’s take a closer look at it. The Z2 is the Traktor audio interface, the Virus serves both as a synth and as the audio interface for Live – it’s going into the B channel on the Z2, which is set to Live Input inside Traktor so I can apply Traktor’s FX to whatever comes out of Live. 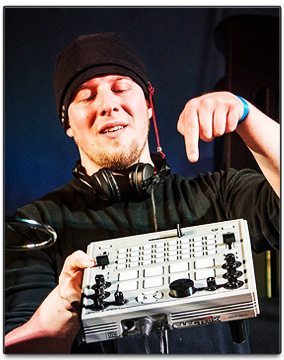 The Tweaker on the left controls Traktor (FX macros, activation, wet/dry, hotcues, track key), the Tweaker on the right controls Live – but it’s also the unit I am using to send MIDI from Live to Traktor (the 5-pin MIDI ports on these units really come in handy). The big pads on the Tweakers are velocity sensitive and have aftertouch – so on the Traktor Tweaker, I am using them to control effects. On the Live Tweaker, they are set to full velocity and trigger one-shots from a drum rack. The theremin goes into the Virus’ input and is processed inside Live – we’ll get to that later on.

My set starts at 142 BPM and goes up to 174 BPM, so the first big challenge I faced was: how do I get Traktor’s internal clock (which affects the beat-synced effects) to stay in sync with the stuff that’s happening in Live? On Windows machines, getting Traktor to slave-sync to external MIDI clock input is literally impossible; I even talked to NI support about this and they couldn’t help me, so I had to find another solution. Turns out there is one, and it’s not that hard once you figure it out.

First set up Traktor to send MIDI clock and activate it in the Master Tempo tab . A clock signal from Traktor isn’t necessary when slaving it – but when it’s activated, it enables you to retrigger the internal clock.

There’s just one simple command that you need to map: “Clock Trigger MIDI Sync”. Next, map “Set Master Tempo” with fixed parameters of 142 and 174 BPM respectively. Finally, set up a MIDI track in Live and have it send the appropriate notes. I chose to trigger both commands on the first hit of every beat; this may be a little over the top, but I didn’t have time to test it thoroughly and this way it’s always tight.

Check out what DJTT’s Mad Zach did with Ableton and Traktor synced.

I also had to consider MIDI offset; since there is a slight delay from Live (the Virus is set to a brave 128 samples) and the sound is going through Traktor instead of regular input on the mixer (which is set to 256 samples and 2ms USB latency to rule out dropouts), you’d think you have to send the MIDI from Live to Traktor a few milliseconds earlier to compensate. However, to my surprise, the audio delay balanced out the MIDI delay perfectly, so I could immediately cross that off the list of possible headaches – but keep it in mind because it may be an issue on your machine when you attempt something similar.

Since I only have two hands, I had to automate some parts of the routine – like loading new tracks into deck A inside Traktor. This can be easily accomplished via MIDI as well – I had a sorted playlist inside Traktor, and at appropriate points in the set I triggered the “Load Next” command via MIDI clips; easy. But then I ran into trouble: with both program windows open, sometimes I had slight dropouts during track loads that I could neither reproduce nor fully get rid of – this forced me to minimize the programs, successfully preventing me from looking at the laptop at all during the performance, which makes the whole thing a bit harder but also kind of cool.

I wanted some kind of feedback from Live, to see where I am in the set – especially since I didn’t have enough time to practice it, and when you’re standing on stage at a world championship there is a bit of pressure no matter how experienced you are. Then I realized I have the perfect unit to make up for that: with its bright multi-color LEDs, the Tweaker can pull off quite a light show.

I made MIDI clips that trigger the LEDs on the right Tweaker as the set progresses, with specific colour bursts indicating stuff like “Traktor is about to load the next track”. This helped a lot, and I also used it to enrich my intro: even though I represented Germany, my nationality is Polish – and since the championship took place in Kraków, I decided to use edited quotes from a very popular Polish movie in the intro to win over the audience and also show the Polish flag (white over red) on the LEDs of the Tweaker. This little maneuver worked perfectly and the response was awesome! If you’re curious about the meaning of the samples, head over to my site for the translation. Shameless plug completed.

For the transition from 142 to 174 BPM, I decided to play a huge pad from the Virus, using three macro knobs to modulate the sound while the tempo of the set increases. During the Drumstep/DnB part, I’m mashing buttons on the grid of the right Tweaker; these trigger gated dummy clips that talk to Izotope’s Stutter Edit and Sugarbytes’ Turnado. Combined with Traktor’s internal effects, I can seriously mess stuff up this way. I admit I overdid it a bit in the routine, but as I said… standing on that stage is a little different than rocking a club. 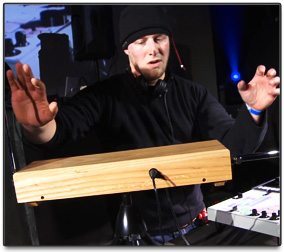 WAVING YOUR HANDS ABOUT

The theremin is a wonderful instrument as is, but it has a rather simple sound and requires the player to stand absolutely still because the slightest changes in hand position are immediately audible in the pitch. That’s not really what you want as an EDM musician, so I had to make it more interesting and less restraining.

I ran it into Reaktor, using “The Mouth” which is set to beats rather than pitch mode and then controlled by MIDI notes sent in from another channel. In beats mode, if the key is locked by inputting a MIDI note, raising the pitch of the input sweeps through the formants of Mouth’s vocoder – which kind of makes sense if you think this mode was intended for beats rather than tones. The pitch antenna (the vertical one) controls the formant of the vocoder. The volume antenna (the round one) affects filter cutoff, because I’ve got an instance of SugarBytes’ WOW filter behind Reaktor in envelope follow mode. This turned out to be a slightly complex and CPU-hungry, but very playable beast, and I love the fact that despite the digital processing it still retains part of the analogue character – because the theremin sounds a little bit different every time, and that has a tremendous impact on the tones that “The Mouth” produces. 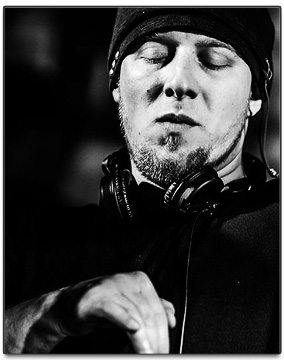 I only spent about a week working on this whole thing – including production, arrangement and defeating all those crazy technical issues; the theremin alone took forever to set up. This is the reason why I made a few mistakes during the performance – I just never got to rehearse it in full because I was still making final adjustments in the hotel room, which is of course my own fault for having a full-time job (I may have to fix that for 2013). I’m still very happy with how it turned out, and going to the world championships was crazy awesome; even with as many as 13 countries involved, there was NO hostility at all among the competitors – we were all having fun and supporting one another. Love and respect, this is how it should always be.

Got questions for Arkaei about his setup or performing in a major DJ competition? Ask away in the comments!

& Beyond: DJ Shiftee Talks Through His New DJ Routine Series