In DJTT HQ, many of our staff have grown to love the Pioneer RMX-1000 for its dynamic and expressive isolator effects. But even in our initial review of the unit, readers pondered if Traktor could be made to emulate this style of effect – and finally one of our own DJTT community members has succeeded at building a mapping that does exactly that using a secondary deck. Read on to learn more!

ISOLATION EFFECTS IN USE

First off, major congratulations and thanks to DJTT member Stewe are in order for pioneering this advanced performance technique in Traktor. It’s an impressive feat to map out a new performance style, even it if is a well-known type of effect used on the Pioneer RMX and many of the high-end Xone mixers. If you’ve never had a chance to use isolation effects before, their premise is simple: they’re used to apply an effect on just one isolated frequency of the mix (in this case, highs, mids, or lows). This is great for smooth buildups, as well as creating interesting transitions and breakdowns.

Let’s dive right in, and first take a look at Stewe’s video demonstrating the isolation effect (he’s using T3 Delay in this example) being used with his mapping for the Livid CNTRL:R:

“In video you have seen I’ve used T3 delay, but this principle can be applied to any of other effects and that’s the beauty. Imagine dropping echo-freeze on mids and reverb-freeze on lows and highs right on a transition, love it.” – Stewe

It wasn’t completely clear in the video, so we reached out directly to Stewe to learn exactly what’s going on in this mapping and how he achieved this effect. The cliff-notes version of it is that he’s using the fourth deck (Deck D) as the source for  affected sound. The mapping duplicates the deck in focus to deck D and as the effect knobs are moved clockwise past 12 o’clock three things happen:

All things considered, it’s a pretty elegant solution, and for those Traktor users who never venture past Decks A + B, the mapping finally presents an intelligent use of that fourth deck. 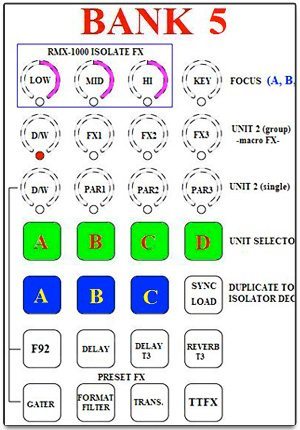 Stewe has uploaded the mapping to Maps.DJTechTools.com – meaning that it’s a free download for anyone with a free myDJTT account. At right is the basic layout of his Isolator Effects section – which actually loads in as its own device mapping in the Controller Editor’s dropdown menu.

On building the mapping, Stewe writes:

The idea [behind the mapping] is to map a modifier that can toggle between two different values, but to make this value change at rotary pot center (12 o’clock) giving me value ‘0’ at one side and value ‘7’ at other. I managed to map this using encoder-relative in modifier settings. […] To be honest, it took a while to find correct modifier settings to achieve RMX-1000 result.

Of course, if you’re not packing one of Livid’s CNTRL:R units in your setup, you won’t be able to use this mapping out of the box without a bit of tweaking – read on for the plan of attack.

Based on the initial feedback that we’ve already seen on the forums, we’re pretty sure that you all will be equally as excited as us to try a version of the isolation effect for your own controllers.

Before we tap the likes of mapping wizards Flashflooder or Beaubryte to take on this mapping challenge, we wanted to gather feedback from the community about what controller and type of isolator effect workflows you’re interested in. Here are some prompts to get you started in the discussion – be sure to read what’s been written so far and vote up the ideas you like!

We’ve written about isolation-related techniques in the past – read our Introduction To Mixing With DJ Isolators.