We’ve known that Traktor DJ, the Native Instruments iPad app was coming since it was teased just before NAMM – but today the official news is out. Traktor DJ is an app originally conceived as a two-deck touchscreen version of Traktor Pro, but also packs solid track preparation features that are synced via Dropbox back to your collection. Check out the exclusive videos inside to get a better idea of what Traktor DJ is all about and how well it performs.

Just here for the giveaway? Click here to jump to it.

What It Is: Traktor-on-the-go for both two deck mixing and track preparation.

Ean was allowed a sneak preview of the app prior to launch, so to give you all a better understanding of exactly how the app works and what it feels like, he filmed a quick talk/walkthrough of the application. Check it out and then read the full feature set and discussion in the rest of the article below. 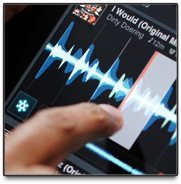 Freeze Mode – Press on the snowflake icon for access to instant cuepoints and resampling across the entire waveform in the deck at the moment – the track keeps playing unless you’re in loop mode, when the playing loop stays on the screen. It’s pretty fun to play with, and the quantization can be set in the preferences.

Collection Synchronization – Everyone who has ever wanted a way to get their collection up to snuf with beatgrids, cue points, and loops on the go will be happy to know that NI seems to have this figured out with Traktor DJ. Using synchronization of collection data via Dropbox, you can make changes on your iPad or your computer and the changes will sync up. It’s just passing collection data (.NML files) – you still have to import your playlists across to the iPad via iTunes. 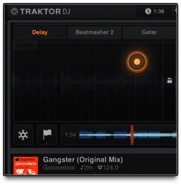 X/Y Effects + Filters – This one’s kind of a no-brainer on iPad DJing apps, but Traktor DJ has done it well. Both the EQ/Filter pane and the Effects pane smoothly slide out over the playing track, making it relatively easy to control both at the same time. They both feature a hold/lock setting, which is very helpful when you’re limited to touch controls – and Traktor has included all of the basic effects from Traktor Pro like Reverb, Beatmasher, and Gater.

Key Detection – Right along side of Traktor’s update, Traktor DJ comes wrapped with the same key detection system. It’s likely being used to power the feature below. 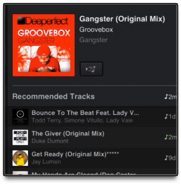 Track Suggestion – Traktor DJ clearly has a slight bit of a simpler vibe to it, meaning that beginner DJs will be able to download the app and just play. This likely is part of the reason for Traktor building a track suggestion feature into the software, which uses key and tempo to determine a set of potential matches for the next track. If you’re a big stickler on making sure you mix in key, this feature might help you find just the right track that much faster.

The video above shows both intended use cases with Richie Hawtin during a day’s span – yes, he really did play a gig on the app. This brings up a question of stability- and the software seems rock solid in our tests. The app is smart enough to stop the iPad from sleeping – allowing the screen to dim slightly but not all the way.

While the Traktor app does allow you to do traditional iPad split-cueing for audio out (meaning your stereo headphone jack is split into two mono outputs for the cue and the master out respectively), you can use an CoreAudio-enabled soundcard with the software. Audio interfaces that can be used must be Core Audio ready, and must have their own power supply as the iPad cannot power a soundcard. NI writes:

Because of the powerful Core Audio engine built into iOS, TRAKTOR DJ also offers ultra-low latency playback, manipulation and recording while also supporting professional class compliant hardware audio interfaces, such as the TRAKTOR AUDIO 6 and 10, something currently not possible on any other mobile platform. DJs can connect these and other devices to their iPad using the iPad Camera Connection Kit™ for optimum audio quality and pre-listen and cue functionality, or to a splitter cable with dedicated cue and master controls.

At launch there’s no MIDI control, or integration with any of Traktor’s products like the Kontrol Z2. Also to note- the Audio 6 and 10 drivers were just updated to become Core Audio complient, so grab those over in NI’s downloads center. 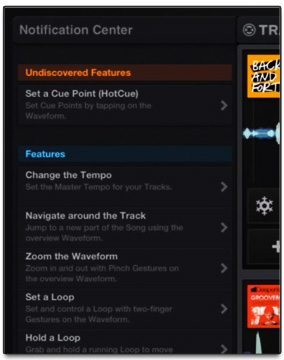 LEARN HOW TO USE IT

Not every single control is exactly as you might expect on iOS – with some looping and zooming related gestures feeling different from Traktor and other iOS applications – but no application is without a learning curve. In our conversation with NI, they mentioned the balance that they had to achieve when designing such an app:

“We believe that Traktor DJ strikes a balance between instant, fun usability and advanced, professional features. While the gesture-based interaction around the waveform should be intuitively familiar to users of the iOS platform, we concede that there is somewhat of a learning curve to use loops and freeze mode to their fullest potential.”

That being said, they’ve done a solid job of addressing the learning curve by putting a handy notification center (pictured at right) into the app that will allow users to learn how to use each control and feature of the application. The notification center even reminds you about features you haven’t used yet.

We spoke at length with Native Instruments about some of the features that were missing from this release  – like Remix Decks, full external mixing, etc – and they clarified that there’s plenty in the pipeline that still needs development for future releases:

“With Traktor DJ, our goal was to create a complete solution for DJs of all backgrounds and skill levels, and offer the core feature-set, in the most intuitive, and fun way possible. This is of course a 1.0, so it doesn’t stop here…”

With this in mind, it seems like Traktor is finally filling their gap in mobile development – allowing DJs to play a set on a moments notice with an iPad and prep new tracks on the commute home.  If you’re a heavy-duty Traktor user who owns an iPad already, this might be

Will the other big guns in DJ software development (Serato DJ on iPad, anyone?) respond in kind? We’ll certainly find out soon.


WIN A COPY OF TRAKTOR DJ!

Traktor DJ 2: NI Has Rewritten Their App For iOS, PC, and…