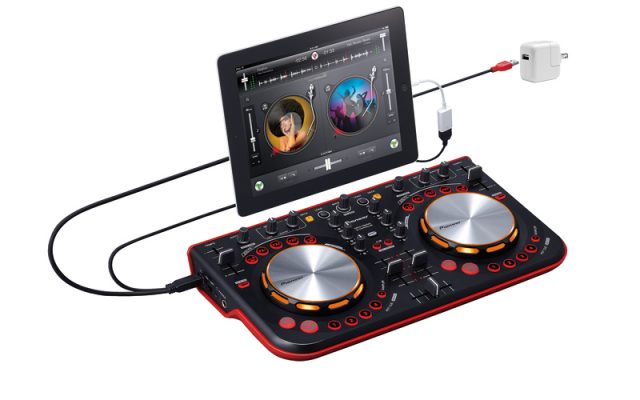 Pioneer is today announcing a new cable that lets users of their controllers finally have a solution for using an iPad as their central hub for DJing. The cable isn’t that complicated, with a USB-B connector on one end and two USB-A connectors on the other. This allows DJs to overcome a common problem with iPad + controller DJing, the lack of a way to continue to charge the device without unplugging the controller (see suggested setup in the image at right – or watch it in the promo video below).

Pioneer’s announcement is coupled with brand new updates to Algoriddim’s djay and vjay iPad apps, which amongst other improvements (see below), makes the DDJ-WeGO and the DDJ-Ergo plug-and-play compatible with both softwares:

Algoriddim have delivered in this new djay update, version 1.6.4. In addition to plug-and-play mappings for the Pioneer controllers mentioned above, they’ve integrated AudioBus support. Audiobus allows live audio routing to other applications for additional effecting and mixing. As always, it’s a free update – learn more and read the full changelog in the iTunes Store.

Here’s hoping we’ll see most of the other major iOS DJ, audio toy, and effects apps follow suit so that all of them will play together!

What All-In-One Pioneer DJ Controller Is Right For You?