Five years down the road from the debut of the Xone:22, Allen & Heath has updated its entry-level mixer to the Xone:23, taking into account some of the most requested user modifications for the 2 + 2-channel DJ mixer. While the overall functionality is largely unchanged, the Xone:23 has some major updates to the internal circuitry, aesthetics and layout. We were on the scene at NAMM 2014 for the full rundown and video.

For this updated 2 + 2-channel mixer, the 2 channels have dual line and phone inputs, so four total inputs with a line and phone pair each routing to one mixer channel. However, rather than a single input level knob with a line/phono switch like on the Xone:22, the Xone:23 has input level knobs for each of the four inputs. So you could have both inputs active on the same channel if you wanted to; otherwise, you can kill one input with a full level cut.

Xone:23 cops the styling of its road-worthy metal chassis and its colors off of the Allen & Heath flagship Xone:DB4. The more symmetrical and orderly layout sees the Mic input with level control and HF/LF EQ moved from the front panel to the top. The 9-segment signal level monitors have been moved to the top-center. Likewise, the headphone cue and level controls have been move up with the rest of the mixing pots. And one of the headphone outs has migrated from the back panel to the front, so that both the 3.5mm and 1/4-inch headphone outs reside on the front panel.

The Cue/Master switch of the Xone:22 was replaced in favor of Cue buttons for each channel, and those buttons, along with the Filter and External FX loop buttons, have been updated with a soft-click feel and colored backlighting.

The Xone:23’s new Alpha up faders offer more resistance, and the user-changeable crossfader with selectable cut and fade curves is compatible with the Mini Innofader. Our A&H demonstrator on the show floor related that all Xone mixers this year will be compatible with Innofader, implying that more Xone mixers are on the way.

Besides the four input faders that allow four stereo sources to route the mix simultaneously, there were a few more non-aesthetic differences between the Xone:22 and Xone:23.

Nothing else has functionally changed on the Xone:23, but there are some worthy features worth reiterating. The VCA channel faders and VCF filter system with high-pass and low-pass filters are based on the same circuitry as the rest of the Xone series, although the Xone:23 doesn’t have the band-pass filter option that the Xone:DB4 has.

An important note about routing on the Xone:23 (and the 22 was similar in this respect): when the 23’s external effects loop is turned on, the effects run through the filter system, so that a channel can have the filter turned out without the effects, but for the effects to be active on a channel, the filter must also be active.

The three-band EQs per channel are total kill EQs when the pots are turned fully to the left.

In addition to the balanced XLR main outputs, there are booth monitor outputs with top-panel level control and record outputs, both on stereo 1/4-inch pairs. 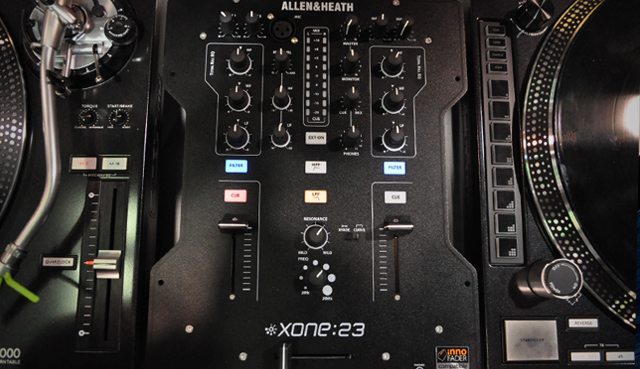 While the Xone:23 may not be an earth-shattering update, it does offer some worthwhile internal enhancements and a very pleasing cosmetic update with some logical ergonomic improvements to the layout and some better feeling controls, such as the full-size filter resonance knob and soft-touch backlit buttons. The largest innovation here is that you essentially get a 4 channel mixer in a 2 channel size with the dual inputs. That and the send return loop, make this a really good value for anyone considering a small home mixer.

We would have liked to see a standard power supply cord on the back, (it uses a custom “lump-in-the-middle” AC adaptor) and a way to separate the effects loop from the filter on each channel. The effects loop lacks dedicated send knobs per channel, so instead the filter buttons route each deck to the external effects – meaning the filter will also be on that channel at the same time.

Allen & Heath quoted us a MAP (minimum advertised price) of $299 and a shipping timeframe of April 2014. That kind of money for an extremely solidly built mixer with the world-renown Allen & Heath club sound and Xone analog filter should piqué a lot of interest.