Almost any DJ has the tools to perform with video, especially with well-developed software like vjay, Serato Video, MixEmergency, and recently Cross all streamlining the process. But not that many take on the challenge of video DJing, and even fewer do it in a unique way, instead sticking to mixing from one music video to the next. DJ Woody, one of the most prolific visual turntablists, made the transition back in 2010. Learn about his switch from DJing to VJing, and read his tips for new visual jockeys in this interview.

DJ Woody had been DJing for most of the 1990s by the time he started getting recognition, entering his first DJ competition in 1999, ending up in the finals of the UK DMC Championship. In 2001 he won the International Turntablist Federation World Championship title, becoming the first European to win. After that he saw more success at the Vestax Extravaganza World DJ Championship, winning world Champion two years in a row.

Woody made a move to audio-visual turntablism in 2010, putting on a tour under the name “Turntables In Technicolor” which incorporated video and his own self-animated visuals (having had a former career as a graphic designer). His show even made an appearance at the US DMC Finals in 2011 – watch below:

What first made you want to include visuals in your DJ sets?

I had seen DJs like Yoda and Mike Relm using the Pioneer DVJs, creatively it really interested me. Coming from the turntablist scene I was more comfortable using traditional turntables, so when the technology became available on Serato it was a natural progression.

I got the beta version of the Serato Video plug-in and went straight to work. I have a background as a graphic designer, previously working for Granada TV, so that helped a lot.

What have you learned since you started the visual sets?

It’s like learning to DJ again in a way as you’re appealing to two senses instead of one. As a DJ you learn to understand what kind of song will appeal to a crowd, in the same way you have to learn what kind of visuals work effectively and instigate a reaction. You also have to understand that not everyone in the crowd is aware of the technology or even interested in the visual aspect of what you’re doing when they are in a club, so the sets must also always work on a purely musical level.

What equipment do you use? What about video files – are you careful about quality?

It’s a really simple set up – just Serato on my laptop with the Rane 62 mixer. The venue supplies the projector and screen.

I bounce the music and audio down to Quicktime files and use those to mix. The audio is MP3 (320kbit/s). When it comes to taking video samples I look at it in the same way as sampling records, whether you’re taking something from an old record or an old VHS sometimes it doesn’t matter if it has a little fuzz or crackle, if it suits the piece then it’s fine.

Could you drop video files in on the fly or would it be too much to think about?

That’s possible, but it depends on the type of set you want to create. Doing a regular DJ set just with standard music videos is fine, but the entire reason I’m so into using visuals is that I want to do something that is interesting, create something new, tell a story perhaps, communicate with a crowd. For the most part, I think that takes a degree of preparation. 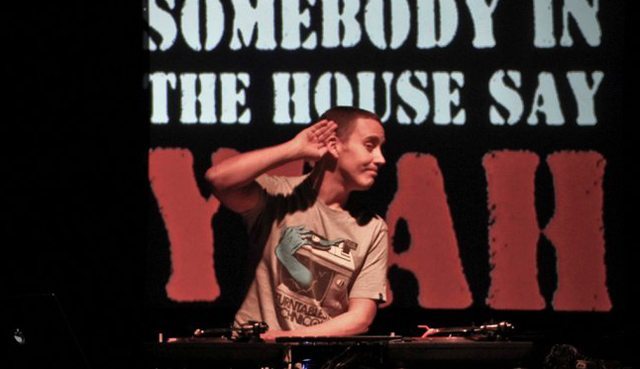 How do you choose material?

It’s dictated by the theme of the show, I always begin with a concept or an idea. For the first show (‘Turntables In Technicolor’) I really wanted to go to town and make it a turntablism showcase that pushed the envelope as far as visual turntablism. I wanted to make every visual mix every bit as interesting as the audio mixes and create something that really looked as good as it sounded.

It was important for me to do something that I hadn’t seen done before, so I chose to make it from 100% bespoke material. Nearly all of that set was designed and animated from scratch using Illustrator, Photoshop, AfterEffects and Premiere.

My last two shows ‘DJ Woody’s Big Phat 90s’ (a nostalgia-fest of 90’s Hip Hop and pop culture) and my current show ‘Hip Hop Is 40’ (trailer embedded above) have been a case of researching, watching and listening to masses of footage, documentaries, films and music videos.

The music selection is always the priority, once that’s done it’s a case of refining and developing the visual ideas.

How long does it take to make a set, and what do you use to put the material together?

The first show took an intense three and a half months, the second about two months and ‘Hip Hop Is 40’ was one really hardcore month. I usually have the main concepts in mind a long time before I start the production process so that I can let ideas marinate.

The editing is done in either AfterEffects, Premiere, or Ableton depending on what I’m doing.

Is there a danger that the visuals might distract from the music, do they add to it?

Well the idea is for the visuals to add to the experience, but what I’ve learnt is that it’s important for the set to always work on a purely audio level. Not everyone on a night out is going to be interested in watching visuals and not every venue is going to enable everyone to see. So I try to make the visuals an added dimension should you want to tap into it.

With your Anne Hathaway remix (above) were you looking for a celebrity rapping or was it inspired when you saw it?

No I wasn’t on the look out for anything. I just saw it that morning and thought “I’ve got to try to do something with that!” It took about 30 minutes to set up the material, one hour playing with it, then I just recorded it. [The video went viral with even the BBC asking Anne Hathaway herself about the impromptu remix.]

How far can the art of VJing go? How about 3D?

3D VJ sets with glasses have been done already. Stuart Warren-Hill (one half of Hexstatic) has done a 3D hologram show – and C2C are doing some great stuff with visual turntablism in their current live show.

I’ve recently been using Serato and Mix Emergency with 3D mapping software as part of a theatre performance – aiding the storytelling by controlling characters and elements of the set via my turntables, so that’s been really interesting. Visual turntablism is still very much a new medium, which is part of the reason I love it – there’s still so much to be explored.

What’s next from DJ Woody?

I’m working on an album which will also be a live project, this will see fruition in 2014. I like to release mixtapes regularly so I have a few collaborations lined up for the year. The theatre piece I mentioned is still in development so there will be more work on that in 2014 but the first project is a new scratch routine video for one of my sponsors so I’m back in the lab working on that soon.

Take Your Scratch Technique Into Orbit