Serato was not the only one to update their software this week. Native Instruments quietly rolled out the latest update to the Traktor DJ app which appears to be a major improvement over the previous version. Read more inside about how NI incorporated Audiobus, external file management, and a lot more into the Traktor DJ 1.6 update.

The Traktor DJ app came on to the market with potential and good intentions. However, many users wished there was another way to route audio to and from the Traktor DJ app to get more out of all the app has to offer. NI has released the update that not only includes Audiobus capabilities but Traktor DJ can also stream audio output to other apps.

Audiobus, if you don’t know already, is a powerful iOS tool that allows apps to stream audio into other apps capable of receiving a single. Think of it as a send and return function on a mixer. What this means for Traktor DJ is that now one can take the audio coming from a mix and send it directly too apps like Garageband and Effectrix thus adding more opportunity for music production.

Also, the 1.6 update includes the capability of streaming to other apps allowing for recordings outside of Traktor. 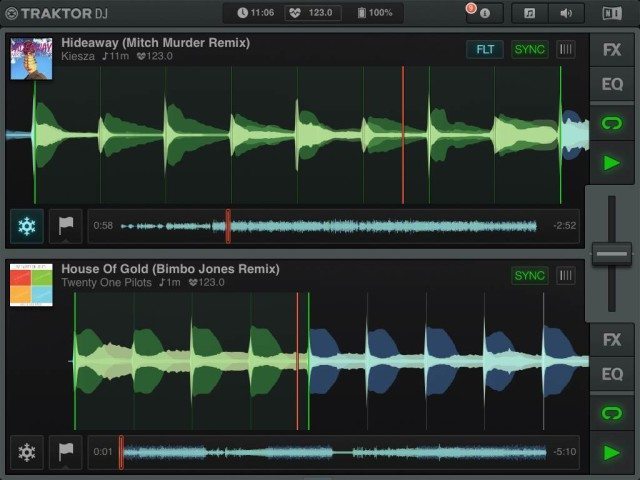 On top of the added functionality in update 1.6, NI has implemented a better system for EQing, searching for tracks, and having tracks ready to play. The EQ and volume can now be reset very easily by double tapping the icons in the app. Along with accessibility, the EQ and volume now feature relative slider control.

Searching tracks is now easier than once before with improved algorithms to find tracks based on simple search terms. I am glad that NI is nailing this now but it seems as if there is a trend of software previously having misguided searches in the early stages. The good news is that it is reportedly fixed in the 1.6 update. The last major improvement to the app is the new function of the HotCue drawer. Now, instead of opening the drawer again and again, one can just keep it open allowing for quicker track loading. This is extremely useful especially when a DJ needs a track on the fly.