There is a significant part of the DJ world in which vinyl will never die. From turntablists, to reggae jocks spinning 45s, and techno DJs like Sven Väth, the lure of black plastic is inescapable for many. So here we find ourselves, in 2014, with Pioneer, a company long associated with pushing the digital revolution, releasing a traditional analogue turntable. But is it a suitable replacement for the venerable Technics SL-1200? We tested one to find out. 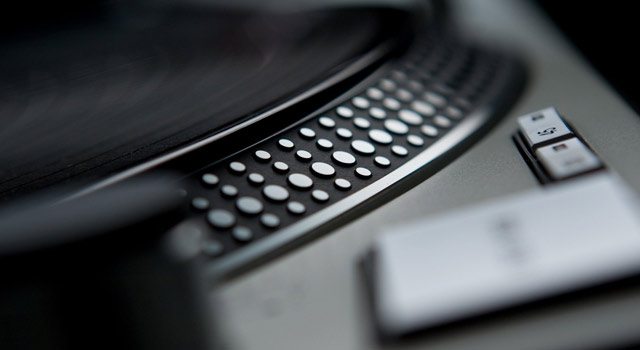 A simple potted history of DJ turntables, ‘post-1200’, goes like this – once the Technics 1200, designed as a hi-fi deck, was adopted wholesale by DJs worldwide, companies scrambled to produce alternatives. Manufacturers like Gemini made 1200 clones, which were often cheaper, but lacking the patented motor design of the Technics, always fell short on performance.

Then Vestax came along with their own takes on the DJ turntable, innovating all over the place. Sometimes the technology didn’t quite match their ambitions, but they pushed the limit of what was possible with an analogue deck.

As vinyl began to wane as a mainstream format, Chinese company Hanpin produced the ‘Super OEM’ turntable, the most well-known model of which is the Stanton STR8-150, but which has been adapted and re-badged by numerous companies. What the Super OEM had in it’s favour, besides good build quality, was that it was the first deck to take advantage of the expiration of the Technics motor patent. So, finally, there was a Technics ‘clone’ on the market with truly similar performance.

The beauty of the Hanpin design is that, working from a solid base with that motor, manufacturers are free to then innovate around that. So bell & whistle features like line-level output, reverse play, pitch correction, and digital pitch readouts have all appeared on Super OEM decks, reaching a zenith with the Reloop RP-8000 and it’s built in midi controls

Whilst the PLX-1000 clearly shares some DNA with the Super OEM decks (a quick look at the motor confirms that), Pioneer have gone very much in the other direction when it comes to features. 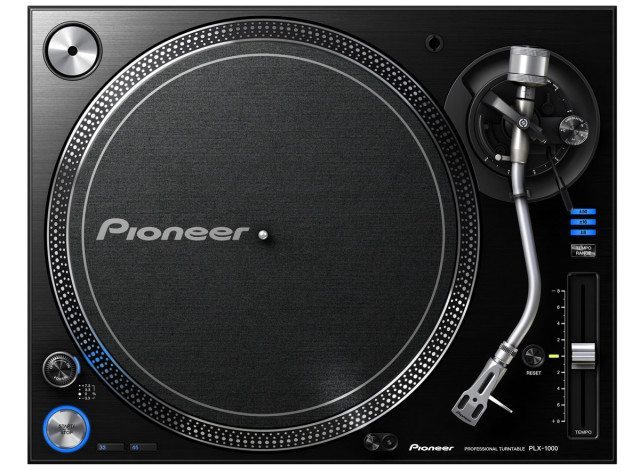 Like the Technics 1200 series, the signal path on the  is pure analogue. With no line level pre-amp built-in, the audio signal is fed directly from the contacts in the tonearm through to the RCA jacks under the body – just like a 1200. There’s even a ground wire. This is all very ‘traditional’ stuff, and makes for great sound with real vinyl, and the right cartridge mounted.

It’s good to see the sockets recessed so far into the body, as that means you shouldn’t need right-angle plugs to comfortably use the decks in battle style against a mixer, although the pay-off there is that it’s quite fiddly to access them if you change your setup often.

Motor performance is excellent, as expected, with higher torque than a 1200, but nothing that will take your fingertips off when dragging along the platter edge. The startup time is very quick, and there’s no adjustable start/stop time, but the deck is preset to perform much like a 1200 in that area. There will forever be debate around wow & flutter, and other such things, amongst hardcore audio-heads, but for DJing, the motor does an absolutely great job. The Super OEM motor has proven itself for over a decade now, and with the Stanton I own being one of the earliest models manufactured, I can attest to it’s durability.

You can select between +/- 8, 16 or 50% pitch ranges, and at the 8% range the pitch feels very accurate – not precisely like the 1200 mk2, but much like the pitch on the Technics M5G. Easy enough to adapt to, if you are used to 1200s. There’s no click at zero, so no weirdness around that area, and there is a pitch reset button if you need it.

The second start/stop button found on many current decks is not present. I sometimes find myself activating that by mistake on my Stanton when using it battle-style, so no great loss for me, but some turntablists may miss that. It does mean there’s a hole for a 45 adaptor, which can also be used for Novation Dicers without any modding, a real bonus for some DVS users.

The tonearm is excellent, in terms of both usability and isolation. The geometry appears to be almost identical to that of a 1200, and the extra isolating material inside the arm, combined with the large amount of isolation in the base, made for pleasing results when tested in a club booth. Not remarkably better than a 1200 in the same booth, but then the 1200 was always pretty astonishing in that regard anyway, despite it’s hifi roots.

Attack of the Clones

There’s no escaping it; Pioneer have clearly looked at the now discontinued Technics 1200, and said “let’s make one of those”. So much of the PLX is designed with the 1200 in mind – unlike many Super OEM style decks, the platter is sunk into the body like a 1200, and the tonearm base looks almost identical too. Even the target light is a pop-up job, rather than a removable one (that was always an issue on the 1200s, as the bulb would be a pain to replace, but the LED in here should last a long time).

Fundamentally, that similarity is a good thing. The SL1200 is dead and buried, and it’s not coming back. Sure, they last for eons, and can be repaired by countless technicians around the globe, but if you want a brand new turntable, you’ll be very hard pushed to find a pair of box-fresh 1200s at this point (and you’ll pay a fortune for them).

So who is this deck for? It feels like these are really aimed at venue owners/installers, who aren’t wanting to buy second-hand kit for their systems. They get the confidence of knowing that they’ve got a warranty, and after-sales support from a brand they know and trust. And with the PLX, they can feel confident that any vinyl-using DJ who crosses their path will have no problems using them.

As for regular DJs, should you buy the PLX? If you already have a pair of Technics (or Super OEMs) that you are happy with, then no, you shouldn’t. It’s not like you’ll practice at home on those, then play at a club with PLXs and get thrown off your game. You’ll be just fine. And there are really no features (save for the expanded pitch range options) which will make any difference to your sets.

If you don’t own a pair of turntables, though, or are wanting to buy a brand new set, with warranty and so-on (like club installers), then the 1000s are definitely a safe purchase. They aren’t the cheapest around, with a street price of around $700 per deck (because, Pioneer), but the build quality and performance are excellent.

Some people will be looking for more features and innovations from their turntables, but with the PLX-1000, you can be absolutely assured of a very ‘1200-like’ experience, which is, fundamentally, all that a lot of DJs want from a turntable. If that’s you (and you can afford them), then the PLX-1000 will serve your needs very nicely.