Dedicated fans have carefully been watching for every chance to see the new Richie Hawtin / Andy Rigby-Jones mixer collaboration, but finally the 100% analog PLAYdifferently Model 1 mixer has been publicly announced. Watch DJ Techtools’ world-exclusive explanation and demo video with Richie himself after the jump, as well as a Boiler Room live stream today.

Welcome to a mixer design that’s significantly different from almost every DJ mixer out there. From a quick glance, most DJs would notice a few obvious unique things: no crossfader, instead there’s six faders with studio-style caps, and there’s a few more knobs on each channel than just a simple gain/EQ.

This is a fully analog mixer, built in the UK, and it has an impressive feature set. Here’s an overview of the most notable: 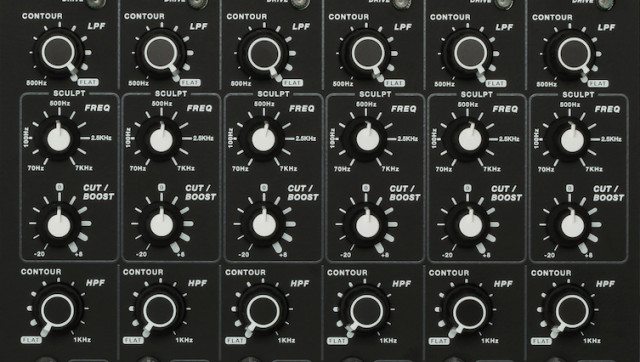 Similar to the feature set, there are some major industry firsts on the PLAYdifferently Model 1, including:

The technical details on this mixer are incredibly detailed, and with a design and prototyping process of over two years, it’s no wonder. The full user guide with complete technical specs will be available on the official PLAYdifferently website here.

The mixer has retained a lot of the design language and interface styles that are present on Allen & Heath mixers because it’s co-designed by the Xone series mastermind, Andy Rigby-Jones, and ultimately the mixer will be manufactured by Allen & Heath, only with PLAYdifferently branding.

Release Date: At time of press, it’s still unclear when the mixer will be available to the public but we’ll update this article when those details become available.

As if our video and the specs detailed above weren’t enough of an opportunity to nerd out on the new PLAYdifferently Model 1 mixer, there’s a Boiler Room with Richie scheduled for today (Tuesday, May 3rd) at 20:00 CEST (that’s 11:00AM PST, 3:00PM EST).