How I DJ in VR: Grimecraft Interview

In today’s video, we talk to Grimecraft, one of the first DJs to enter the alternate sphere of DJing virtual reality. The DJ system he uses, “TheWave”, was first covered in a previous article here on DJ TechTools. In this piece, we look at what it’s actually like to DJ in VR with TheWave, using the HTC Vive, and pose the question: “Will we all become virtual reality DJs?”

How I Play In VR: Grimecraft Interview

Grimecraft is playing in a custom virtual reality program called TheWave (currently unreleased, in development) – the DJ side of which is running two deck playback and effects in a world that can be experienced by an audience of people at the same time as the DJ is performing.

Fans who want to watch a VR set don’t have to have a full-scale VR setup, and could theoretically watch their favorite DJs using Google Cardboard, Samsung Gear or other more affordable solutions in the future.

The DJ side of TheWave is controlled using HTC’s Vive setup, which is a full-scale room kit that allows you to move around a space roughly the size of a small bedroom. Along with basic movement, the DJ can use a set of hand controllers to grab and load new tracks, change the visuals, and apply effects. Currently on backorder, the Vive system runs around $799 and requires a fairly hefty gaming PC to run properly.

How Do You DJ in VR? 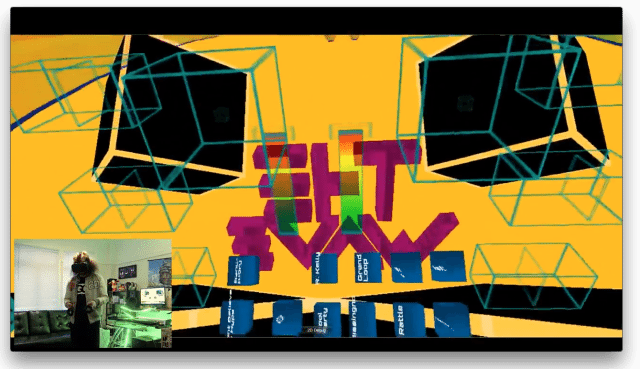 The DJ software is an early prototype hardcoded in Unity (a 3D graphics gaming engine), and is still lacking a few features that modern DJ software has, but handles the basics of two-deck mixing pretty well. In the image above, Grimecraft selects songs (represented by cubes) which can be moved around the room or placed in a deck for playback. We love the natural grouping of songs as objects in the room, which would be extra handy for set prep.

What About The Crowd?

Grimecraft can see the participants watching him represented by avatars that move around as the real people bob their heads to the beat. He’s excited about the possibilities of mixing real life club events and virtual reality at the same time.

“You can have venues of people using VR and having the silent disco experience as well as people from the internet joining in. You will be in a virtual crowd and not know who is actually there”

Wondering where to catch Grimecraft’s next VR set? Well you can’t – yet. TheWave is not released to the public and the event you saw in this video is from a private party at the Game Developer’s Conference in San Francisco last month. However, with HTC Vive now shipping and Playstation VR on the way, will it be just a matter of time before we are all DJing in VR? Tell us your opinion in this survey:

Editor’s Note: TheWave has continued to develop since we shot this video a month ago – with increased advancements to the in-world graphical experience and a music creation mode – see the latest graphics for the DJ side in the below video:

Is virtual reality the future of DJing?