The 2016 Online DJ Champion will be chosen by DMC judges on June 16th, but while they deliberate, the world can view the top 12 finalists’ videos for themselves. This contest is the ultimate competition for bedroom DJs to show off their skills from the comfort of their own home studios. Check out some of the highlights of the finalists inside.

Unlike performing in front of a crowd in a venue, in the DMC Online  online DJ can record multiple takes of a routine until submitting the best take. This means there’s a lot of room for creativity and ingenuity when creating a routine.

After viewing the finalists we found the most intriguing routine to be DJ Brace’s routine, which included a MIDI Note Fader (a production version of the classic Fretless Fader concept) in a Vestax PMC 06 VCA mixer.

Upon viewing the finalist videos for the competition, you quickly get used the typical DMC routine. The intros are often vocal samples that boast the DJs prowess, followed by a command for all other DJs to step down. Then, the routine is five minutes of various techniques, the majority focused around (skillful) beat juggling, scratching, and clever finger-pointing and knowing glances to the camera. DJ Brace’s routine starts out just like the rest, however, he begins to introduce tone play with his Vestax PDX-3000 shortly after playing a vocal sample that condemns cookie cutter routines.

The most interesting parts of Brace’s routine coming in when he introduces his Vestax 06 Pro MIDI Note / Fretless Fader on a guitar sample, allowing him to manipulate the sound in a highly organic way.

Bonus points in his routine go to the use of foot pedals. Since his hands were so busy with the mix, he adds in various foot pedals. One to turn on the left turntable, another to add delay, and another to add a wah effect of the guitar sample using his Ibanez Tone-Lok WD7 Weeping Demon. The use of effect pedals in DJing is seldom, but Brace shows the world how effect pedals can take a routine to a whole different level.

Brace’s routine stands tall against the rest of the competition and picks up the slack in terms of creativity. But, why?

Is There a Lack of Creativity?

There is a formula to the DMC battles focused around using samples to call out the competition and varying scratch/juggle techniques into a six-minute routine. On one hand, this is the heart of any DMC battle which is centered around the concepts of turntablism. Yet, why is it that I started to get bored watching the final routines for this year’s competition? There is no denying that having the skills to scratch and beat juggle in time is something that should be respected, but when all the top DJs are capable of cutting in a 32-note pattern, there is little to be surprised by when watching the routines.

Thankfully, technology has allowed DJing to progress far beyond the limitations of two turntables and a mixer. Whereas before it was legendary to see a tight, 32 note pattern, today it is far too common. Technology allows a DJ to innovate beyond the status quo for routines by adding new effects, rhythm, and harmonies to the mix. For some DJs, that is playing two chords on a piano during the intro of minimal Eye of the Tiger sample, for others that’s using tone and pitch to create harmony between tracks, like Brace has done. 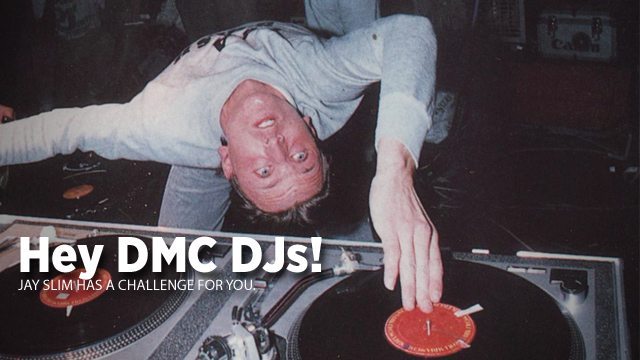 Four years ago, DJ Jay Slim wrote an open letter to DMC competitors, challenging them to switch up the game by being more creative with their routines. Not much has seemed to advance in four years – DMC competitors have all copied the same formula and turned into the DJ’s equivalent of an MC battle. The same rhythm is being put into each set and the winner is whoever is wittiest when it comes to chopping up samples.

The problem is not with the way the DMC competitors play. The problem lies within the fact that most routines are cut from the same cloth. As Jay Slim said four years ago, there is a lot of room for DJs to improve their routines by developing new rhythms, arrangements, samples, etc.

In fairness, there were a few routines in the DMC Online Finals that had elements worth noting – keep reading for highlights:

DJ As-One’s routine is one of the tightest to be seen this year. There is a natural progression to his routine and with of interesting techniques to keep it fresh, from pitching loops to changes in rhythm, followed by unique uses of silence in between.

DJ Spell keeps his funky routine interesting with well-executed cue plays dropped to create a different sense of rhythm. The track selection and the way DJ Spell cuts the records is what gives his routine a strong personality, which arguably is just as important as skill.

Speaking of personality, DJ Buruaaaa’s routine is full of it – easily one of the craziest ideas executed. His juggling and scratching skills are put to the test against high-tempo happy hardcore, one of the last genres I would have guessed to hear in a DMC routine. The routine isn’t as tight as many of the others, and there’s some frequency clashing going on, but props to DJ Buruaaaa for being unique and trying something crazy.

Check out the finalist for the 2016 Online DJ Competition.
Let us know who you think deserves the championship belt!