In their usual fashion, Pioneer DJ has sent out a late night email for a surprise announcement of a new product, this time the DDJ-RZX. This new bit of DJ gear is designed specifically to work alongside a new Rekrodbox DJ video pack that allows mixing video in the DJ software – read on for details.

The DDJ-RZX looks (and behaves) a lot like someone took the Numark Dashboard and permanently installed it to a DDJ-RZ. It offers three 7-inch touch screens, each of which allow you to: 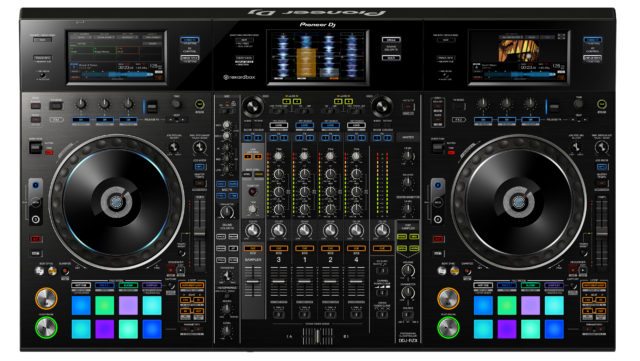 Also worth noting is that Pioneer has added a few new effects controls that you can take advantage on on the controller:

The DDJ-RZX includes license for Rekordbox DJ, Video, and DVS, and is estimated to be in stores sometime in July with a retail price of$ 2,999.

The new Rekordbox DJ Plus Pack adds the ability to mix videos to the software – taking solid aim at Serato and Virtual DJ. The feature set includes (directly from their press release):

To take advantage of this new Video Plus Pack, you can buy a license for $149 – or get access instantly if you have a subscription license to the software.

Will This Turn Into An XDJ-RZ Standalone Unit?

Upon first glance, we thought that this product announcement would be a much-needed successor to the all-in-one standalone XDJ-RX, this time in a four deck version. Unfortunately, it’s not, but considering Pioneer DJ’s penchant for reusing similar designs in their lineup we wouldn’t be surprised. Alternately, this is just begging for someone to install a Mac Mini inside the case (if there’s room) and run it as a standalone unit…. anyone up for the challenge?

Is rekordbox 6 on the way? First signs of a “new service system” from…