There’s been a buzz in the international DJ community as the winner of a major Thre3style event was discovered to have faked his set. For all the production that goes into Red Bull’s DJ competition, we’re amazed that a few basic concepts haven’t been implemented that would instantly allow judges, fans, and fellow competitors to detect fake DJ routines.

G-Smooth’s Set: A Lot Of Work To Fake It

Before we dive into our two suggestions for DJ competitions, a bit more context on this week’s events. G-Smooth was declared the winner of the Australian Thre3style competition that took place on July 1st. However, many DJs around the web watched the routine and were able to quickly find moments where his physical actions on the turntables and mixer didn’t line up with the resulting audio. Add to that,  the trim/gain knobs on each channel were turned all the way down, and the sampler volume was turned up, as pointed out in the screen capture from Eric Lehy above.

You can watch the full routine on his Facebook page, but considering the context, we felt it more appropriate to just embed two clips of the most egregiously faked parts.

Fake Roll: G-Smooth Faked Red Bull Thre3style entryG-Smooth had his winning Australian Red Bull Thre3style title revoked after DJs called fake on his performance. Here’s a clip of him using loop rolls during the routine in question. Read more about how competitions could fix this problem here: http://djtech.tools/fakeDJset

Watch The Label – G-Smooth Red Bull Thre3style clipG-Smooth had his winning Australian Red Bull Thre3style title revoked after DJs called fake on his performance. Here’s a clip of him “cutting” in the routine in question. Read more about how competitions could fix this problem here: http://djtech.tools/fakeDJset

It’s worth noting that G-Smooth mimics a lot of the performance very convincingly – enough to fool the judges in the room and the crowd. But imagine how much work it must have taken to make sure that his actions aligned with a playing track?

With live DJ routines, slight flubs or moments where it’s not quite right are acceptable, because they’re live. But if your recorded set is perfect, then you have to match your actions exactly right to that perfect recording. He might as well have just played the real routine with all the work he put into faking it.

To allow anyone to quickly see if the audio matches up to what a DJ is doing during a performance, there are two things that need to be recorded without interruption:

1. Overhead view: Video cameras are all over the DJ booths at these Red Bull Thre3style events, but for some unknown reason, there’s not one that is directly above the DJ mixer pointing down. This angle allows you to see the VU meters, every single control on a DJ mixer, the exact sticker location, if cables are really plugged in, if gear is turned on, etc.

The Red Bull Thre3style producers want the final published videos to look really good in terms of editing and camera work, and a single overhead feed isn’t too exciting to watch. But look at how the popular DJsounds YouTube mix show does it for inspiration (mixing starts at 7:30):

2. Screen Capture: Being able to see exactly what is on the screen of a laptop DJ might feel invasive, but it’s completely necessary to see what is really going on. For instance, in G-Smooth’s performance, the decks on Serato DJ were still moving and he was manipulating them live. But the real audio is coming through the SP-6 sampler in the software – something we might have been able to see activated in start of the routine.

A lot of DJs also use pre-produced edits when entering competitions. The best way to properly show the audience the different between these edits and an on-the-fly edit is to have a window into the software to see what’s one the decks. Just take a HDMI cable, plug it into the computer, set it to mirrored so the DJ’s view is unaffected, and record the output. 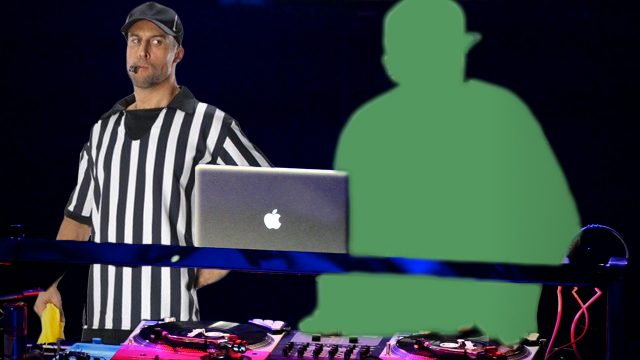 In most professional sports, you don’t have referees that sit in the stands and officiate from there. So why is it that in almost every professional DJ competition, all the judges sit in the crowd or across the room? Unless there are monitors at the judges’ table showing the screen capture and above-the-mixer video angle mentioned above, the judges will be unable to really determine what’s going on and how the routine is being performed.

The simple solution is to add either a judge or an impartial referee who stands next to the DJ. They’re not there to trainspot, but to instead watch what a DJ is doing technically.

How would you change the DMC and Thre3style events to prevent fake DJ routines?

dj competitionsfakefake djingg-smoothRed Bull Thre3style
Share
Comments
Get DJTT love in your inbox
Drop your email address here, we'll send you news, tutorials, and special offers once a week.
Unsubscribe at any time. we won't sell your data, ever.