Record pools are a boon for working DJs, and in recent years, digital services have stepped up their game. Today, DJTT’s record pool expert Nick James takes a closer look at BPM Supreme. Their service has gone through major updates recently that make it even better. It’s also one of the only record pools with audio and video files for download. Read on for a comprehensive review.

Want to enter the contest for a free month on BPM Supreme? Jump to the giveaway with this link.

It’s been a few years since we last checked in with BPM Supreme in our roundup – Top Online Record Pools For DJs (Part II). Their site has gone through some major updates since then. Instead of comparing the old to the new, we’re going in-depth and touch on some of the new features they’ve added.

Most digital record pools offer unlimited downloads of high quality MP3s for a set monthly price. These pools are both a market research and promotional tool for record labels, so they often have rules requiring the members to be working DJs (clubs, radios, etc) so that they get a return for their music in the form of play time in front of a wide audience.

For DJs that need to constantly add new music to their libraries, record pools can help reduce their costs. It’s the same price every month, regardless of the number of tracks downloaded. Download more music in a month and the price-per-track average goes down.

I’ve said it before – the most important consideration when selecting a record pool is whether the library has the music that you as a DJ need. Before cost, website features, and the value-added fluff: make sure the pool has music that you will actually play.

BPM Supreme has an impressive library of mainstream genres that should cover just about any club, bar, or radio station DJ. They also have an extensive library of music videos for you VDJs out there. Their audio genre selection includes: Exclusives, Hip-Hop, EDM, Latin/Urban, Pop/Top 40, Electronic Dance Remixes, Remixes, Dubstep/Trap/Twerk, Tropical, Regional, Country, Rock, Reggae/Dancehall, Holiday, 80’s, 90’s, and 00’s.

The video selection is limited to: Country, Electronic Dance, Hip-Hop and R&B, Pop and Top 40, Rock, and Video Remixes.

Using the same test we used for our last review in the audio section of BPM Supreme:

These results are in line with exactly what you’d expect and want to see from a mainstream and commercial record pool; Great coverage of the Top 40/Hip-Hop/Country type tracks, a good selection of mainstream House and Electro House for the club and EDM DJs, and less overall emphasis on more underground or niche tracks.

Their newest redesign of the site is grey with white and red accents. It feels more modern, minimal, and overall is a cleaner experience.

Navigation of BPM Supreme is a breeze –  four persistent buttons to take you to:

Quickly jump to a genre of choice, apply refinements to the results, and access the current top 10. While browsing, the main header and footer never change, allowing easy access to the preview player, your crate/download queue, and site-wide search.

Track listings are fairly self-explanatory – title, artist, available edits (clean, dirty, etc,) genre, date added to the site, and BPM. Each track has a view link that expands down to show you the individual versions, an indicator for your  downloads (only three allowed per file), and download / batch queue buttons.

One thing I would like to see in their navigation is breadcrumbs. While browsing the charts or new releases it would be nice to click artist/remixer names to find more of their music instead of having to copy and paste to the search box. Lack of breadcrumbs isn’t a deal breaker, but it’s a feature that can be a big quality of life/record digging improvement.

BPM Supreme’s preview player is a rare breed – it allows you to preview the entire track from start to finish and skip around at will. The quality of the previews is reduced to save bandwidth and increase load speed, but thankfully its high enough to preserve the punchiness of the bass lines and the nuances of the melodies.

Their player also has a drop down to show alternate versions of the playing song, along with buttons to download directly if you’ve navigated away from the track already (the preview player is persistent on every page).

Considering the bandwidth requirements for streaming video, limiting the quality of the previews is not surprising. These previews are just to make sure it’s the right video and check out the song before downloading the HD file. The video preview player also loads almost as quickly as the audio preview player, so it’s a fine trade-off.

BPM Supreme has a search top-level search that searches every text metadata field – artist, title, remixer, etc. In the search results, there’s a selector to toggle between audio and video, and search refinements along the right-hand side of the page. The refinements let you show only specific edit types, limit the BPM range of the result, and change the way the results are sorted:

I accomplished essentially the same thing by using the search refinements to only show “remixes” under the edit type and limiting the BPM range, but a few results that didn’t meet my criteria still snuck in to the results. It would be nice if you could restrict the search results by genre.

BPM Supreme’s site is snappy and responsive, but there can be a wait of 3-4 seconds for the track list to load when clicking the next page or when searching. Overall the speed is acceptable, but navigation isn’t instant, and you will see a loading ring once in a while during browsing. (Editor’s note: the newest version of their site seems to have sped up significantly from when this review was first written)

The momentary delay for loading page content gets a complete pass because their preview player loads instantly. You can click play on a preview and scrub to the middle of the track right away with no lag whatsoever. Many working DJs just have time to skim – hit preview, scrub to 33%, scrub to 66%, and then scrub to the last couple seconds. This preview player is perfect for this – I was able to quickly preview the five latest EDM tracks in under 30 seconds with no lag between tracks or while scrubbing. 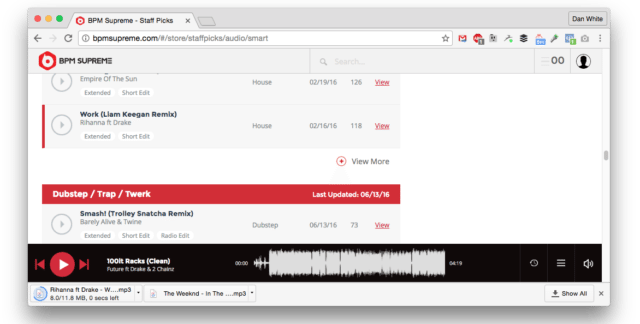 Download speed for tracks is quick, but it’s hard to tell exactly what the upper limit is. On single track downloads my speeds got up to roughly 11.2 Mbit/s but it’s difficult to tell if it would have gotten any higher because as they hit that speed they were generally done. Downloading a zip file of multiple tracks got up to 29.6 Mbit/s, but was also finished too quickly to tell what the sustained speed would be. At these speeds, it’s almost irrelevant.

Download speed naturally is affected by concurrent downloads to some extent. Downloading three videos concurrently, the first one went faster than the next two until it finished, and then one was faster than the other. The three videos with a total size of 214 MB combined still finished in under 2 minutes total.

As mentioned, BPM Supreme includes music videos at no additional cost. There are over 33,100 in their library at the time of writing. The videos generally come with similar edits as the audio including clean edits, intro edits, and quick hits.

If you’re a video DJ or are thinking about adding video to your offerings this feature alone might make BPM Supreme worth checking out for you.

BPM Supreme lets you add tracks to a queue to batch download later. Once you’re ready to download your queue, the site packs all the tracks you’ve added into a single zip.

Zip compression doesn’t have much of an effect on audio or video sizes (~5%) but the single file does cut down on concurrent downloads. This queue can also act as a “maybe” or “download it later” list.

BPM Supreme’s premium membership includes all the features of their standard membership but also includes two monthly deliveries of physical DVDs pre-picked with 8.55 GB of audio and video on each disc. The music and videos on the DVDs are organized into folders and tagged – drag and drop them straight into a file directory or DJ software of choice.

While they call the DVDs “back-up DVDs”, it’s more in line with the way record pools used to work, before the mass adoption of MP3s. A team hand picks the best from their recent releases, and it is sent directly to you. This might make a lot of sense for DJs with really poor connection speeds or CDJ users who might want a backup music library on discs.

We reached out to BPM Supreme for this article, and they’ve agreed to give out 10 free one month memberships to their record pool.  Enter with the widget below:

BPM Supreme is a great pool for DJs that need mainstream and open format music, for mobile DJs, and especially for anyone playing music videos. At only $19.99 per month for unlimited downloads, it’s hard to beat the value. Their website is easy to use, files download quickly and are of performance quality, and save for a few quality of life improvements they could make there’s not much to complain about.

If you’re curious about the content you can preview some of their newest releases here without a membership.
The service is not as ideal for some that might want to find more underground or niche tracks, but for everyone else it’s certainly worth checking out.