Liine, makers of the popular Lemur iOS app, recently released an update to their Skram app that greatly enhances it’s functionality and adds new ways to share your creations outside of the iOS platform. Best of all, for a limited time it’s free – read Tarekith’s review inside.

For those not familiar with Skram, it’s an iPad-only app designed around a sort of groovebox concept. 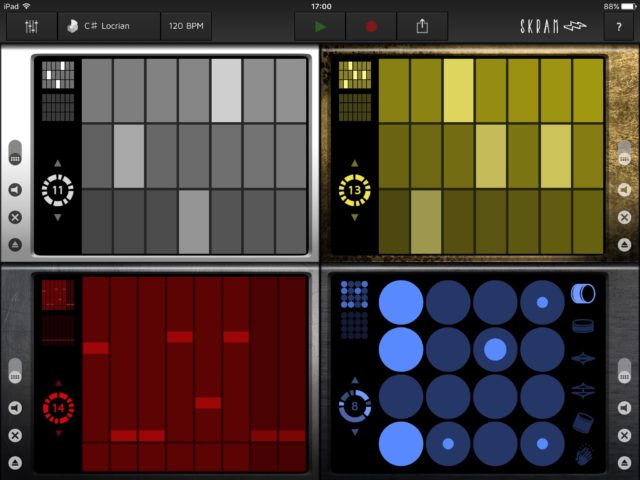 The Drum Sequencer for the drum machines comes with 8 pre-programmed patterns you can switch between on the fly, or to use as a starting place for your own beats.

You can of course start with a blank slate and make your own patterns too, so you’re not stuck with the factory defaults. The drum sequencer is also the only sequencer that lets you change the velocity of each step, which is done by dragging up and down on the 16 sequencer steps to make them louder or quieter. 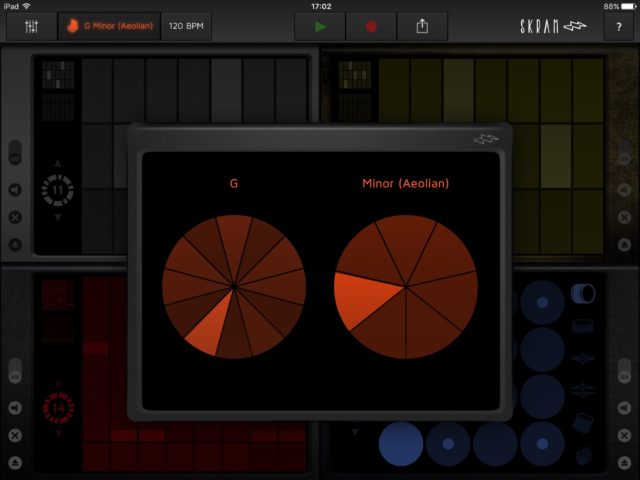 The Pitch Sequencer gives you 8 steps, each of which you can change the pitch of according to the global scale setting. The scale settings let you choose the root note, as well as one of 7 scale types, and these can be changed on the fly after the fact to allow key changes in your songs. Liine have even helpfully made complimentary keys to your current one brighter on the selection wheel, making it easier to make sure these changes don’t clash harmonically (unless you want them to).

The Pitch Sequencer can also be shorter than 8 steps if you want, allowing for some polyrhythmic action if that’s you’re thing.

The Arpeggiator is another sequencer that lets you specify notes from the current scale, and then plays them back in the order they were selected. Both the Arpeggiator and Pitch Sequencer come with 16 different rhythmic variations to choose from, so you’re not stuck with repetitive 1/16th notes for the sequence.

Like most things in Skram, you can change the rhythm variations on the fly for more variety in your sequences. 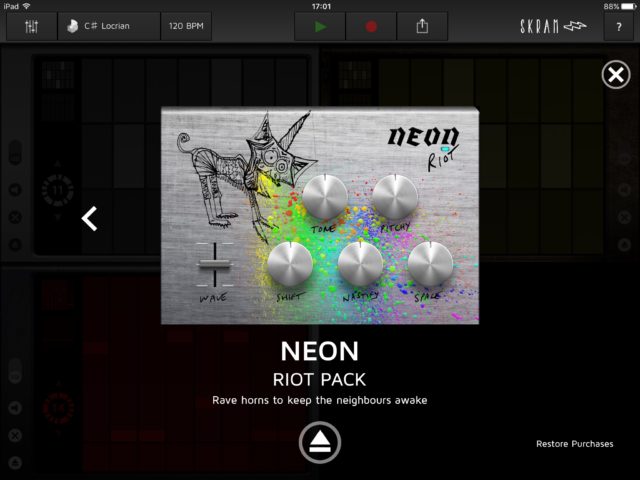 When it comes to the sound generators (these are devices in Skram speak) you have 4 built-in Devices to chose from with the base pack. The new and free “Riot” pack adds an extra 4 Devices. These are:

Mix and match up to 4 of any of the Devices, even using 4 of the same Device if you want. All the Devices have between 4 and 6 knobs to tweak, allowing you to further shape the sound to your own liking. Helpfully, when you start tweaking a knob, a vertical line appears next to your finger allowing you to see in finer resolution the knob’s parameter values. 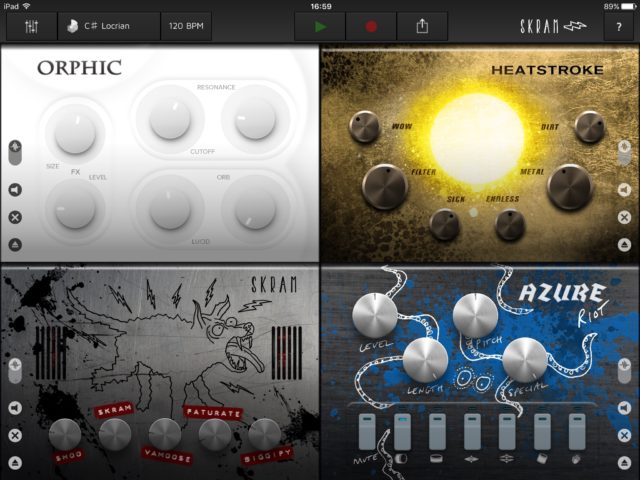 Users of Propellerhead’s Thor synth will be familiar with this concept, and it definitely makes more precise movements easier.

On each Device it takes only a button press to mute the Device, or you can use the global mixer view to change the volume balance between the Devices. Another button let’s you flip between each Device’s controls or sequencer, or choose another Device from the list of 8. Clear a Device’s sequence with one button press as well, though personally I find this is too close to the mute button, and accidentally deleted a sequence on accident a few times. There’s no undo as well. 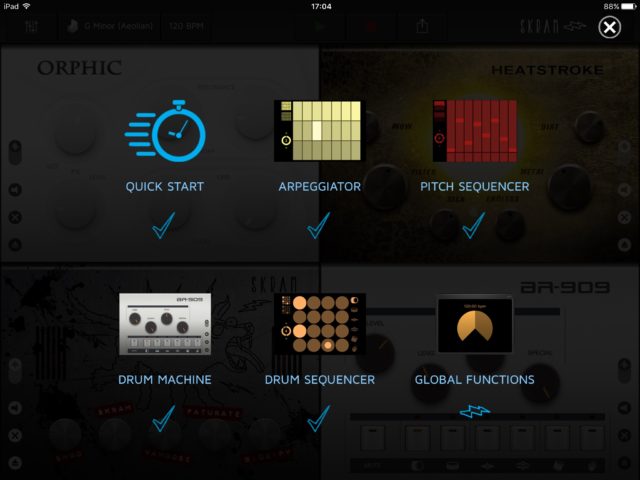 Aside from the global scale and volume mixer, there are also controls to change the tempo of your project, enable Ableton’s Link for syncing, record and export your performances, and a useful help button that leads you to a concise tutorial showing you how everything works. Recorded performances can be shared via email, Audio Copy, or Airdrop. You can also connect Skram with other apps like Auria or Cubasis via Inter-app Audio, though sadly there is no Audiobus support for those that prefer that.

The sounds you can get from Skram are very well done, and all the Device controls seem tailored so that they give you just enough range to make the synth sounds unique to you. The Device graphics are interesting, with a guitar pedal vibe.

The 1 bar sequences bight be a bit short for some people, but it keeps things focused and performance-based. This is an app you interact with instead of programming in advance and then sitting back (like you might with a DAW).

Skram fits into a middle ground of apps. More capable than Propellerhead’s Figure, but not quite as involved as Korg’s Gadget. With the new (currently) free IAP, there’s a huge range of great sounds to choose from.

There’s something here for all kinds of musicians looking for a portable sketch pad for the music making. I’m sure more Device packs are on the way via IAPs, so the palette of sounds will only grow in time. And hey, it’s free if you act fast, so what’s to lose?

14 Apps For Live Producing and Performing on iOS