Recording and distributing a DJ mix might be easier than ever, but when you’re sharing your mix online, how do you reach people? In an era of video-focused content, audio-only DJ mixes are becoming more difficult to easily share on social media. Keep reading for an overview of the state of DJ mix sharing and how you can stand out.

In the last few years, we’ve seen Facebook’s increased desire to become the place that media is hosted instead of simply shared. This has reflected itself in users’ timelines – with Facebook Live and videos uploaded directly to the site getting the ability to play right in the timeline.

DJs who have used audio-hosting web tools like Soundcloud or Mixcloud might remember that pasting in a link to your mix would put an audio player directly into the feed, making it way more likely that a friend or fan would start to listen to your mix.

But those days are gone. Pasting in a link to your mixes on these sites no longer generate a built-in player. There was no official announcement, and it’s not exactly clear who is “to blame”. Here are the facts:

“In response to recent sharing issues on Facebook, we have implemented a change where links shared to Facebook will not render into players, but will rather let users click straight through to your track’s page on SoundCloud to play there. This way, we can provide a much better experience for your listeners” – excerpt from a Soundcloud support page on Facebook sharing

Based on a bit of casual testing on Facebook, only a few major media providers seem able to still play media directly in the timeline:

For Spotify and Apple Music, DJ mixes aren’t supported (more on that at the end of this article) – but what about Facebook video, YouTube, and Vimeo? There are a few options:

Uploading Your DJ Mixes As Videos

So in an era where audio-only mixes are mostly useless, the simple answer is to make a video for your DJ mixes. This comes with a big caveat: YouTube, Facebook, Vimeo – pretty much any high-traffic video hosting website – all have content detection engines that could easily make your video unplayable if the wrong content is included. Under US copyright law, DJ mixes typically don’t quality as fair use as they usually:

Based on anecdotal evidence, we’ve found that Facebook is very likely to take down DJ mixes (even if you livestream them using Facebook Live). YouTube is much more likely to identify songs within a video and monetize your video, giving the royalties to the artists identified.

YouTube is likely the best option for most DJ mix uploads because:

This is the most successful way to upload mixes to YouTube. Set a camera down in front of your DJ setup before you start recording your mix, and then upload the entire thing when finished. You’ve probably seen videos in this “bedroom Boiler Room” style before – but here’s a few examples.

DJ Ravine (who has shared CDJ-tips on DJ Techtools before) has loads of uploads on YouTube of his mix sessions. His videos are often themed to a specific genre or concept, on unique pieces of gear, offer multiple camera angles on the gear, and occasionally include a guest mixing alongside him (it’s usually Cotts).

Don’t believe that you’ll be able to upload mixes to YouTube without getting a copyright takedown? Delta Notch is proof that it’s not as dangerous as you might think – he has a ton of mix videos, including the above eight-hour mixing session.

Create A Live Visuals Video Of Your Mix

The other most common form of DJ mix videos include basic visualizers in them – or have simple video content that matches the mood of the mix. Take this upload – which uses freely available visual elements from visuals artist Beeple to complement the mix (which has just shy of 1 million views).

You could have something more dynamic if you sat down and crafted an advanced sound-reactive VJ set or worked up a unique scene in After Effects – but those are projects onto themselves.

If you want an easy, free way to record reactive visuals for your DJ mix, just use iTunes and a screen capture program. The drawback here is that you’ll have to record it in real-time, and have enough space on your hard drive for the resulting video capture:

Another option to create an unchanging title card or photo as the video content for your mix. This is the fastest way to make a “video” for your mix, but also by far the most boring. If you have a well-titled mix and a decent following, this solution can work just fine. As an example, here’s a mix by RamsesB, uploaded on prominent YouTube channel MrSuicideSheep. It has nearly 16 million views:

What About The Future?

The truth is that none of these solutions are really ideal for DJs and their audiences. Making a video just so you can upload your mix to YouTube, just so listeners can play your mix directly from their social media streams? It’s a lot of work. 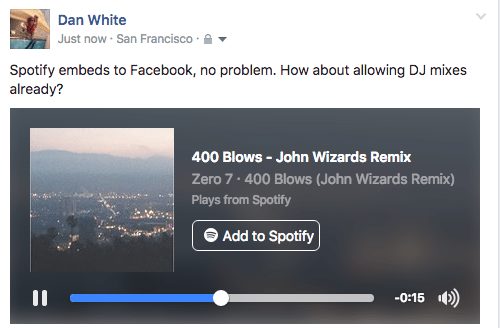 Ultimately, where do people who are consuming streaming music of any type go to? The answer is simple: listeners are streaming music on services like Spotify and Apple Music. DJ content hasn’t yet been introduced to those platforms, but both have announced partnerships with Dubset’s Mixbank that will eventually make this happen.

Stay tuned to DJ Techtools in the coming weeks as we hope to find out even more about when DJ mixes will start to get integrated into these platforms very soon.

Read Next: How To Record DJ Mixes Right (and Why It Matters)

Blend.io: A Peek Into The Future Of Music Project Collaboration?