Self-Promotion for the Working DJ

While I’ve made mistakes in promoting, I would like to share a few guidelines and tips that I have found tremendously helpful in promoting myself as a DJ and producer over the last five years in the hope that they should help you prevent the same mistakes.

Moving from Chicago, I was ill-prepared for Austin’s virtually non-existent electronic scene as Chicago’s well-groomed and stable scene had accustomed me to the comfort of abundant gigs and the freedom to focus on musical ability.

Though I knew promotion was an essential marketing tool, like many musicians, I cringed at the very word. I wanted publicity, but my idealism and ignorance persuaded me that musical talent alone would birth my career. This belief was irrefutably untrue. Apply the following suggestions to your own particular situation and you should see results like I did.

STEP UP YOUR REP

Unfortunately, the information age has added to the negative connotation of promotion by emphasizing depersonalized pop-ups, mass e-mails, invitations and friend requests on social networks. The sheer bulk of this type of promotion deters many potential listeners, while others become downright hostile to bands or DJs sending invites. Don’t get me wrong, social networking is not a waste of time and can be very helpful. However, music is about much more than an amount of online friends or a song on the radio. At its best, music becomes transformational to our lives. Who says promotion can’t do the same?

1. PROMOTE YOUR TRUE IDENTITY, NOT AN IMAGE

Promotion should become an extension of you and your music/style/sound, rather than an unidentifiable mass in an inbox. Listeners may love your sets, but the feeling of a personal relationship will keep them coming to shows, buying your tracks and supporting your overall efforts. An image only misleads people, and contemporary media-savvy people are interested in honesty. If you create a phony and manipulating facade, it will drive away many potential fans and possibly affect your creativity. Show yourself to your fans and listeners with authenticity. Fans are attracted like bees to pollen by someone to whom they can relate. In addition, honesty breeds self-confidence, and you won’t be scared to see value in yourself and your abilities. Good promotion helps listeners realize your worth and separates you from the pyramid-scheme musicians. For related ideas, I recommend Jason Timothy’s (Innerstate) recent blog essay on monetizing your worth.

Here are the tips I find helpful to show your personal side to fans:

Talk to your audience: At gigs, don’t separate yourself by sitting on a “cool” pedestal. When not playing, talk and interact with people, learn what music they are listening to and discuss venues in which you have found good music. At smaller shows, invite the DJ wannabes (the people at the front watching every move) into the booth area for a closer look.

Take pictures: Don’t be afraid to take pictures with people. In fact, take a friend with a camera and take your own pictures and post them on your website. This lets people access your website to help remember the night.

Dance with them: Get on the dance floor when not playing. I saw Gabriel and Dresden play at 1015 in San Francisco, and my only memory from the night is Josh Gabriel cutting across the floor as Dave Dresden played. I still think Josh Gabriel must be a cool guy.

Go see other musicians: Support your local music scene and see what types of sounds people are enjoying. Get inspired. Support and develop friendships with other local musicians.

Writers use hooks to keep you reading; politicians use them to get your vote; and TV shows use them to keep you watching. Good promotion utilizes a hook, which invariably involves a gimmick. Unlike the typical gimmick, however, a 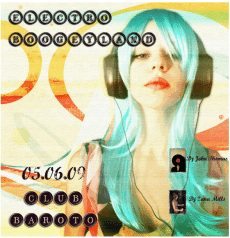 hook can be an honest communication of you as an artist — a concentrated message that expresses your identity, given to your audience in a creative way.

To create an effective hook I recommend:

Focus: I sit down and write out a clear, distinct message for my audience. I consider the age, location, gender and musical taste of the audience and decide how the message is best received. The more focused the message, the quicker the connection.

Be different: A DJ friend in Chicago plays deep, sultry house music. He was having a hard time handing out his demo, because so many DJs were doing the same thing. First, he spent a lot of money professionally labeling CDs to make them different, but at the end of the night a majority of them were left on the dance floor. One day his girlfriend (a sex education teacher) brought hundreds of extra condoms home. He attached them to the outside of his demo, and wrote “safe sex kit” on each CD jacket. At his next show, not a single one of his CDs was left behind. Originality produces both love and hate from listeners, but either way, you get a response.

Put your information on everything: It sounds like common sense, but I have so many CDs handed to me by incredible musicians or DJs, and I have no idea who they are. Your CD leaf and CD need a name and personal contact info on them. A brilliant hook has no purpose without an identity attached.

A brilliant hook contains a brilliant idea. Ideas have replaced materials as the infallible currency of today’s world. Marketing guru Seth Godin wrote a wonderful manifesto called Unleashing the Idea Virus, which I recommend reading to understand the importance of ideas. (You can download it free.) Godin suggests that ideas are the most powerful tools for marketing and promotion, because like a virus, they are highly contagious. According to Godin, an idea virus makes our identities attractive to customers and grasps their attention. Godin writes, “They attract us enough that we need to understand what’s inside: we set ourselves up to be exposed to the virus.”

Godin’s ideas have been a tremendous help in developing my hooks for promotion. Here I paraphrase his basic steps to making a hook or idea work well:

• Make sure your idea is worth talking about.

• Expose the idea to the right people.

• Use already hooked listeners to your benefit by helping them talk about your music optimally.

• Build a chain of communication with listeners who volunteer their attention.

• Amaze your audience, so they will reinforce your ideas and make them grow.

• Ideas don’t last forever, so realize when you need to change it up.

Musicians and DJs typically aren’t great businessmen. We think in creative rather than pragmatic ways, but even creativity needs a solid structure for its message to ring. As a song needs structure, so does promotion. If you are professional, the promoters, bookers and the audience will recognize your worth. Remember, people do judge a book by the cover. You don’t have to be physically good looking, but professionalism makes anyone an attractive entity.

Business cards: Business cards may seem outdated, but I think they’re one of the most helpful tools in promotion; they are a tiny physical reminder of you. A business card can be a creative manifestation of your identity, and one that is well made will be used rather than lost in the bottom of a purse or destroyed in a pocket on laundry day. Business cards should be creative, clean, visually attractive and contain your name, company and contact information. Take them everywhere; they are worthless left at home.

Press kits, demos and websites: Press kits are a great form of multimedia exposure. An effective press kit contains a plethora of personal information, credentials, pictures and demos. Though cheap bulk CD demos are fine to give away at shows, press kit demos should be attractive and well-labeled. A website must communicate your identity and be easy to browse. So many performers have websites overloaded with Flash and clusters of design, but spend very little time on the content of their site. Fans are more concerned with content and accessibility than pizzazz. Besides, if the Flash takes a few minutes to load, many fans will leave before they see it.

Don’t tick off promoters and production companies: This is one of my hardest areas, because I love music before money but many promoters are in the business only for money. When things go wrong at a gig (and they will), stay kosher with the promoter. Don’t let your reputation be damaged because a bad promoter with a big mouth is trying to blacklist you. If you find a promoter who really loves the music and shares your vision, marry them.

Take responsibility: Bad shows happen to the best of us. Always take responsibility with your fans. Not long ago, I had a show I promoted hard to get a great crowd. The show flopped, because the sound man was too stoned to realize the subs and monitors weren’t working; the promoters were too drunk to care; and my playing time was cut by 75% because the band before refused to get off stage. I had 300 extremely let down people who had shown up specifically for me. Although I was furious, that night I went home and personally wrote e-mails to as many fans as I could and promised them a full refund from my own pocket. No one wanted a refund, but many expressed how special it made them feel that I would apologize.

After implementing these promotional ideas in Austin, my musical career once again became fruitful and at times quite lucrative. Promotion has added to my maturity, creativity and self-worth as an artist. My fan base is steadily growing, and the fans I already have stick around because they believe in my particular brand of musicality. It is a slow process, but living my purpose and sharing it with others is worth doing right, and while promotion still doesn’t compare to the feeling onstage, it is an essential part of the process.

Building A DJ Team: The People Behind Successful Artists

Where to Promote Your DJ Web Presence in 2012

Publicity for the Working DJ