There might not be an occupation in the world better suited to showcase the newest incarnations of Solid State Drives than DJing. Performing with a laptop is comparable to putting your gear into a rugby match- anything goes and it’s best to prepare for the worst. Not only are you blocking drunken requests while crossfading, but bass from the speakers is constantly threatening to send your hard drive into a panicked seizure. In these messy environments we find ourselves playing, Solid State Drives make a lot of sense, but are they ready for prime time djing? Lets take a look. 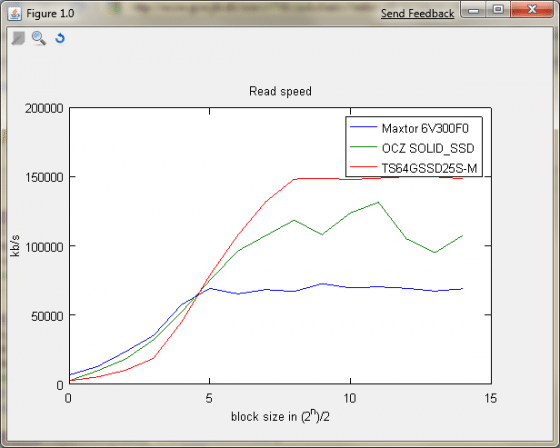 Foremost in our needs, there are no moving parts in an SSD. That means no spinning platters that can suffer from a mechanical break down caused by sudden jolts. For example, when the bus you are playing on swerves to miss a prostitute in the streets of Miami, jumps the curb and sends your laptop to the floor. Most SSD’s are rated to with stand up to 1500G’s of shock (Standard HDDs are rated at 2-300 GS) so they can theoretically withstand just about anything a club can throw at your laptop.

Second they are blazingly fast, equivalent to a 20000 rpm hard drive, which is twice as quick as the fastest hard drive in the world. The life span of a solid state drive is also equivalent to that of a conventional drive, about 5 years and some even use less power for longer battery life.  While this all may sound too good to be true-  SSD’s do have their dirty little drawbacks.

As of right now, SSD’s get slower the more you use them, which sucks, especially when writing smaller files like ID3 tags on your tracks. The reason this happens is because of the ways solid states write data across the drive. When data first gets written, recalling it can be up to six times faster than the fastest hard drive. However, when it’s time to re-write or delete data, things get more complicated and the drive can slow down.  Moving information around is job of the controller chip so its that processor that determines the quality of  writes, erases and rewrites. Unfortunately the controller chip is where the development of SSD’s needs to evolve and also where manufacturers differ. To further complicate things there are no standards to currently determine the rate of this degradation.

AND THE GOOD AGAIN 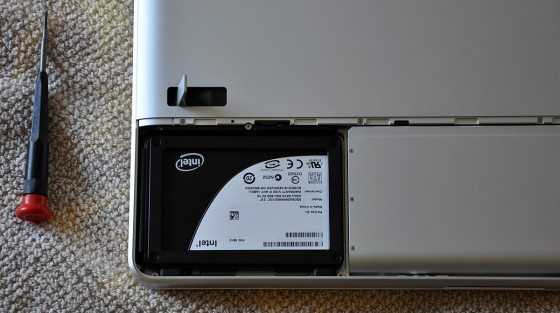 The good news is that drive speeds level out over time and still remain much faster than an ordinary hard drive. They can also be brought back to their highest speeds by doing a full format. In an effort to bring prices down there are many SSD manufacturers making substandard drives by using inexpensive controller chips- so be careful in selecting an SSD. In my research I found two drives that stood well above standard hard drives even over time, the Intel X25-M and the OCZ Vertex. The Vertex is not ready for firmware updates on Macs yet so that pretty much leaves many of us with the more expensive Intel for now.  While there are many more drives available,  without measuring standards it’s impossible to know whats gonna be junk and whats not. These two were tested extensively and the numbers looked really good.

LIGHTER THAN A BAR OF GOLD 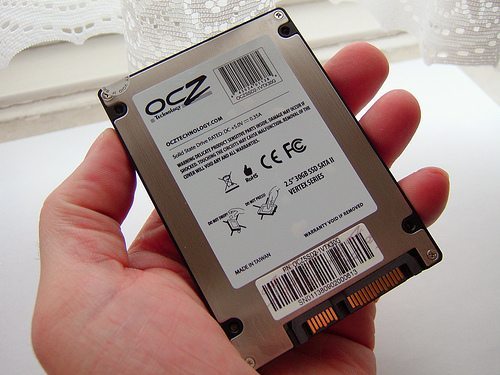 Cutting edge technology comes at a cutting edge price tag so SSD’s cant be compared to standard hard drives, which are typically an 1/8th of the price. “Is it worth it”, you gasp?  Well, It really depends on what you do with the equipment. If you don’t see yourself playing out that often then it’s probably not gonna be a good investment yet. If however, you’re regularly traveling through the battlefields of clubdom it’s going be an excellent investment. For the producer out there, SSD’s are also amazing devices. Most sounds are streamed from the hard drive, into ram and then into your DAW. So with a super fast SSD drive there are no more “disk too slow” errors, which alone is worth the money. For most people a standard drive will more than cut the mustard, but if your regularly getting paid good money for studio or dj work, investing in a solid state drive could be as important as the computer you put it in.