Improving Your DJing With Free Improvisation

Improvisation. The knack of feeling a crowd and adjusting the music intuitively is one of the few things that elevates the DJ above an iTunes playlist. So while we still remain ahead of the machines in that respect, is there anything to be learned from the improvisational musician? As the boundaries between DJ and musician become ever more blurred (turntablists, controllers, etc), can we find any parallels in the way they approach a performance?

What is free improvisation?

Improvisation is most commonly associated with Jazz music and masters of the art like Miles Davis (above) but it can be found in all styles of art including DJing!  Classically trained UK musician Simon Jones grew up on Bach and Beethoven but became frustrated at the limitations of musical notation (“if you do try and notate everything it becomes insanely difficult to play”) Instead, he began to explore just the opposite – music that is never decided until it is played and now leads improvisation workshops for Frakture – an organisation which promotes experimental music in the UK.

Simon explains that any musicians can take part in improvisation and there are no strict rules, indeed that is the beauty of it:

“What I like about improvisation is the ability to explore – you might start out with one idea but then you just go exploring from that idea and find new things that you might not have thought of before.”

This is experimentation with a capital E. An improvisation might start with a musical motif – anything from a simple guitar melody to a complex and random series of piano notes.  The other musicians then respond in their own ways. It’s about expressing a feeling through sound by responding to others or indeed leading them – just as a DJ might try to lead a crowd.

How does Improv fit into a DJ set?

Ean suggests 4 Ways to use improvisation in a set 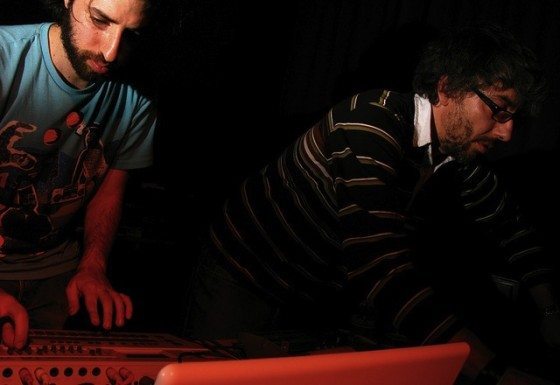 Having a conversation with yourself can be limited. If you improvise with others you open up all kinds of possibilities – when musicians improvise they can express feelings, interrupt each other, or argue with each other all using sound – it is the unpredictability that is so exciting.
Simon says: “Say I throw a riff out there or a sound, someone may react to that in a way I could never have dreamt of and then that creates something interesting for me and for that person…and hopefully for the listener as well because if I’m controlling everything it’s only what is in my mind.”

A simple question and answer session is a great way to practice playing with others. I personally have not played with DJs nearly as often as I would like but Q-bert is a pro at the art form of improvisation with another musician.

What mental approach should be taken to an improvisation? How much of the process is unconscious and how much conscious? Simon explains:

“You feel how someone else is moving – they might be going into a crescendo and building the music up and you feel that and you really start to follow that…your natural instincts might be to counteract that, but also you do need that to have that conscious decision-making process as well.”

This last point is crucial – be careful not to rely only on your intuition.

“If all you’re ever doing is just reacting subconsciously, you never really do anything new. You’re always just relying on your memory and the way you’ve reacted before”, adds Simon.

Here are a few tips for ways to stay relaxed, feel the music,  get more into the moment:

Improvisation is not just about doing whatever you want and hoping it comes together as Simon describes:

“If you’re doing whatever you want then you might impinge on the other people you’re playing with and so you can’t have total freedom of the individual within a group.” “You have to have dialogues within the group whether they’re musical dialogues or conceptual dialogues…a call and response type thing even.”

The video above is not improvised but a great example of quality DJ teamwork. The most notable aspect is that each musician is playing his part, without everyone trying to solo or stand out at all times.

4. Work From a Position of Safety

Most improvisers have a little bag of tricks they use to ease the improvisation.

For the turntablist there is a set palette of sounds and voicings that many DJs start with before the gloves really come off.  The point is that you can use these tricks as a basis to experiment from.

However, beware of relying too much on the same tricks as this can freeze up the organic nature of the improvisation and will reduce the chance to invent anything new. In the video above, Ean’s part is improvised, but built on a set of samples he was very familiar with. The familiar notes and progression provided a comfortable place to start with but the results were ultimately based on what the other musician contributed.

This one is for the more anarchic among you and fans of the composer John Cage – the guy who created the controversial composition 4’33’’ (four minutes and 33 seconds of silence to encourage the audience to listen to their surroundings). Ask yourself how will the sound be different if you are not in control of it?  What is it possible to create?  This random element can be seen already in production software with features such as a random setting on an arpeggiator. How can you deliberately provide randomness with the opportunity to show up in your practice?

Tutorial: Make Space In Your DJ Mix For New Tracks