Continuing with our pre-BPM launch coverage, we’re following the announcement of Pioneer’s entry into entry-level: the DDJ-ERGO-V. It’s yet another all-in-one two deck controller with a built in soundcard, and has a feature set that caters to, you guessed it, the beginner DJ. We’ve got the full details after the jump. 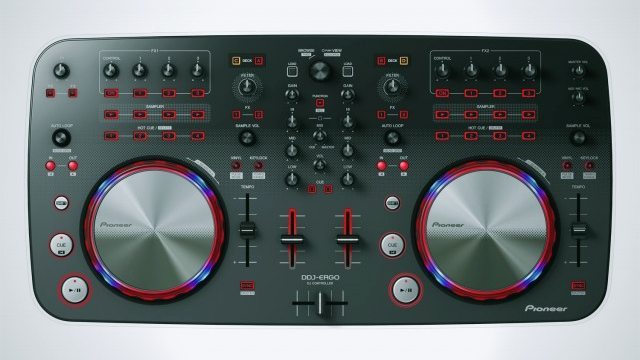 What does it do?

The DDJ-Ergo-V is an all-in-one two channel controller with jogwheels and the standard EQ, FX and transport controls that are expected in a controller. But the feature set gets a little bit more interesting than just the expected set: 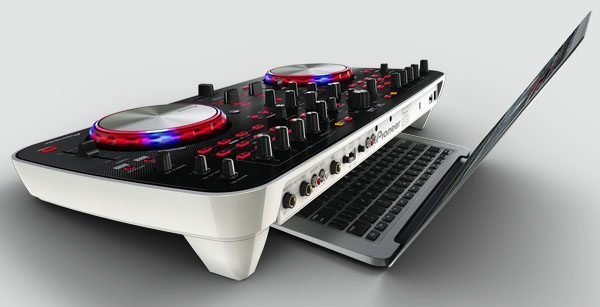 Pulsing lights all over the place, rounded corners on every possible edge, product photos with a MacBook Pro, and a shiny white backing. In our opinion, this all-in-one controller would look fantastic in an Apple Store. It’s sleek and drool-worthy, but still maintains a bit of a non-professional look in the process. We expect that Pioneer wants this controller to be seen by the masses in stores – masses who might not normally see DJ equipment, but would see this and understand and connect to it. More on that below.

Who is this for?

The Ergo is a natural addition to the DDJ lineup that came out at NAMM earlier this year – instead of making gear for professional, club DJs, this controller is clearly targeted at young people who are getting into this whole DJ thing. People who want to rock a house party (or a street corner?). Exhibit one: the promotional video above.

Look at all of those fashionable young people in really cool places DJing for their peers! Just like with Serato’s DJ Intro, Pioneer is catering to a very specific, hip-minded group of people.

Show me the money

So what does Pioneer consider to be an entry-level controller cost? The DDJ-Ergo-V is going to be £429/€499 – about $690. It’s not exactly cheap, and we’re pretty sure we’ll probably see plenty of other quality offers coming out of BPM that will be in this price range (for example, the Traktor S2 is $599, and we haven’t even found out what the new 4-deck Vestax controller will cost!)

Tech specs (we know you love this stuff)