Today Vestax announced a new controller in their VCI lineup of digital gear, the VCI-380. It’s a long awaited replacement for the VCI-300, which started off as the go-to Itch controller but was soon left behind by more advanced entries from Pioneer and Numark. The 380 offers one element that might pique the interest of controllerists: the same after touch/velocity sensitive pads found on the Pad-One.

Here are some photos and words directly from Vestax themselves. We look forward to completing a full review of the unit soon. -Ean Golden 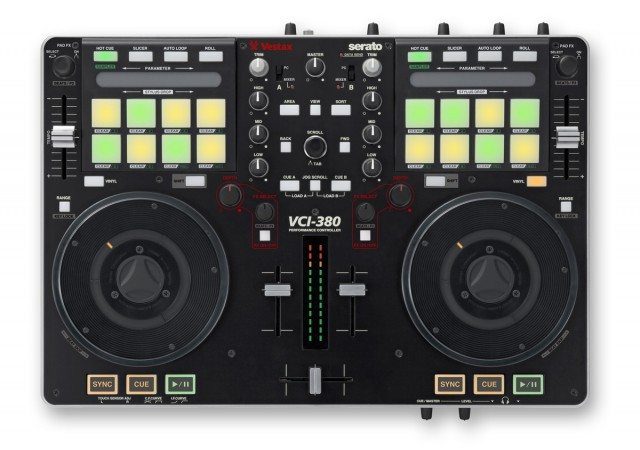 VCI-380 is a two channel DJ controller with a built-in DJ mixer, powerful and creative, opening the door to limitless possibilities of controllerism. Mix, scratch, cue, effect, sample, trigger, loop and slice. Every feature of the VCI-380 is optimized to enhance the DJs performance and take a new approach in manipulating music. Designed hand in hand with Serato, VCI-380 is bundled with ITCH, providing an arsenal of musical craft tools with perfect integrity, straight out of the box.

EVERYTHING IS AT YOUR FINGER TIPS

The 2 x 8 banks of FSR trigger pads on the VCI-380 are jam packed with creative Performance Modes such as the Slicer, Roll, Sampler, Loop, Hot Cue and Pad FX. With the given features you can trigger cue points, samples, loops, slice up beats, and shoot off Pad FX together.

Pad FX creates amazing combinations to manipulate music in ways nobody else has before: holding each pad (aftertouch) will modify the FX parameter, along with triggering Performance Mode functions. FX are an essential tool to spice up your performance; in addition to Pad FX, each deck features classic FX controls. The Ribbon control on each deck alters the parameters of Pad FX, swipes, holds and needle drops tracks.

The legendary jog wheels from the Vestax VCI series have stepped up in their game with an advanced structure and larger platters for extra stability and smoothness. The platters of the VCI-380 are highly responsive, transmitting MIDI signals with extreme accuracy. The LED needle point embedded in the jog wheel provides excellent visual monitoring, indicating the decks playback position.  The torque of the jog wheels can be adjusted to your preference, and as like all VCI series controllers you can pitch bend the track by touching the sides of the jog wheels.

The stand alone mixer function of the VCI-380 has great capacity for adaptability. The two hybrid channels are capable of mixing external devices such as CD players, turntables and MP3 players, together with tracks and samples Serato ITCH is playing. Each channel has an RCA Phono/Line input for limitless connection options, and the crossfader and input faders curve can be adjusted like any DJ mixer. Mixes with the input source can be tweaked with Trim, EQ and in addition, the FX knobs on each channel function as Hi-Pass filters, to add an extra touch to your performance.

The built in high quality 24Bit/48kHz audio interface based on technology developed with the critically acclaimed Vestax VCI-400, features BIT-Perfect audio powered by a studio grade asynchronous USB streaming system. This extremely advanced technology provides low latency, premium sound quality and outputs your mix, analog or digital, at its true clarity. Some say seeing is believing. For the VCI-380, listening is believing. 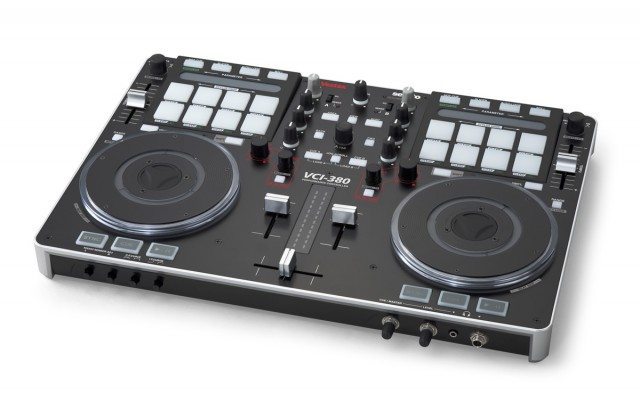