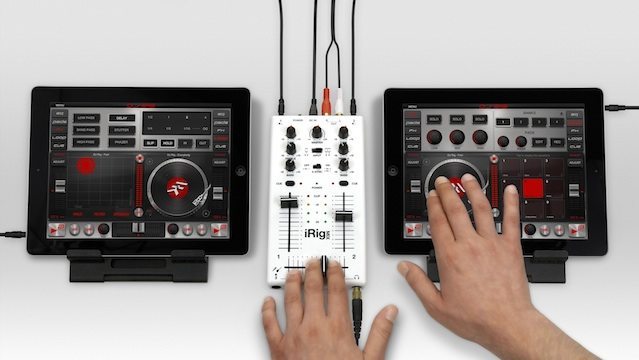 Could the new DJ Rig iPad app and iRig Mix hardware mixer be the real answer to the question of DJing with in iPad? IK Multimedia today released DJ Rig for iPad to the Apple App Store. The new offering adds many features to the previous DJ Rig for iPhone app, and includes a full DJ hardware simulated environment, with two decks, a mixer, multieffects and a phrase sampler. Hit the jump for more details, images and videos.

Central to the promise of DJ Rig is that if you comine two iPads running DJ Rig with a hardware mixer, you’ll have everything you need to run a full-fledged DJ set. That could be said of other iPad apps as well, but DJ Rig does offer a compelling and promising feature set, and IK Multimedia hopes you’ll couple it with the compact iRig Mix hardware mixer ($99.99) for a streamlined setup. 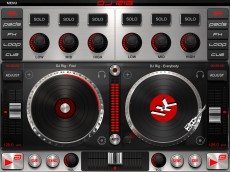 As you may expect from an iPad app, DJ Rig includes an AutoMix feature that can crossfade and mix music on its own, as well as other digital mixing aids such as Beat Match, Tempo Sync, and X-Sync that help align the beats of two tracks. 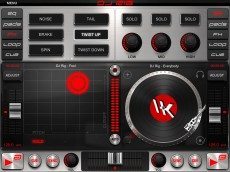 Hungry for effects? DJ Rig serves up 18 tempo-synced effects: Delay, Flanger, Crush, HP filter, LP filter, BP filter, Compressor,Wah, Phaser, Fuzz, Reverb, and Stutter, plus six that IK claims are new for this release: Noise, Tail, Brake, Spin, Twist Up, and Twist Down. You can tweak these effects til your fingers bleed with an X/Y touch interface.

The phrase sampler looks particularly cool. The 9-pad bank of samples lets you add your own sounds or grab live samples and loops from your tracks.

Curious and thrifty DJs may want to snap up DJ Rig for iPad from the App Store soon, as the $19.99 price tag is listed as “introductory.”

Check out some of the other DJ Rig for iPad features, and let us know what you think in the comments: 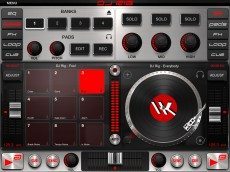 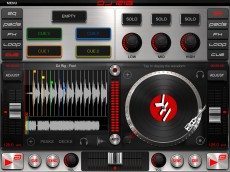