It’s been more than six years since Image-Line launched Deckadance 1.0. After many incremental updates, the version 2 beta has now reared its head to registered users. With a redesigned modular interface, 4-deck support, Smart Knobs, the slick Gross Beat rhythmic effect and other enhancements, Deckadance looks to give the giants of DJ software a run for their money for a second time. Read our full pre-review inside!

The Bad: Sampler can’t route through effects. Some bugs and very glitchy playback in the current beta. Some missing controller and plug-in support in the beta.

The Bottom Line: We have to reserve final judgment until the commercial version launches, but at the very least, Deckadance 2 plays a decent game of catch-up to the most popular DJ programs while adding some amazingly deep performance functionality that’s unlike anything else. 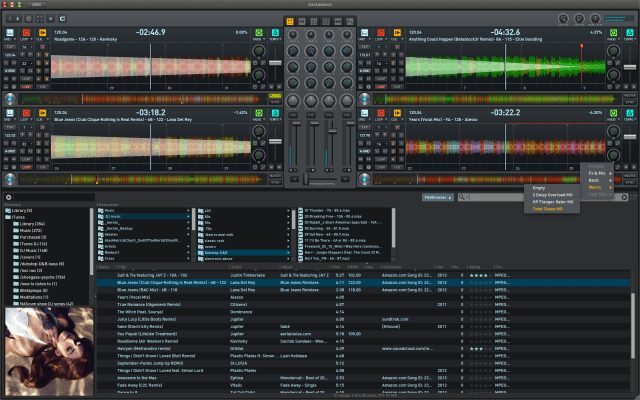 Keep in mind that as this is a first-look preview of a beta software, we’re neither being overly critical of some of the bugs that we experienced, nor did we attempt to find a comprehensive list of bugs. But the biggest problems we had with the beta revolved around the browser. For some tracks, the BPM info didn’t show up, even though they were analyzed/tagged in Mixed in Key and also loaded/analyzed by Deckadance itself. Other BPMs showed up just fine, however, so it was inconsistent.

Also, there were problems reading or finding some tracks in the iTunes library. Occasisionally, Deckadance 2 beta wouldn’t load some of them, even through in previous sessions it would.

The version we looked at (beta 8) didn’t have the preconfigured controller support loaded that the commercial Deckadance 1.94 did, and also the Effector VST plug-in that will come included with Deckadance 2 was not part of the beta download. There is, however, a short section on Effector below, just to show what the full version of Deckadance 2 should include.

The cleanly redesigned, modular Deckadance 2 interface feels more in line with the modern feel of Image-Line’s flagship software, FL Studio, but with an even better handle on clutter that can populate the FL Studio screen. On the Deckadance 2 top menu bar, buttons let you quickly toggle from 2 to 4 decks, and loaded songs get the delicious multi-color waveform treatment.

You can set the decks to include 0-8 Smart Panels, which are small control panels for segments of deck functions, including Loop, Cue, Grid, DVS, Key, Smart Knobs and Tempo. Within a small space, the Smart Panels offer a full complement of looping controls, 8 cue points to set/trigger per track, a convenient set of beat grid editing controls, etc. Like Deckadance’s other software controls, each Smart Panel control can be mapped to a MIDI controller from Preferences > MIDI Learn.

The Smart Panels of Deckadance 2 decks are a nice new cosmetic addition to the software’s interface, but one of the particular Smart Panels, the Smart Knobs, represent a giant leap forward in Deckadance’s programmability and real-time performance potential.

Each deck can have two Smart Knobs active. Basically, Smart Knobs group 2 or more functions onto a single knob, and Image-Line has included dozens of useful presets related to effects, EQ, the dedicated channel filter, track volume and the crossfader.

You can also while away hours of your time (or seconds, if you’re fast) creating your own Smart Knob settings, which you can then save to disk. You can choose any number of 20 parameters to assign to a Smart Knob, and each parameter has an editable x-y curve that determines the relationship between the knob input to the control output. You can also insert any number of control points to the x-y curve, and assign them shapes like Pulse, Stairs, or Half Sine.

Editing the Smart Knobs could be a brain-melting affair if you go really deep with it, or if you just want to do something simple like make an effect parameter go up while the dry/wet mix goes down, you can do that fairly easily.

(Editor’s Note: Do Smart Knobs look familiar? You might have seen these types of automation curves in the Mapulator Max4Live automation tool that BentoSan released over a year ago)

Definitely one of the coolest new additions to Deckadance 2, Gross Beat is a stand-alone plug-in from Image-Line that’s been built into the new DJ software. It’s a pattern-based effect that manipulates the pitch, playback position and volume of audio in real time to create a vast variety of stutter, repeat, reverse, gating, scratch, and other turntable-style effects in 4-beat (1-bar) chunks.

You can access Gross Beat from one of the six tabs on the Function Panel, which is the center section of Deckadance 2, comprising the mixer, effects, sample, Peakscope (vertically scrolling waveforms), VST plug-ins, and Gross Beat.

Each deck gets 8 Gross Beat slots for different effects, and there are well over 100 Gross Beat presets of different effect styles. You can simply click on the slots or assign them to controller pads/buttons to trigger the effects in real-time. You can even trigger Gross Beat effects from a paused deck, and they will play back in sync with the master track.

This is a really quick and fun way to add plenty of rhythmic flavor to your music, and of course you can create, edit, and save your own Gross Beat settings from the editor window, which uses pretty much the same x-y axis editor that the Smart Knobs settings use. You can click and drag the Gross Beat curve along the x and y axes, add Control Points, and even flip the curve vertically to see what wildness ensues. If the Gross Beat grid doesn’t make sense right away, you can just observe the grid while the effect plays back, and you’ll soon understand visually how it works.

Gross Beat settings can play back in one-shot, re-trigger, or loop modes. 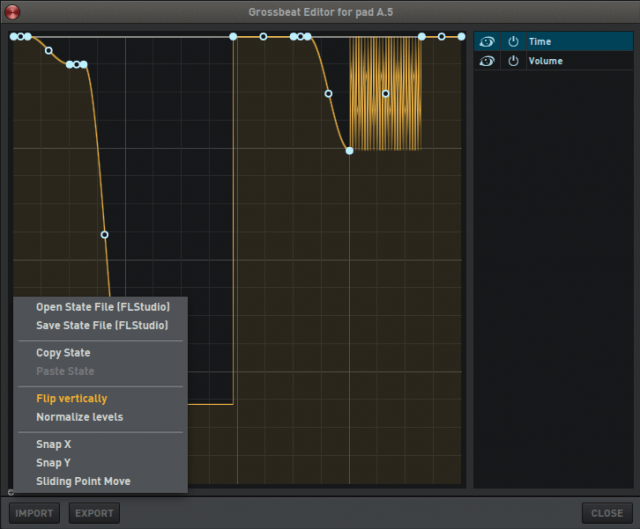 Another section of the Function Panel, the Deckadance 2 16-pad sampler almost speaks for itself with its standard 4×4 grid that you can launch in one-shot, trigger, re-trigger or loop modes. You can load up the sampler by dragging and dropping audio from the desktop, right-clicking and loading them from a menu, or recording them from one of the decks. You select the deck and the length of a sample, and then record a sample from an active deck, or drag it from a paused deck, and the sample will start from the current playback position. Deckadance reads the tempo of a sample and can then sync it to the master tempo.

You can assign pads to MIDI controls and save sample sets as an .xml file to be reloaded later.

The sampler is a great addition, but still a bit basic compared to some other DJ software samplers. The level control and headphone cue button apply to the whole sampler, rather than each individual pad. If you load a sample from your hard drive, it doesn’t keep the file name; you have to rename it to know what it is. Also, the sampler routes straight to the master output; you can’t run it through any effects.

From the FX section of the Function Panel, each deck can have up to 3 active effects from a list of 10: delay, flanger, phaser, highpass, lowpass, auto pan, transformer, bitcrusher, distortion, and reverb. These effects can be tied together through the Smart Knobs if you choose, and as a really cool bonus, you can choose to isolate the effects to any or all of the three EQ frequency bands: High, Mid, or Low. This may be a first for DJ software (let us know in the comments if not), but either way, it’s an especially nice treat for tweakers to play around with routing the effects to one, two, or all three frequency bands.

It’s no surprise with Image-Line’s pedigree of plug-ins coming from the Fruity Loops/FL Studio series that the Deckadance 2 effects all sound professional, holding their own in quality (although not variety) with Traktor’s vaunted effects.

As mentioned above, the beta download we got did not include the Effector VST plug-in, although this bonus should be included in the commercial version, so we will include a quick run-down of the plug-in.

Effector includes 12 effects — many basics, as well as a ring modulator and vocal resonance effect — that can be used one at a time. To get more effects out of Effector on a single deck, you can load more than one instance of the plug-in from the VST Host section of the Function Panel.

A Kaoss-style x-y pad dominates Effector’s interface, and the effects’ tweakability hedges on X and Y parameters, as well as the modulation of the X and Y position.

In Deckadance 2, you can link Effector or any other VST effect to a controller by first assigning a VST control to one of the VST Host controls, and then MIDI-mapping that control to your hardware.

While it’s still in beta, we can’t judge Deckadance 2 fully yet. We experienced some very glitchy playback — especially with three or more decks playing but sometimes even with one deck — that would be unacceptable in a commercial release, but which we have to presume Image-Line is working on. It may be safe to say that the biggest disappointment about Deckadance 2 is that it took so long to arrive. All’s well that end’s well, but in the many years since Deckadance first launched it has fallen off the radar somewhat to some digital DJs who otherwise may have jumped on a rapidly developing program like this. 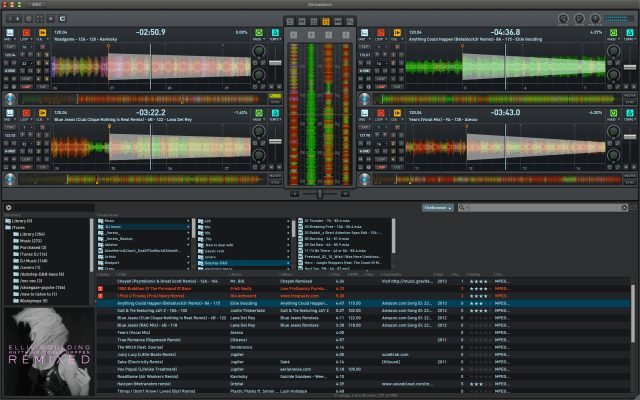 However, now Deckadance 2 can be yet another disruptive DJ software, such as MixVibes Cross, to give you interesting alternatives and to keep the top dogs on their toes. The new design looks very clean, and in my opinion, rather beautiful in its symmetry and vibrantly-colored waveforms. The Smart Knobs and Isolator Effects are innovative, and the Gross Beat and Effector plug-in add a ton of value. Besides all that, the customizable Smart Panels on the decks and the handy beat grid editing tools all chip in to contribute to Deckadance 2’s unique feel; it’s not a copy-cat product.

Our beta copy did not include the same preconfigured support for MIDI controllers that the commercial version has. And either way, the list of Image-Line’s preconfigured controllers for Deckadance could use a freshening up with some newer controllers.

There is, however, a promising pairing on the way with Behringer’s upcoming CMD series of controllers. It was revealed at NAMM in January that the CMD products will include Deckadance LE 2 software; a limited version, but one that will hopefully come with a discounted upgrade path to the full Deckadance 2 Club Edition. The modular nature of the CMD controllers seems to fit with the spirit of Deckadance 2’s modular interface, and several of the button-and-pad-heavy Behringer units look perfectly suited to the Deckadance Gross Beat, Sampler, and 8 cue points per track, which can eat up hardware controls with a quickness. We’re looking forward to seeing how these two product lines match up.

Review: The One DJ 1.2 Software