This Is Not The Next Midi Fighter

In June, it will have been four years since the introduction of the original Midi Fighter, a community powered project that sprung from the shared passions of people from different corners of the world.  Today, to keep that tradition alive, we’re announcing the next addition to the family. This new controller will be a companion to the now-classic arcade button grid, but with a focus on expressive analog control. The twist? Instead of trying to guess what you want, we have decided to crowdsource the design and let our community build the next Midi Fighter.

Pick a wide range of useful analog controls, and put them in the classic Midi Fighter chassis with customizable tops and rubberized cases so DJs and producers will have a simple, playable surface with a few great controls.

The hard part was deciding what to put on it. Instead of making a guess, we’ve decided to take a gamble and let you design it.

VOTE ON THE ENTRIES HERE

Today will launch the start of a week-long contest in which we’re asking you to show us what the community really wants from a new controller. This is your opportunity to directly influence the final design of the Midi Fighter X – resulting in one of the first controllers with a truly crowdsourced design. Our hope is to come up with something in the end that everyone really wants – and to include you in the process from start to finish. 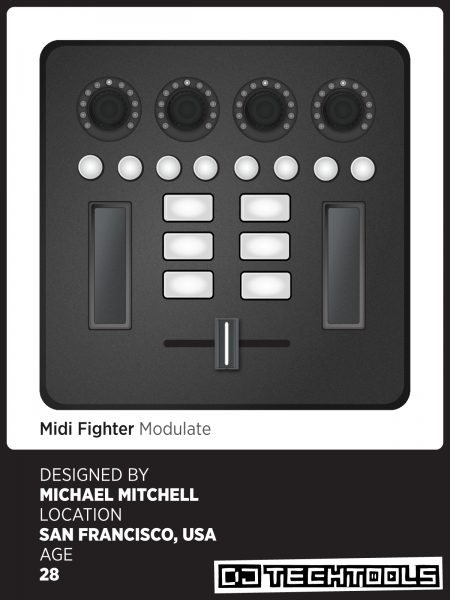 In order to help designers build the ultimate performance interface, we’re providing a set of graphical assets that anyone can use. The graphics pack, (downloadable here) includes:

Even if you don’t have Adobe Illustrator, you’ll be able to use the included assets to make your own design in a free program like Paint.

The final entry should look something like this the image on the right! Be sure to come up with your own name for the design just like Michael’s “Midi Fighter Modulate” example.

RULES AND HOW TO ENTER

The rules for this contest are super-simple so that anyone can enter: 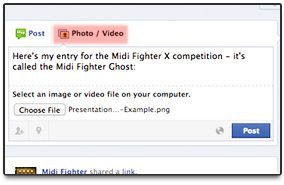 When you’ve finished your design(s), you’ll want to submit your entry by posting it onto the the Midi Fighter Facebook Page wall (see the example at right). Remember to include a description explaining how you would use the controller.

The deadline for entries is Monday, April 29th at 12:01 AM, PST. We’ll then publish the six winners on the following Friday, rendered to appear like they would in their final manufactured form.

Rather than make a large, complex controller – we thought it wise to make things simple, but expandable. This new analogue controller will have a USB hub built in, which allows chaining of other devices so each night’s set-up can be as simple or complex as you need.

Winners of the contest will be chosen based on community feedback and discussion – one of which will be the most-liked design on Facebook. The other five will be at the discretion of the DJTT staff.

The winning designs may not be exactly the final controller, as we may combine elements from the most popular submissions.

Prizes: All six winners will get their choice of a Midi Fighter Spectra or 3D. The winners will also be admitted into the exclusive beta test program for the Midi Fighter X project. This means they’ll have early access to test units and be the first in the world to receive the final product when it’s done!

Even if you don’t submit a design, we need everyone to comment on the entrants as they come in and talk about what will make this controller perfect for you.

Got questions about the contest or thoughts about the next era of Midi Fighter? Let us know in the comments below.

VOTE ON THE ENTRIES HERE