Pioneer DJ Divison Is Up For Sale

Today Reuters reported, and Pioneer confirmed they are “considering” selling their highly successful DJ division. People familiar with the transaction indicated such a deal could be worth 570 million US dollars. Pioneer is certainly at the top of their game with some of the most popular DJ gear in the market bearing their stamp this year. Perhaps it’s a good time to go out on top – but what does that mean for the DJ industry?

WHAT COULD BE INTERESTING

While consolidation is rarely good for diversity in a marketplace, we can’t help but wonder what would happen if the software creativity of Native Instruments were to link up with the hardware presence of Pioneer. It would take many years for either camp to advance in their respective expertise and a combination of these resources could immediately lead to great possibilities for the customer, or just limited competition.

Numark’s parent company, InMusic, has been on a buying spree lately, picking up smaller brands left and right (Akai, M-Audio) but with their product line firmly intrenched in similar territory as Pioneer, this feels like an unlikely alliance.

WHAT WILL PROBABLY HAPPEN

The size of the transaction, speculated at 570 million, is quite large by DJ industry standards and probably out of reach for companies like Numark or Native Instruments. Instead, a boiler-plate private equity or hedge fund deal is a realistic outcome.

Similar transactions included Garage Center, sold to Bain Capitol for 1.6 billion and Allen and Heath, which sold to Electra Partners for 43 million earlier this year. A bank-backed sale would likely leave most of the working parts of Pioneer DJ intact and simply shift ownership to a new group of suits. I have long felt that this industry could do with less bankers and more passionate entrepreneurs – but given the current cycle of the market, that looks increasingly unlikely.

One group you might consider, is Silverman’s SFX Entertainment adventure. Presumably they have access to the capital to fund such a deal, although this would almost double their market cap in a single transaction as SFX is currently worth just 610 million, with their stock declining over the past year.

As the digital DJ domain nears almost 15 years young, it continues a march towards lower prices and a broader consumer reach. In that vein, it might not be that far-fetched to see a major consumer electronics brand swoop in to democratize the line even further. Even though the new DDJ-WeGO3 at a very accessible $349 with an iPad connection we still have not seen a “Flip Cam moment” that the digital photography world saw 10 years ago.

What happens when $99 and an iPhone can give young people around the world an amazing music experience? Possibly a new surge in our DJ technology space, which we’ve seen to be in a slight decline recently. 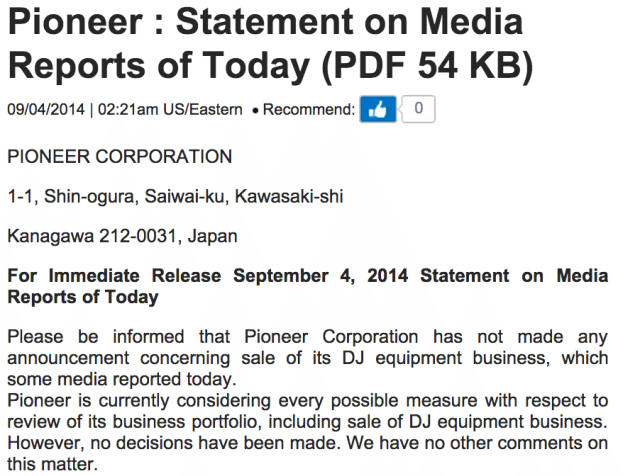