Mixvibes has recently announced the release of Cross DJ 2.0 for the iPhone and iPad which comes with a new aesthetic and more features for the User. iOS devices are popping up left and right but with Cross DJ, there is a little more than just two audio players and volume control. Similar to their recent Cross DJ 3.3 update for the desktop, the iOS highlights recent progressions made in the software that focus on creating a new, alternative solution for mixing applications.

The first thing users will notice about Cross DJ 2.0 is that the app is smaller than previous versions and much more geometrical. Looking at Cross DJ 2.0, I notice that it seems to be more will put together and all the controls sit tightly with the rest of the app. Users will enjoy this because the app is now much less busy and has the room to use the controls without accidentally hitting another fader, knob, or button by accident. Also, the app features nicely designed XY pads for effects that give users better control over the amount and intensity of the effects. The pads are also slightly transparent so you still know whats going on behind the effects while you’re using the effects. The waveforms have also been redesigned to be a lot larger than before. Bigger waveforms help DJs understand the structure of their track and these new waveforms definitely explain the track in full detail.

Aside from aesthetics, Cross DJ 2.0 also runs a lot better than its predecessor. Users will be happy to find that the app’s new interface also allows for faster run-time which solves old issues of lagging and audio dropouts. Also, Cross DJ 2.0 takes advantage of the processing power within the new iPads and iPhones. Everything is much quicker and the display is beautiful scaled to the new sizes of iPhones. 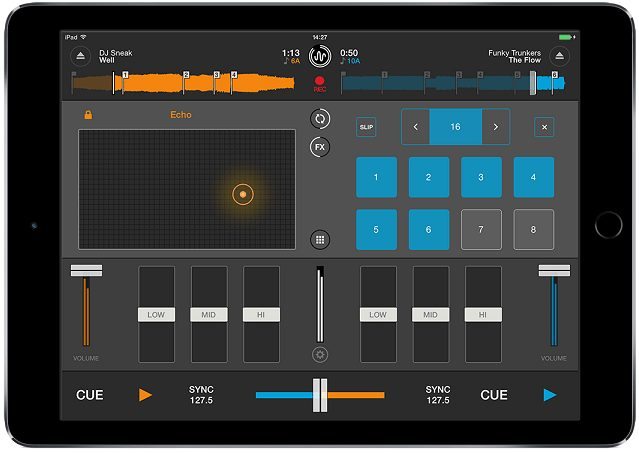 Cross DJ 2.0 shows some potential and may be competition for Traktor DJ. Mixvibes has used a lot of resources to update their DJ software and I think the fruits of their labor will show. The software is solidly put together and someone can easily mix using it. Cross DJ 2.0 may not replace DJs’ set-ups anytime soon  but it does stand as a useful tool that shouldn’t be over looked.