Years after their first appearance, many Thunderbolt ports still go unused. If you’re running low on USB ports for your DJ rig, live show or studio, a Thunderbolt audio interface can free up a USB port while providing crazy fast bandwidth for pristine high-resolution audio at nearly zero detectable latency.

We put two portable, DJ-appropriate Thunderbolt soundcards through the paces for your consideration: the Universal Audio Apollo Twin with onboard DSP and included plug-ins, and the Resident Audio T4 with MIDI I/O.

Thunderbolt breakdown
Thunderbolt interfaces may not be right for everyone, for the simple fact that most Thunderbolt products—hard drives and soundcards included—still cost noticeably more than their USB counterparts. Thunderbolt requires more in the way of support electronics, the cables themselves have entire chipsets in them, hence the increased cost.

Because the standard hasn’t been widely accepted yet, Thunderbolt devices haven’t benefitted from economies of scale like USB devices, and to some extent, FireWire devices before them. As a result, Thunderbolt expansion docks come in pretty steep at about $250 each, and even Thunderbolt cables average about $30 for a 3ft. or 1m cable.

However, the Thunderbolt port carries some power once you let the genie out of the bottle. It is spec’d at 10 GB/s per channel (two channels), compared to USB 3’s 5 GB/s (and 12x the bandwidth of FireWire 800); you can daisy-chain up to six devices; and it can provide bus power (more background on USB 3 and Thunderbolt here). Thunderbolt’s massive bandwidth clearly sets it apart the most; if you’re working with high-resolution, uncompressed audio and want super low latency, a Thunderbolt soundcard could be your dream machine.

Finally, as Ean spelled out in DJTT’s recent overview of powered vs. unpowered USB hubs, those of us using modular setups with many MIDI controllers quickly run out of USB ports, and even hubs have some limitations. Taking your soundcard out of that balancing act may lift a burden off of your live setup.

Now that you’re onboard with Thunderbolt, let’s compare the two units we tested.

The Universal Audio Apollo Twin Bottom Line: Good for DJs but great for producers, especially for those who need some portable DSP power. Onboard DSP for powering 10 included high-end Universal Audio plug-ins. Phenomenal sound quality and unmatched output levels. Doesn’t include a Thunderbolt cable; look for dealer specials that throw in a cable. Requires AC power rather than Thunderbolt port power. Can work independently of a computer. Mac only. 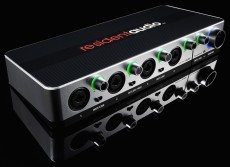 Both interfaces take up close to the same overall footprint and weigh just more than two pounds. Likewise, both display extreme sturdiness with a metal alloy chassis that appear ready to take a pounding if they have to. Either one would make a suitable mobile recording/performing interface, as they’re small yet robust enough for travelling. Unfortunately, neither unit includes a second Thunderbolt port that you could use for daisy chaining other devices. However all current Mac computers have at least 2 thunderbolt ports, with the exception of the MacBook Air.

The T4 makes use of more traditional controls—like individual level knobs for each input. However, those level knobs have useful level-meter LED rings that indicate the levels as green, yellow or read. 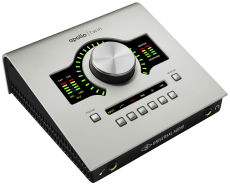 On the other hand, the Apollo Twin operates with a one-knob + LEDs interface. You choose the input and output sources with top-panel buttons, and the LED rings around the push-button big knob indicate the input or output levels for each source. There are also LED level meters for the input and output. Additional buttons let you choose options for the inputs, such as a low-cut filter, phantom power for mikes, a pad to avoid clipping, etc. Apollo Twin’s single knob feels handy and makes it a convenient desktop companion; pressing the knob works differently according to the mode, for example, muting all audio going to the Monitor outs.

The T4 interface comes with a single Mac/PC driver/control panel. That Thunderbolt T4 Panel app lets you see and control the input and output levels, as well as choose the audio sample rate for the T4.

A large portion of the Apollo Twin’s premium pricing comes from the onboard SHARC DSP—one DSP chip in the Apollo Twin Solo ($699) and two in the Apollo Twin Duo ($899). Those DSP chips handle the processing of the 10 free high-quality UAD-2 plug-ins that come with Apollo Twin, as well as any of the dozens of other Universal Audio plug-ins made for high-end recording, mixing and mastering that you may purchase.

Those plug-ins are hosted in the included Console software, which mimics a real-world analog mixing console, as well as offers control over all of the Apollo Twin’s functions. Plug-ins can be hosted in any software that accepts VST, AU, RTAS, or AAX.For every Apollo Twin input and output, the console has a full-scale channel strip, where you can insert several preamp and/or processing plug-ins for real-time effects on your signals. Even better, the Console has virtual I/O, so you can route tracks from any Mac DAW in and out of the Console mixer and apply your UAD-2 plug-ins to them.

The Console is always near-zero latency regardless of the computer’s buffer size. By using the Virtual I/O, it’s possible to keep performance/DJ software “lightweight” so it’s more stable at low buffers and leaves the heavy processing to the Console. A separate Console Recall plug-in that you insert into your DAW session will save and recall the Console settings you use for that session.

Universal Audio’s Realtime Analog Classics bundle consists of 10 high-class signal processors in VST/AU/RTAS/AAX 64 formats, so you’re covered no matter what Mac host software you use. Most of its plug-ins emulate classic analog hardware, such as the two Pultec EQs and the 1176SE and 1176LN limiting amplifiers. You also get Softube guitar and bass amp simulators; an excellent all-purpose reverb, RealVerb Pro; and the all-in-one channel strip, CS-1 Precision Channel. The high quality of the plug-ins, as well as the external processing power of the DSP make the Apollo Twin a welcome relief for laptop producers both at home and on the road.

If you’re wondering just how many plug-in instances the Apollo Twin can host per DSP chip, the processor load varies per plug-in, but there is an instance chart on UA’s site. At the extremes, you could run as few as two UA 610-B Tube Preamps (in stereo), or as many as 61 UA 1176SE limiters (in mono). A final software utility, the UAD Meter & Control Panel, shows you the current processor load on the DSP. And no, you cannot use the Apollo Twin’s DSP to power other branded plug-ins you own.

DJ-Specific Use and Sound Quality

Both of these interfaces have four channels of output, as well as stereo headphone outs, so you could use either one to run sound to both main and booth monitors, as well as monitor your cue with headphones.

The T4 is a little more flexible here. Because it has four independent mic/line inputs—as opposed to the Apollo Twin’s two analog mic/line inputs—you could feed it two stereo audio sources (in addition to your computer’s audio) or one stereo source and one or two microphones. The T4’s Output 3 can also act as a secondary stereo headphone output, which disables its Output 4. Lastly, the T4 includes MIDI I/O ports, while the Apollo Twin does not (however, most modern midi controllers and hardware send Midi over USB), so for the stage or studio, it can help you control all of your hardware gear with MIDI ports.

Another potential advantage to the T4: It draws power from the Thunderbolt connection, so you won’t have to hunt for another outlet for it. The Apollo Twin requires an included AC power supply (with international plug adapters), which twist-locks into place so you won’t accidentally pull it out from the base of the unit.

Perhaps because the T4 draws power from the Thunderbolt port, it’s output levels aren’t quite as high as the Apollo Twin. To be sure, the output levels on both the headphone and main outputs of both units felt powerful enough for live DJ use, but the Apollo Twin can really blow up the SPLs if you need it to (see the dynamic range numbers in the chart). The Apollo Twin also functions on it’s own without being connected to a computer. You can even set up an effects chain—say on a microphone input—with a computer connected and then disconnect the computer and use the Apollo Twin independently with the effects chain intact. The full state of the plug-ins only persists until the unit is power cycled.

While the Apollo Twin had the louder outputs, both units exhibit stellar sound quality; in fact, it was tough to distinguish much difference at all in their respective sounds. Both units pass through extraordinarily transparent and pristine audio quality, with little to no noise detectable on the analog inputs. The T4 displayed just a slight tinge of noise, but overall it was very clean.

We know Universal Audio for having a deserved reputation as a maker of studio- and audiophile-grade hardware, so the Apollo Twin’s performance didn’t surprise us. For Resident Audio—a new company with a staff experienced in audio—to basically match the Apollo Twin’s audio quality with the T4 (when comparing the same audio material), bodes well for its future.

As far as latency goes, you can never reach absolute zero latency, but with these Thunderbolt units, the throughput is so high that I couldn’t detect any latency either with DJ software or when recording and composing with Ableton Live 9.

As previously mentioned, just having a Thunderbolt port on a device still ratchets up the price a bit. Besides the inherent advantages of Thunderbolt, these two interfaces offer excellent audio and build quality, but something roughly equivalent to the T4 using USB—perhaps the popular Focusrite Scarlett 6i6—costs $299.

With the onboard DSP and excellent plug-ins of the Apollo Twin Solo, it’s still very reasonably priced at $699—$200 more than the T4. A USB/Firewire alternative to the Apollo Twin, the MOTU UltraLite mk3 Hybrid includes onboard DSP and effects for a street price of $549. If you’re really on a budget it may be best to check out these budget soundcards.

Meanwhile, most other Thunderbolt audio interfaces on the market have more features and cost north of $1,000. One exception: the Zoom TAC-2 ($299) features Thunderbolt but only has 2 ins and 2 outs.

If your main concern is conserving USB ports, the Novation Audiohub has been well-reviewed. It includes a 3-port USB hub, as well as a single RCA stereo input and multiple outputs.

While it feels like the time is right to pull the trigger on a Thunderbolt interface, increased competition may start to drive the prices down later this year. For example, at the 2015 NAMM show, M-Audio announced a 12-in, 12-out Thunderbolt interface called the Deltabolt for a price of $499, but it’s not scheduled to hit streets until August.

In the here and now, both of these units are impressive. We’ve covered many of their differences, but the most significant one is the Apollo Twin’s onboard DSP and included plug-ins. If you have a definite need for such niceties, it would be the one for you. –Markkus Rovito

Would you use a thunderbolt soundcard? Or still to expensive?

Let us know in the comments below.