Ever since their first release, Algoriddim has been working hard to improve djay and djay Pro to meet the needs of the digital DJ. In a new update coming to both the mobile and Mac applications, users will have access to plug-and-play CDJ integration, an Apple Watch app that goes beyond notifications (iPhone only), and a one of a kind video DJing space. Algoriddim has worked hard since we last heard from them and DJTT has all the insider information below.

The major update Algoriddim released today comes to the djay Pro Mac App. The first major improvement users will find is a seamless integration between Pioneer products and the software. DJs who are used to the djay ecosystem will no longer have to worry about DJing on CDJs in the club. Algoriddim partnered with Pioneer to bring forth plug-and-play integration of djay Pro with the CDJ-2000nexus, CDJ-900nexus, and XDJ-1000.

djay Pro isn’t just using the Pioneer CDJs as controllers. DJs will have access to playlists, song information, and waveforms (including those tracks on Spotify) using the screens. As for hardware control DJs will find slip mode, scratching, pitch bending, looping, cueing, and master tempo controls. The audio will be directed out of the CDJs allowing for users to mix externally using a DJM mixer, most likely.

A lesser known breed of DJs are the VJs who mix audio and video during their sets. Video DJing is an art to master just as much as DJing is, but Algoriddim is making it easier for DJs to mix video during their sets. The update comes with a package of video files that come as stock footage, loops, and visualizations. DJs can play any songs in the mixing window and then by going into the video view the DJ can create visuals to accompany the track.

Karim Morsy, CEO of Algoriddim, gave DJ TechTools a walk-through on video DJing with the software and it is really straight forward. Simply drag video files on to decks like a DJ would with their audio tracks, apply different effects with the click of a button, and even add some text to personalize the video. All the visuals are audio reactive and the DJ can even set the video clips, jump back to the mixer view, and continue to DJ as the visuals play. DJs can also record the audio and videos of their sets in the background.

Aside from the exciting updates of the software, djay Pro has also made some strides in other areas, such as with Spotify and the Library. DJs who utilize the integration of Spotify can now take advantage of the high quality bit rate with up to 320 kb/s. The library also received some developer love which includes improved iTunes and Spotify integration, a cover collection view, complete Finder integration, and a history section which also can be exported as CSV, iTunes, or a Spotify playlist. The libraries of other devices using the djay app can synchronize up to 8 cue points for each track on djay Pro. 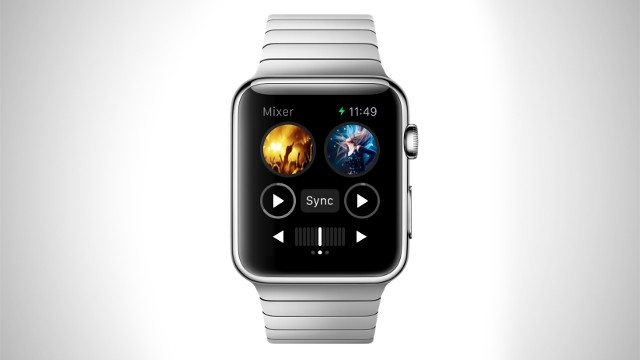 Before the Apple Watch is even released, Algoriddim jumped to have djay 2 ready for the hardware. Most apps available for the Apple Watch are for notification purposes which is not the intended use for the djay app. The djay 2 app for the Apple Watch will be a minimalist way to DJ. As seen in the video above, DJs will have access to their library, the mixer, and the effects. Theoretically, a DJ could leave their iPhone in the booth, use the restroom or get a drink, all while having control over the music. Who knew DJ’s could benefit for wearable tech?

The djay Pro update is free for all current users and new users can get it on the Mac App Store for $49.99.