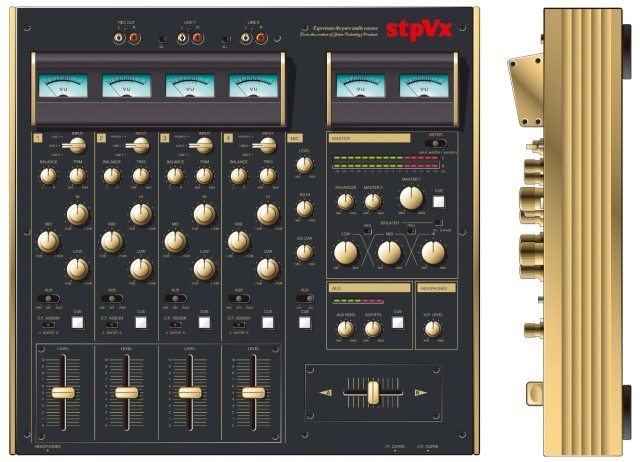 This is the first time we’ve seen the entire top of the mixer in full – and while this image is just a mockup, there’s more photos that show it to be accurate to the final design.

The first thing to note is the analog VU meters for every channel, and then two for the master channel. There’s also a traditional VU meter for the master out, likely so that unaccustomed users can quickly tell when they’re peaking. Check out the below photo of a prototype unit how much those VU meters sit up above the mixing section – it’s a cool touch, if a bit retro in style:

Each channel has three input options – three of which are phono and the other nine are all line level. Worth noting if you look at the top of the mixer (carefully tucked behind the VU meters but still more accessible than the rear) are three RCA ports – one REC OUT and two line inputs (7 and 9) which have switches that can change them to something labeled “IDJ” – we suspect there’s a to-be-announced computer connection here?

There’s also a pan control on every channel – something that most DJs won’t find especially useful but is a nice bit of extra control – could be particularly useful if mixing on all four decks with Stems.

The EQ knobs are staggered similar to Allen and Heath mixers – with mids to the left and highs and lows to the right. Oddly, no channel filters on this unit – just low/mid/high isolator control on the master output. There is an assignable AUX send/return, which can be set to pre- or post-fader on each individual channel.

Each channel can also be assigned to the crossfader, which is interestingly positioned to the right of the channel faders and not below. It’s this layout decision that starts to make me wonder if STP Vestax founder Hidesato Shiino was using the Vestax PMC-CX as a design reference: 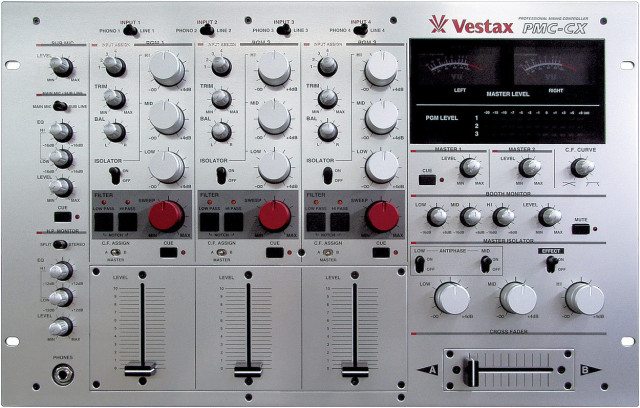 Who Is The Phoenix Mixer For?

We’re still left wondering who the ideal user of this new stpVx Phoenix mixer really is – what DJ market is the company targeting? Hidesato Shiino has made it clear that this is a small-batch and not immediately going to mass market. He’s written a bit more on the Paco1977 blog:

“With the final testing completed, we are now in production phase. The appearance of the final model is as we have announced. Latest images on our site are without the final “cosmetics”. We have thought carefully about the DJ’s needs – both for the amateur and professional – in the production of this model.

There are very few mixers that have been released in the market recently that are designed from-the-ground-up. […] The highest level specifications have been applied in the design of the Phoenix, which will be evident to the user from the punching sound and dynamic range this mixer will deliver. In addition, the Phoenix will be the world’s first 4-channel cross fader.”

We’re not sure what that means – right now it just looks like an assignable crossfader, just like most other 4-channel mixers. He goes on:

I have deviated from the usual way of thinking in the industry with its cost-cutting and resulting performance-degradation, and have built a product that aims to deliver for the DJ both high-quality sound and professional operation without compromising on product-performance. Even the power-supply exceeds the usual professional specifications.

We have carefully considered the requests and input from many professionals regarding the diversity of sound sources, and have integrated their thinking int our design specifications. The final sales price is being calculated, and we expect it to be within the usual range of high-quality professional equipment. Pre-orders will be accepted from mid-April, with product sales commencing in May 2016.

In the comments, let’s take bets on which premium DJ mixer will be the most expensive: Richie Hawtin’s new “Think Differently” mixer, the stpVx Phoenix, or the just-announced $3,800 Funktion-One FF6.2?