One of the dirtiest jobs in the DJ business is marketing and promotion. If you already have a big following, you could probably hire a publicist to do the promo grunt work for you. But how do you get a following without promotion? There’s the catch. Although DJing is good work if you can get it, it is still work. You’ve got to be your own hype man before you hit the big time. Luckily, the wonders of the modern world – technology and outsourcing – have your back. Read on to discover tools and services that will help you spice up your Facebook page, create a personal iPhone app with no coding required, and blast a press release to the music media masses. 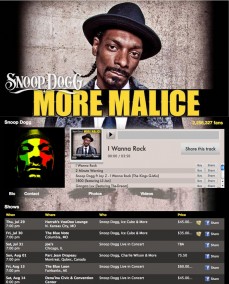 If you’ve seen those “Life Without People” specials on TV where all of the sudden humans disappear from the big cities, then you know what it’s like to be on MySpace right now. The years of infrastructure are still there, but without all the folks. On the TV show, no one knows where the people went; in real life we know they went to Facebook. But the lamentable fact for DJs and musicians is that fan pages on Facebook suck. RootMusic.com has changed all that with its BandPage Facebook app.

If you administrate a Facebook fan page, you can add the “BandPage” tab to your Facebook fan page and make it the default tab people arrive at when they visit your site. You still get your Wall, Info and other tabs, but your snazzy BandPage tab will be the first one they see.

With BandPage, RootMusic gives you a simple software editor that lets you add a SoundCloud player, a Bio Pane, and a nice calendar of events to your Facebook fan page. SoundCloud music plays uninterrupted while the fan explores photos, Wall posts or anything else on your page. The basic BandPage tab is free, but if you really want a suave page like the Snoop Dogg example shown above, BandPage Plus will cost you $1.99 a month, which gives you customized font and color settings, background images and a customizable banner image.

BandPage users also get a new URL for their Facebook page that looks like “http://www.listen.to/yourDJname” so you can better promote your site. 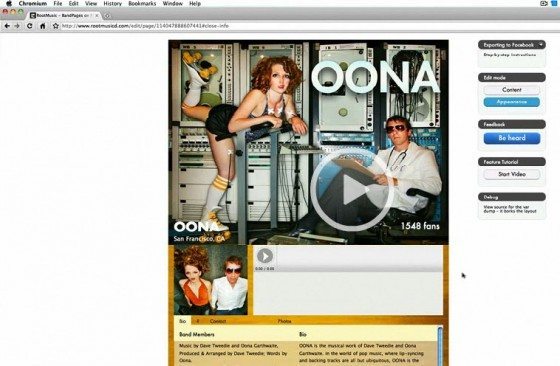 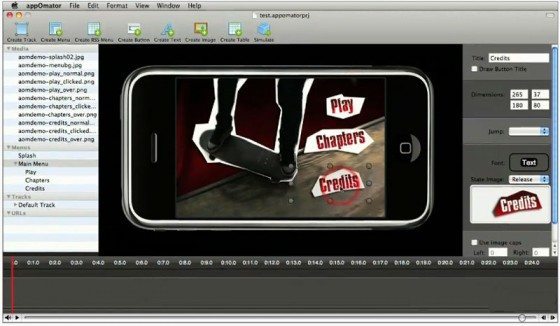 Aren’t you tired of hearing about BT’s or Trent Reznor’s iPhone apps and resenting them for having the cash to employ a team of programming geeks? With NonLinear Software’s “AppOmator”, you can essentially be your own team of geeks without needing to take a web conferencing course on Xcode. Currently for Mac OS X only, AppOmator simplifies creating a basic iPhone app so that anyone who can handle Apple’s iPhoto or iMovie could do it.

Still in the early beta stages, AppOmator is fully functional; there are several dozens of its progeny already in the App Store. Although there are many more features to come, AppOmator can make an app with a splash page, menu pages with scrolling menus, RSS feeds or hyperlinks, videos and music (with or without photo slideshows). The software also handles uploading the finished product to the App Store, seeding it with keywords so people searching can find it, and taking screenshots for the App Store page. You don’t need an iPhone to make an app either; AppOmator simulates how the app will work, so you can test it before uploading it.

While AppOmator itself is free, to upload a finished app requires a one-time $50 upload fee for the person who builds the app with Xcode, and then $15 a month and 15% of your app sales for hosting. You can set the price of your app from free to as high as you like. NonLinear Software has promised support for iPad apps and iAds (revenue-creating ads embedded in your app) soon.

Say you want to drum up some media attention for an event, tour, album or mix CD release etc, but you don’t know where to start. Paying a PR distribution agency to blast out a press release for you may be worthwhile for the time you save and attention you gain. Results are not guaranteed, but an agency’s media contacts mean you will have a leg up as far as delivering the news to the right people.

The service at Beatwire.com specializes in delivering press releases to targeted music editors at more than 10,000 newspapers, magazines, websites, radio stations and other outlets worldwide. They can distribute a press release you write yourself ($149.95 each) or have one of their professional publicists write it for you and then distribute it ($249.95 each). Beatwire also has a Superblast service that in addition to press release distribution, the company designs a custom HTML press release with your graphics and an embedded audio player for your music. Superblast costs $249.95 per release if you write it yourself, or $349.95 for a professionally written release.

There are quite a few competing services for sending out music-related press releases, with varying prices and services. For example, RapidPressRelease.com also distributes to labels, producers and DJs.

All play and no work makes a DJ go nowhere fast. Hustle a little harder, step up your promotion game, and you’ll thank yourself for it later.

Publicity for the Working DJ

Self-Promotion for the Working DJ

The Power of a Name