Traktor Tricks: Double up effects with a loop for a cleaner build.

The Beatslicer and Beatmasher are some of the most useful effects in Traktor Pro. They can be used subtly to create fills that sound almost like they’re part of the original track, or so boldly that  it disrupts the mix completely beyond recognition, and all the gradations in between. After a while, chopping up a beat can not only get repetitive but also disrupt the dance floor. Many producers will often chop-up a song momentarily and at the same time introduce a rhythmic loop to maintain the groove before snapping back to the original song. Fortunately for you , the same result can be achieved with a clever mapping trick that will produce studio quality fills in DJ software.

The reason Beatslicer’s so great for fills is because it messes with the rhythm of the track you put through it, but over sustained periods that rhythm might not keep your audience’s dancing feet glued on. The solution? Bring in a new drum loop, supplied by the sample deck, at the same time to compensate. 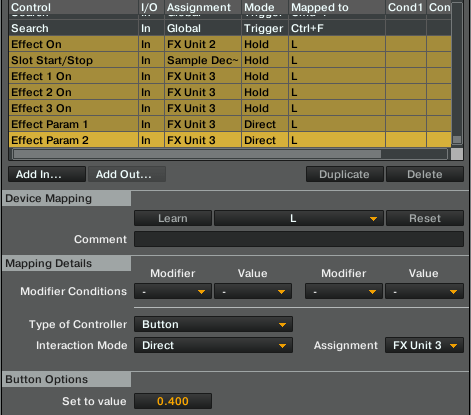 Decide on a button – or ideally a set of a few buttons – that you’re going to use for your ‘instant remix’ controls. Go to the controller manager and set up a New In for the following:

Depending on what you’re going for you might want to engage the instant remix when you’re holding a button and disengage when you let go, in which case you should set the above controls’ Interaction Mode to ‘hold’, or you may want to toggle it on and off: you guessed it, ‘toggle’.

That’s it! Kidding. In a nutshell, though, that’s the concept. There are huge amounts of possibilities with this ‘instant remix’ idea. Listen to these two examples, one of a subtle reworking effect on an already four on the floor track and the other a more pronounced remix of an R&B tune into drum and bass:

Let’s reaquaint ourselves with the beat slicer controls to see how it shapes the sound:

• Buzz turns each slice into a mini loop, which can add a little extra bounce to the sliced loop at small settings and turn the loop into one big glitch at large settings.
• Style and Pattern change how the loop is shuffled around. Style and Pattern set to 1 create a simple loop, and things get crazier from there.
• The second button is a gater. The gater is an either/or choice with Buzz, though.
• The third button makes beat slicer take a two bar loop instead of one.
• The first button resets all parameters, be careful!

For each of your instant remix buttons, you can set a different style of beatmasher. Simply set the Type of Controller to ‘button’, and the Interaction Mode to ‘direct’, then choose your value in the Button Options section at the bottom. The options are all divisions of 1, so .6 corresponds to style 3 and so on. Do this for each of your controls and you’ll be able to instantly trigger the different styles. Be mindful of the fact that if you want to be able to toggle your instant remix and change it without switching it off that you’ll need to get a bit more in depth with your mapping. The easiest way to make all your buttons turn the instant remix effect on but not off is to set them up as we’ve already discussed, except instead of toggle setting the Interaction Mode to ‘direct’ and setting to 1. Then just map an off button that sets the same settings to 0.

If you’re ready to get really deep, you can start to add other effects to the mix. This is where experimentation really pays off as there’s so much scope for an interesting sound bed when we’ve got our sample player drum loop to keep the rhythm danceable (or at least head noddable), but I had a lot of fun with a group effect consisting of Digital Lofi, Phaser, and Filter-92 LFO to create a dubsteppy rhythm that gets even cooler when modulating the speed of the LFO. Just remember that in Traktor the effects banks work in series, so your beat slicer will have to be before any effects you want it to put it through.

Finally, I hear you asking what you’re supposed to do for drum loops. Well, you may well already have some in your favourite tracks; if a track has a loop of drums unspoiled by any instrumentation then you can simply create a loop out of it in a deck and then drag it into a sample deck. If not, then there are thousands of drum loops available online, both for free and from various sample pack providers. To get you started, though, here are three loops: a housey four on the floor, a dubsteppy skip, and a drum and bass style high tempo break.