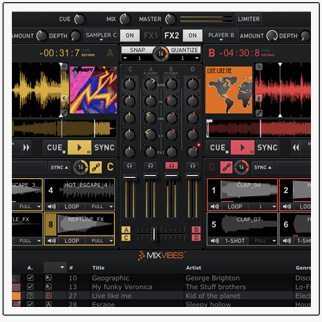 Mixvibes (the company behind Pioneer’s Rekordbox) has been building their own DJ software, CrossDJ, for well over two years – and today they’ve released the newest version. Teased earlier this summer, CrossDJ is a complete redesign and update of the original software, featuring a modular user interface, a 4-channel mixer, and an updated sampler.

The modular interface skin isn’t quite on the level of manuverability promised by the ever-forthcoming “The One” software, but it does allow the DJ to show and hide each element of the interface. Don’t want the sampler unit? Gone. Want to show parallel waveforms at the top of the skin? Click and it slides right in: quick, clean, and easy.

CrossDJ 2.0 also has a very adjustable BPM engine – with beat grid editing that looks more powerful than Traktor’s. The software even allows for granular adjustment of quantization (a la Ableton Live) that ranges from 1/16th of a beat to 16 beats – something that we expect might come in handy when you’re using the two new 8-slot samplers in the software.

Mixvibes has released an official launch video featuring Polocorp showing off some of the features of the new release – see below.

We’re hoping to have some time to test out the new software this week – but in general at DJTT we’re excited by the potential for the smaller players in the DJ software industry to create competition in the market and drive innovation.