American Audio has been known best for their VMS units, and today on the NAMM floor they unveiled three brand new controllers: the VMS DJ, the VMS ELM-C1, and the VMS Jelly. The controllers are all initial prototypes, but we took a quick look at the three units to see what they offer.

The VMS DJ (above) is a two channel mixer with large, low profile jogwheels, standard mixing section and effects controls. The major feature of the unit seems to be the built-in soundcard with XLR outs – and while there isn’t a final price on the unit, we’re betting it will be more reasonable than some of the other competitors out there. 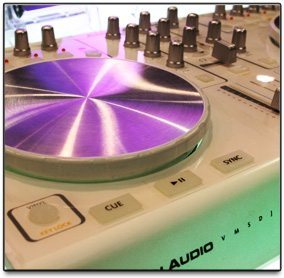 The VMS Jelly (pictured at left) is nearly identical to the VMS DJ – but also glows from inside of the unit through the translucent white exterior. The glowing can pulse to the music, stay a specific color, or scroll through the colors depending on user preference.

But we think the most interesting new prototype unit on the American Audio booth was the smallest and cheapest unit – the VMS ELM-C1 (pictured below). We were told that the price will be sub-$100, and when we played with the unit found that the action on the jogwheels felt better than many of the extreme budget DJ controllers we’ve seen on the market so far. The ELM-C1 does lack a soundcard, and also notably lacks pitch and volume faders – so it isn’t a complete solution. 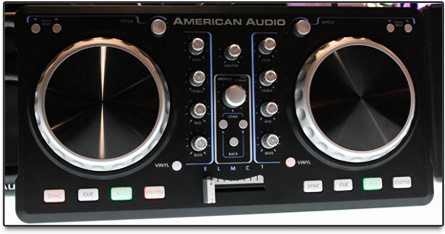 All of the units will ship with Virtual DJ LE – but we think that some of them might really appeal to DJs looking to have a budget controller solution for mixing on an iPad. No final word on prices and ship dates on these prototype units, but stay tuned.