If you haven’t been updated on MixVibes Cross over the last six months, there was a frenzy of development that saw the 10-year-old French company add crucial features like sample decks, quantizing, multi-effects and much more to this low-cost, open-platform DJ software. With version 2.3, Cross tacks on HID integration with Pioneer CDJs and a few other goodies to lure you in. And if you want to use your iPad as a controller, this could be the program for you – read our full review after the jump.

The Bad: A couple of playback bugs during performance. Many newer controllers aren’t supported with mappings.

The Bottom Line: With two 8-pad Samplers, 8 cue points per track, 14 effects, dedicated channel filters, iOS app remote control, and a host of other new features, Cross is attempting to fight its way to the forefront of more digital DJs’ consciousness.

In August of last year, MixVibes stepped into the more sophisticated arena of full-featured DJ programs with the major Cross 2.0 release, and has put out an incremental update every couple of months since. While Cross still doesn’t support full four-deck mixing, version 2 added:

Along with the new interface features, version 2.1 beefed up the internal recorder, allowing independent recording of the sample decks and a stereo auxiliary input for external recording. 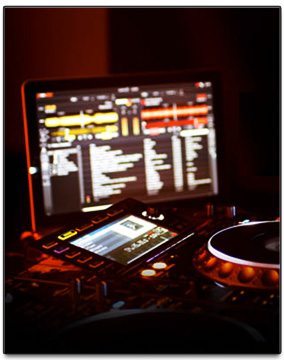 The version 2.2 update introduced compatibility with the new MixVibes Video Plug-in, which lets you play, mix, and scratch video within Cross for an additional cost of $79.99 / 62.99€.

Finally, with Cross 2.3 released in late January, MixVibes added HID integration with Pioneer CDJ units. Every CDJ function (for the CDJ2000nexus, CDJ2000, CDJ900, 850, 400 and 350) is mapped to Cross 2.3, and you can use the CDJs with just two USB cables into a laptop—no soundcard required.

Version 2.3 also added the performance-friendly Slip mode for keeping a song’s continuity while you’re looping and scratching; Start/Brake time settings for decks A and B, and compatibility with non-standard, 14-bit MIDI controllers.

The Cross 2.3 interface presents flexible viewing options to show you only what you need to see on your limited screen real estate.

The mixer layout naturally depends on whether you’re using internal mixing with a controller or external mixing and a timecode DVS. From there, the simplest views show you just decks A and B, the mixer, and the browser. Hitting the spacebar hides the decks and mixer to show the Collection View at maximum size.

The View menu lets you choose to show the Head-Up Display (HUD), or as Cross calls it, the Beatmatcher, a horizontally scrolling display of the two decks’ waveforms to aid mixing. You can also show or hide the samplers (decks C and D), the two FX Units, the “Locators,” what Cross terms the 8 hot cues/loops per track, and the “Sync Zone,” the Cross term for the Snap and Quantize values module. There are many viewing options within the browser, as well. You can open or hide the album cover browser, the column browser, or the Info panel, which shows the detailed, editable meta data for a selected track.

Music must be imported into the Cross Collection. From the Cross browser, you can import your iTunes music and playlists, music from any folder on a connected drive, or the music and playlists from your Traktor, VirtualDJ, or Rekordbox collections. Our Traktor import went off without a hitch. After importing, you can bulk analyze all your tracks; Cross analyzes for the BPM/beatgrid, gain level and track peaks. You can create multiple Collections if you want. The Browser’s dock buttons can be rearranged or removed. Buttons include Files, a computer hard drive directory; Prepare, a holding area for stashing tracks you want to play later; and Autoplay, where you can drag tracks and launch Cross’s auto-mixing option. The Cross browser includes some novel features, such as a column that shows icons to indicate the audio quality of the track, and the browser’s Preview Player has a handy Track Seek bar for quickly jumping through a track you’re previewing.

Cross calls its decks A and B Players and its decks C and D Samplers in order to distinguish their functionality.

The Players are very detailed and allow you to show/hide the Beatgrid editor, the cover art, and the Locators, which are the 8 saved cue points or loops per track. The Locators show you their starting point time within the track, which can be helpful, and of course the Locators are shown within the zoomable waveform display, as well as the full track view below the scrolling waveform.

One of the most refreshing features of the track Players is the Beatgrid Editor. When you mouse over the waveform, a Pencil icon appears. Click it, and a really good set of Beatgrid editing tools appears. These include buttons for shrinking and expanding the beat interval, moving the Beatgrid left and right, defining the downbeat, halving or doubling the BPM, adding a user Beatgrid, etc. Frankly, I wish every DJ program made Beatgrid editing this straightforward.

Cross 2.3 includes very simple, yet highly welcome FX Units – assignable to the decks, master output or sample decks. Taking up a slim row of space above the track Players, the identical FX Units both include a drop-menu for selecting one of the 14 effects; another menu for routing the effects to either the Player A, Player B, Sampler C, Sampler D, or the master output; and knob controls for effect Amount and Depth. T

The effects include Low-pass and Hi-pass filters, Echo and Delay, Phaser and X-Phaser (a phaser with a fixed feedback and tempo-synced LFO), Flanger and Jet (a flanger with an LFO), Transform, Chopper (a wild auto-filter with LFO), Crush (bit-crush distortion), Bliss (white noise with filter resonance), Brake (turntable stop), and Roll (beat repeater). The function of the Amount and Depth knobs vary per effect, but it’s pretty intuitive to get a hang of them. Beat-syncing on the tempo-dependent effect is spot on, and if anything, more tempo-related effects would be nice.

For the most part, the effects sound very good, with Hi-pass, Jet, and Chopper being highlights. However, the limited tweakability of the effects will have Traktor heads missing their old standbys.

Cross 2.3’s C and D decks are 8-pad samplers with three sample play modes: Loop, 1-shot, and Hold (playback for as long as a pad is held down). You can load and save Sample Banks, and MixVibes includes a number of Loopmasters sample banks to get you started.

New to version 2.3, Hot Slicing Banks and Hot Chromatic Banks autoload material from a Player deck to a Sample deck. In Hot Chromatic Banks, 8 identical sample slices are loaded to the Sampler according to the set Auto Loop length, and then each one is pitched up chromatically to affect their sound. Hot Slicing Banks load consecutive samples to the sample slots to give you the ability to quickly produce 8 chopped up samples from a track that you can then juggle.

If you’re going to take full advantage of Cross’s samplers and other features, you’ll probably need to get familiar with the software’s MIDI mapping ability. While Cross supports about 60 MIDI controllers with official MixVibes mappings or user mappings on the MixVibes forums, many of the newer controllers don’t yet have mappings.

Without a mapping, Cross won’t recognize a MIDI controller with any kind of default setting, so you have to make a new mapping in the Preferences window. You can try to duplicate a mapping from another controller and go from there, but I didn’t have much luck doing that for the Stanton DJC.4 controller I used. But creating a new MIDI map is fairly straightforward. In the MIDI Preferences, you just start a new map, name it, and then begin combing through the available MIDI settings in the right-hand column of the window. When you find one you want, say FX 1 On/Off, you click the green ‘plus’ sign button next to that parameter, and then activate the control you want to assign that parameter to. You also have options for setting the type of MIDI control. For example, for buttons, you have the option to choose a Holder Button or Toggle Button control, and for knobs you can choose Direct Fader/Knob for knobs with start and end points, and Inc.-Dec Normal Fader/Knob for endless encoders. It took me about an hour to create a basic MIDI map, and you’d probably want to spend some more time to go deeper if making Cross your software of choice.

With MixVibes embracing the iOS takeover, you also have the option of controlling Cross wirelessly with iOS apps on an iPad, iPhone or iPod touch. Cross iOS remote apps provide bi-directional communication between the desktop Cross software. The names of the loaded tracks and all playback information (current tempo, current playback position, remaining play time and so on) are visible on the remote app screen. You must create an ad-hoc network from your computer to connect Cross with the Cross iOS apps, which the manual shows how to do.

Cross 2.3’s internal recorder lets you record to WAV, AIFF, Ogg, or FLAC at the audio resolution specified in the Audio Preferences: either 44.1, 48, 88.2, or 96kHz. You can also choose to record tracks from any or all of the following inputs: decks A, B, C, or D, the master output or an auxiliary input (chosen in Audio Preferences). Just choose all the recording inputs you want, and after recording, there will be separate audio files for each input in the Cross Recordings folder on your hard drive. This is a potentially useful feature that I haven’t yet seen elsewhere.

We tested Cross 2.3 on a 2012 MacBook Pro with a 2.6GHz Intel Core i7, 8 GB RAM, and OS 10.8.2 (Mountain Lion). That machine comfortably exceeds the minimum system requirements for Cross, and for the most part, the software performed with aplomb.

One continual problem that occurred may be cause for concern, which was one particular cue point—Hot Cue 2 on Player B—would either not respond to its trigger command, or occasionally it would activate itself unprovoked. That and some erratic behavior of a loop, which turned off unprovoked, were the only problems I experienced while using Cross. Still, those are pretty big concerns when considering performing in public, and they aren’t behaviors I’ve experienced with any recent versions of Traktor or Serato.

MixVibes Cross has come a very long way from where it was just a year ago. It’s still a software that aims both to make DJing for beginners palatable and to provide high quotient of creativity and flexibility during performance while keeping the interface and workflow clean. It succeeds on both fronts. By incorporating sample decks, multi-effects, new looping features, dedicated filters per channel quantizing and other high-leverage features, it’s got a place in the working DJ’s software conversation.

To become a bigger player, Cross may need to clear up a couple of the bugs that—at least for me—came up during performance, and perhaps align itself with some new, hot controllers. But the several areas in which Cross has even exceeded some of its contemporaries, as with the Beatgrid Editor, Browser Preview player, internal recorder, and iOS remote apps, show that MixVibes is keen on innovation and that we should expect even better things to come.

Markkus Rovito is DJTT’s Tech Reviewer. Bother him on Twitter to get him to review your favorite new gear!

Native Instruments’ Komplete 14 Bundles: Which is the best for you?

Worth the wait: Nektar Aura’s latest software update is a beatmaker’s dream

Mixxx – the free DJ software – gets a major update with 2.3.0 release

Review: The One DJ 1.2 Software