For every controller that hits shelves, there are always a few more great ideas that don’t see serious play time. Today we look back at those conceptual products that got us all excited but never delivered the goods. Plus, to really spice it up, we are giving away two unreleased controllers to a few lucky readers.

Numark has a strong history of  debuting prototype controllers front-and-center at the NAMM show – and in 2012, they did exactly that with the MPC DJ controller. The grid of 16 pads actually ended up being distributed around various Numark models – including the Mixtrack Pro 2 and the new NS7 II – but the MPC DJ never made it beyond the protective plastic box on the showroom floor. 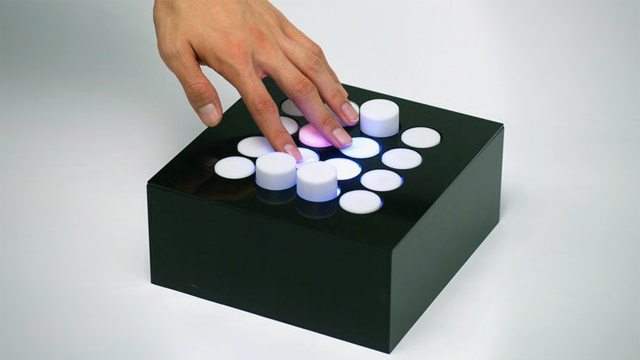 This Midi Fighter-eque controller engineered in Tokyo first made an appearance on DJTT in 2011. The controller included 16 motorized pads that could be twisted or pressed at any given time – suggesting a new interaction possibility. In our original interview with one of the product designers, they expressed interest in releasing it on a larger scale, but nothing ever came to light.

Watch a demo of the Poco Poco in this performance video released in June 2012.

Amplive was one of the first artists to work with DJTT in building what would later become the Midi Fighter Pro controllers, so when he came to us asking for help building a Frankenstein MIDI guitar, our engineering team was up for the challenge. There are MIDI guitars out there, including the button-laden Kitara, but Amp wanted a guitar-shaped MIDI controller that went far beyond emulating the instrument. Watch him using a newer version of the controller in his recent Boiler Room LA set:

Many fans have asked for commercial versions but this one remains a one-off project to this day. If you really want to express your self through the ax, consider Ean’s infamous Guitar Hero experiment which turns any Guitar Hero controller into a decent MIDI interface. 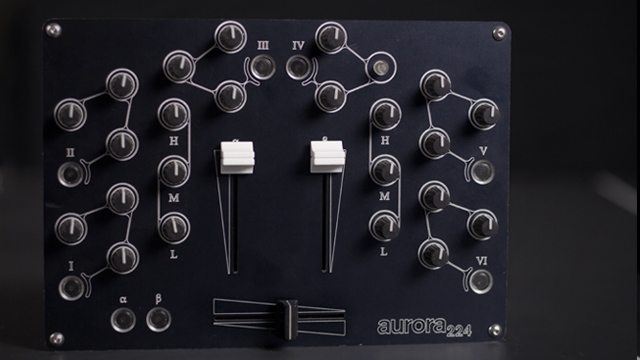 We’re a fan of any team that decides they want to do things better than anyone else – and that’s what Matt, Mike, and Maro aimed to do when designing the Aurora controller in 2008. The unit – which is still an opensource project that anyone can download the designs and specs to build themselves – featured unique backlit potentiometers and ambient lighting, both of which were software controllable via MIDI. As with many project controllers, it failed to gain much traction beyond passing interest online.

You can still learn more and check out the complete project page here.

John Beez had an incredible idea for  a crossfader that not only moved from left to right on a X axis, but also up and down on the Y axis to provide an additional level of control (in the video, it’s pitch, but it could also control effects and other parameters). The above video from 2010 was the last time John provided an update, just over a year after the original reveal of the project. It still seems like this would be a viable feature from a company like Vestax but so far, nothing has come of it.

After the success of the Midi Fighter, we explored an expanded Midi Fighter with just one knob and fader. This prototype never made it past the design phase and instead became the Midi Fighter 3D with the analogue control coming from the unique motion sensors instead of physical components.

These prototype controllers were among the first MIDI controllers aimed at giving Ableton Live users dedicated controllers. UK-based Kenton finished both of these prototypes just in time to show at the Sounds Expo 2006 (watch the video of them being first presented here on SonicState), but only one of them ever made it to market – the smaller Killamix Mini on the left – and even then in only limited supply. 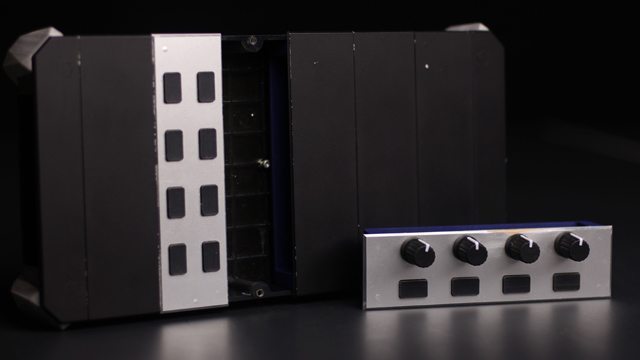 DJTT worked on building our own modular controller for a little while – with a form factor similar to the Allen & Heath K2 controller. Each module would slot into a slender bay, making them hot-swappable for dynamic DJ interfaces. Ultimately it proved difficult to make a modular controller affordable in this style, which is possibly why so many other modular concept controllers don’t make it on shelves.

Obviously we weren’t the first gearheads (or the last) to consider bringing the modular concept to digital DJing within a single form factor controller. That title is likely reserved for the team behind the Mawzer mixer, which promised the ultimate controller for modular aficionados – and was scheduled to see a complete public rollout in the summer of 2005. But cost (over $1300 just to get a basic setup) and size became a major issue for the unit – so much so that after numerous delays to the release, the project was canned.

Watch this video from Musikmesse 2007 of the product manager Raphaël showing off the Mawzer.

There have been a few forays into the world of new standalone DJ systems – and in 2006, the Pacemaker attempted to capitalize on the success of handheld devices like the iPod. The Pacemaker allowed manipulation of two tracks with the one device, with all of the normal mixing and transport controls built into the circular touch pad and ribbon strip just above it. There were major delays on the release of the unit, followed by a major price obstacle at launch (>$700) and of course one major complication: the smartphone revolution.

After a brief period of sales, the product was shelved – but the talented team has since moved on to build a Pacemaker application for the Blackberry Playbook mobile tablet. Check out the app here on the official Pacemaker site. 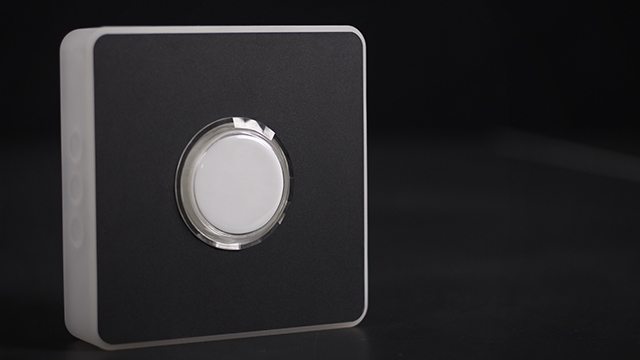 The UNO might be our most-spotted-in-the-background controller by commenters on YouTube in the last 8 months. Nearly everyone who walks through our studio instantly notices the single-button controller and exuberantly imagines its perfect use (we’ve heard: airhorn samples, triggers “the drop”, activating a club’s CO2 cannons, and more). We created it in response to a joke entry to our Midi Fighter X design competition, and will always hold a special place in the pantheon of controllers that almost were.

When we last checked in on the project, we had heard that the designer of Otto, Luca De Rosso, was looking to shop the device around as a potential partner unit in the future. A serious mockup of a controller with this exact design was spotted behind closed doors with a major manufacturer at NAMM 2012… perhaps there’s a future for the OTTO yet. 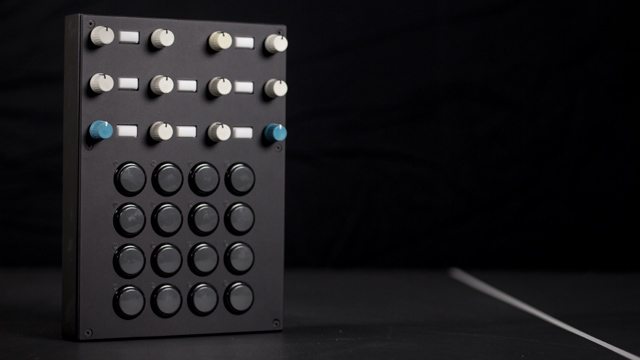 Originally designed for Bay Area’s own Bassnectar, these large Midi Fighters were built to replace the M-Audio Trigger Fingers that graced Lorin’s DJ booth for years. Equipped with 30mm arcade buttons and MPC style spacing – this is the largest Midi Fighter in existence. Because our engineering team was deep in the middle of launching the Midi Fighter 3D and working on other products at the same time, we decided to pass the project on to our friends 60Works, who teamed up with Moldover to build the same design, in use on tour today.

Do you want one of these controllers? We’re actually giving away one (working) prototype at the end of this article. 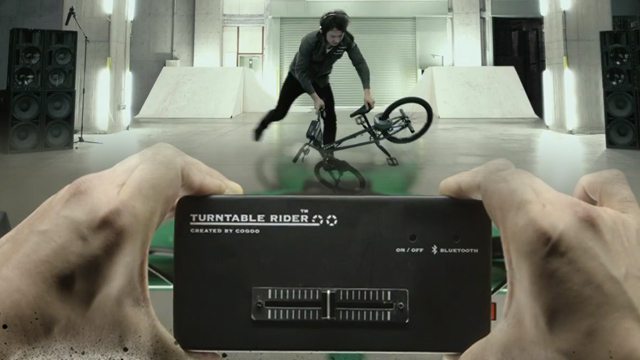 Riding bikes and DJing go hand-in-hand, right? This project was sponsored by a Japanese bicycle sharing service, and while we’re pretty sure that the video was doctored to make it was more impressive, there’s no doubt that adding MIDI control to everyday objects like a bicycle is a pretty cool endeavor but never saw the light of day. Learn more about the project and its genesis in our original post back in April 2012. 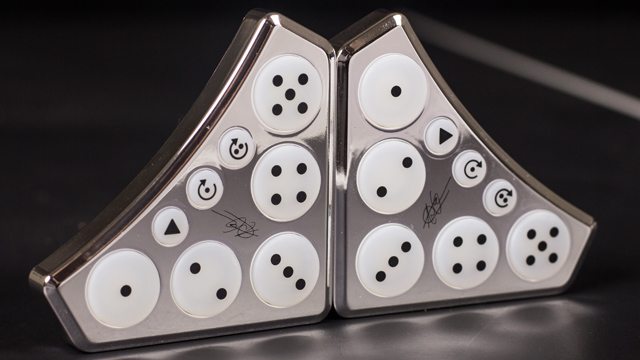 We’ve got two awesome controllers to give away – the Bassnectar prototype Midi Fighter and the above-pictured Novation Dicers with a chrome finish and Ean’s signature (never commercially released). Just enter using the contest widget below:


Tell us in the comments section: