Every time a modular controller project or concept comes to light in the DJ industry, there’s always a ton of interest from the masses – just look at some of the comments on our recent article about unreleased controllers. Palette has sparked that same interest, but with a fully backed Kickstarter project it’s on track to be one of the first widely available modular controller systems for DJs.


The Good: Completely modular layout – arrange the individual elements in any layout. Can connect up to 32 controls in each layout. Sends both HID and MIDI signals.

The Bad: No wireless connection. Individual components (faders, buttons) aren’t quite up to the quality that DJs expect from pro-level gear. A bit pricy when comparing to buying other DJ/producer controllers that lack the modular capabilities.

The Bottom Line:  Palette isn’t a “game-changer” – but it does bring customizable modularity into the realm of realistic options for DJs. Seems ideal for supplementary controls to a larger setup, and you won’t find this level of rearrangement possible on anything else.

The team behind Palette wanted to create a freeform hardware interface – meaning a system that would be completely re-arrangeable and user-customizable based on the needs of different users. More specifically, those users all could have different processes and approaches that might work best with a unique arrangement of controls. Instead of focusing on the creating these arrangements on the software side (where TouchOSC and Lemur dominate), Palette is all about giving users real hardware to touch and feel instead of just tapping against glass.

Calvin Chu and Ashish Bidadi started working on the project that would become Palette while they were studying Mechatronics Engineering at the University of Waterloo in Ontario, Canada – and after school the duo were accepted to a hardware accelerator program that allowed them to work in China with components suppliers and hardware manufacturers to prepare prototypes for their Kickstarter.

MODULES TO MAKE A WHOLE 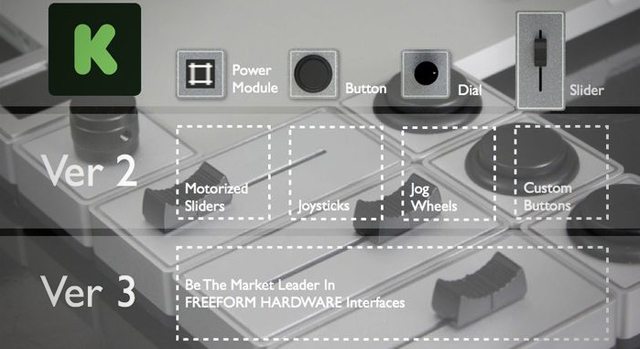 The aluminum modules that make up Palette are designed to be plug-and-play “just like Lego” – and for the Kickstarter launch will come in just four different flavors (with more planned for future versions of the Palette system – they’re considering joysticks, trackballs, motorized sliders, foot pedals, etc):

The input connectors on each module have a similar feeling to old-style iPad/iPhone connectors, a relatively thin and wide connector that lightly clips into place.

The modules themselves have an aluminum housing with a matte finish on the top, a ring/halo LED just inside the top edge, and a lightly rounded black plastic base where the input/output connections live.  They’re the right height to place around a standard laptop, but will sit a bit low if trying to use them alongside mixer-height gear.

A Palette setup starts with the power module acting as the central hub. After connecting the power module, a chain of up to 32 modules can be connected. There are no limitations on arrangement, or what type of modules you can add, or in what order. Each of the components are hot-swappable, so if you unplug every single module and rearrange them into a completely different layout, they’ll retain the same functionality when plugged back in.

A Palette kit can output HID or MIDI – and the signal from each individual control will be able to be adjusted in a forthcoming software that will “recognize software installed on your computer, and automatically pull functions that you can map to the modules”. This obviously becomes a bit more complex with DJ applications – unless the Palette team is planning on writing their own version of Xtreme Mapping.

The Palette team designed their own custom PCBs for the project, and purposefully chose a microcontroller that would allow them to achieve latencies comparable with most popular MIDI controllers.

AS A DJ CONTROLLER 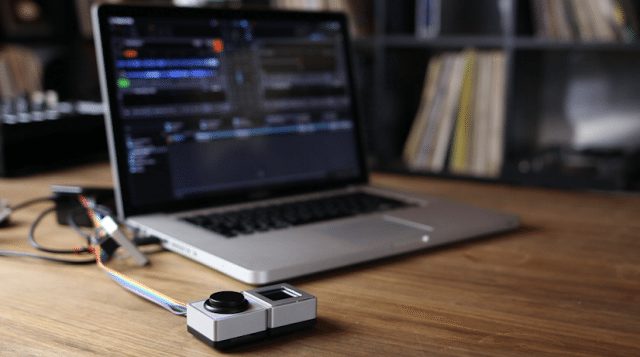 We’re not convinced Palette isn’t going to replace your primary DJ controller or mixer simply because of the cost associated with getting a set of modules that would be equivalent to, say, a Kontrol S4. Additionally, the components that we played with aren’t quite of the same quality that you might find on other DJ controllers – the line faders won’t be sufficient for rapid cutting and abuse, and the arcade buttons have a resistance that finger drummers and controllerists might scoff at.

(Editor’s Note: The units we tested are still beta prototypes – they’re still taking feedback and finding the final components that will be used.)

It’s easier to envision a Palette kit as a complimentary or secondary set of controls around a larger DJ setup – a few use cases that come to mind include:

Palette could also work very well along with other modular controllers in a DJ or live production rig. Need to add a few knobs and faders around your traditional button grid? A Palette kit would be perfect for that. Palette also makes a lot of sense for controller users whose needs are always changing with each gig. Many visuals effects artists have this exact issue – with new surfaces, screens, and projects that would benefit from unique controller layouts.

As with most hardware projects, the biggest issue is actually moving from a prototype phase to a completely finished product that gets manufactuered to completion. Not only is there a financial hurdle (investing in tooling, parts, etc), but there’s also the risk of unknown problems arising during the actual production process. Palette has solved the funding process by meeting and exceeding their Kickstarter goal (they’re just past $115,000 Canadian dollars at the time of press).

Calvin estimates that production will begin in February of 2014, with the first production run finishing in June. Since he’s been on the ground in China and in discussions with manufacturers, this is likely a realistic estimate. But many Kickstarter projects miss their mark – just ask Keith McMillen (read our article about the process behind funding and creating the QuNeo here).

Either way, the fact that Palette is poised to be a piece of modular controller gear that won’t get mired in pre-production makes a unique offering in the DJ world.

New Traktor Product To Be Announced At WMC; Dubfire, MK…