A member of the Dj TechTools community has reverse engineered the VCI-100 firmware to produce a brand new 1.4 version that adds a number of new features and bug fixes including high resolution jog wheels and pitch faders. Just when you thought the VCI-100 might finally be on its way out- boom! Dj TechTools comes back with something cooler.  Continue reading for a full list of improvements, and a video demonstrating a easter egg in 1.4- Disco mode!

WHAT DID WE FIX?

A BRIEF HISTORY OF THE VCI-100 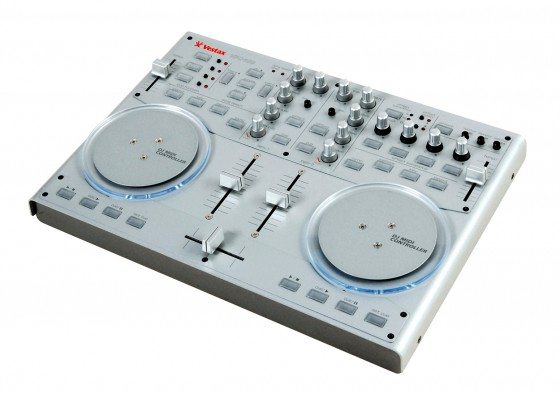 The Vestax VCI-100 was first released. It marked the first truly serious dj controller on the market and paved the way for broader acceptance of controllers in djing. The Controller ships with firmware version 1.1.

In my original Remix magazine review of the VCi-100, I pointed out some deficiencies with the unit including a scratching issue and at the same time SkratchWorx posted the video above demonstrating the jog wheel lag problem. Vestax responds by releasing firmware version 1.2 which fixed the “jog wheel ramp up issue”.

I created a arcade hack of my review unit (gasp!)  to improve the button performance of the VCi-100. As a result of this video and my review of the unit I was not asked to pay for the controller (thank god) but instead got invited to meet with the president of Vestax in LA. During that meeting I demonstrated my “re-design” of the VCI and Toshi proposed a special Ean Golden version be released to the public.

Its important to note that the video above and the VCi-100 were largely the catalysts which formed the community that is Dj TechTools today.

After many months of development and urging, I convinced Vestax to create a new firmware version 1.3 that enabled all of the performance features I envisioned for the controller.  This firmware was the basis for 100 VCI-100 special edition controllers that sold out in just a few hours.  The new firmware was equipped with:

We tried in vain for the past year to get Vestax to produce a new 1.4 firmware and everyone basically assumed it was never going to happen until last month when we got a random email from Dj TechTool’s forum member DaveX saying:

“ummm.. no big deal but I just reverse engineered the VCI-100 firmware and added high resolution to support to the jog wheels and pitch faders”

Our response: “Holy shit! Can you fix a few other things too?” Lucky for everyone- he gladly said yes. For the past 2 months, the team at Dj TechTools has been working with Dave to fine tune the firmware and make it the ultimate touch up to every VCI-100. There is no question, this is the ultimate firmware and will possibly keep VCI-100’s around for years to come. All new VCI-100’s sold in our web store will come equipped with firmware version 1.4!

Big ups to DaveX for working very hard with our staff to produce the ultimate VCi-100 update- everyone cant thank you enough.

MIDI- Coming Soon on a Ipad near you..