First spotted by DJTT reader Laserbeam on the DJ Techtools forums, Allen & Heath are teasing the release of a brand new piece of gear, the Xone:PX5. We know very little about this new piece of gear so far, but keep reading for some clues and speculation.

Note that the header image contains an outline of the Xone:DX. We don’t know that it has anything to do with the Xone:PX5, but keep reading.

The teaser for this new Xone:PX5 came in the form of an Eventbrite invite (see flier above) to an upcoming preview show at Berlin’s Kantine Am Berghain, a smaller venue directly next to the infamous Berghain/Panorama Bar.

The last Allen & Heath Xone product to have an X in the model name was the Xone:DX, a four-channel hybrid MIDI controller and external mixer designed originally for Serato ITCH. The Xone:DX was discontinued in 2012, but had a dedicated fan base that got incredibly upset when the new Serato DJ software was announced to not have support for the unit. 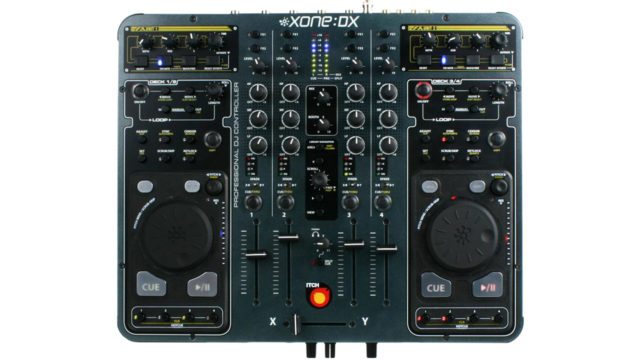 Of course, instead of DX in the product name, it’s PX5. Could the P mean that instead of being DJ-focused, this new piece of gear is Producer focused?

Doing investigation work into upcoming products is extremely fun, so we thought we’d dig a bit into the only other bit source of information we have so far: the artists playing the event.

No artist can resist teasing a new piece of gear they’re working with on their own social media, even if they do it in a very indirect way. In the caption on this Instagram photo, the top-billed techno artist from the event writes (in German, roughly translated): “Something is missing here”.

With the background of the image, it would seem that this new Xone:PX5 is designed with Traktor in mind – with four decks running in Traktor Pro. There’s also a Maschine Mikro off to the left, and many of the other artists playing the event seem to regularly use Ableton Live when playing out – which would suggest there is a live production focus.

What do you think the Xone:PX5 will turn out to be? Let us know your thoughts in the comments on this article.

Loco Dice Interview | How I Play